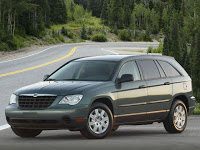 The Associated Press has collected some info on the past and present vehicles of presidential candidates. It’s easy to find the car lovers amongst them – those who don’t know an inline-4 from a V8 – and those who must have at least modicum of taste.

Hillary first drove a ’62 Olds Cutlass. Sneak a peek or more thru Bill or Hillary’s autobiographies, and you soon discover that they either love cars or remember them well. Mrs. Clinton is now, of course, driven in many’a Secret Service vehicle, although she makes note of a “Ford hybrid.”

As does John Edwards, in addition to an ’04 Chrysler Pacifica (indiciating the value of John’s vehicle is equivalent to the price of one haircut) and a 13-year old GMC pickup. John’s first car was a Plymouth Duster. Bill Richardson drove a used Mustang in a former day, but enjoys his Jeep Wrangler now. Barack Obama makes use of a Chrysler 300C, but once “extensively” used his grandfather’s Ford Granada.

Giuliani? “I don’t drive. I navigate.” Sure, Rudolph. He drove a used Dodge whilst newly licensed. A little more specificity, please.

John McCain knows where it’s at. The Arizona Senator drove a 1958 Corvette but has a Cadillac CTS now. Good job, John. Mitt Romney drove a 2-year old American Motors Rambler Classic in 1965 when he went to college. Mitt, who was involved in a head-on crash in France while driving a Citroen DS in 1968, has possession of an ’05 Ford Mustang Convertible and a ’62 Rambler American.

Fred Thompson speaks about an old red pickup. Fred hasn’t elaborated yet. Mike Huckabee used to be the driver of a Mercury Montego but makes use of two Chevrolet’s now: an ’07 Tahoe and a ’95 Silverado.

What have we learned? Unless some of these cars are using base V6’s instead of the implied V8’s, the candidate’s vehicles likely contribute to an average of 16/21mpg, city/highway.

Keep talking, guys. Gimme all that ethanol and biofuel and dependency on foreign oil stuff.