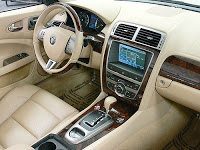 “Everything in moderation”, my big brother said to me a couple weeks back. He was talking about Coca-Cola, butter, and french fries in relation to his marathoner’s body. By contextual realignment, let me apply his statement thus: there are some habits – design, styling, accessorizing – in the automotive world that are ‘good in their own way’, but when taken to an extreme….. not so much.

They are the expression of personal preference. They are used by manufacturers to spice up their model ranges. Extra aggression, added luxury, image enhancing. But automak

ers forget the lesson, “Everything in moderation.” And it appears that automakers as a whole, simply represented here by Jaguar; Subaru; Ford; and Hyundai – are losing the plot. When reading about car design and car designers the last number of years, words like minamilism, clean, untouched keep popping up. Phrases like, let the lines carry the design.

Put another way: there’s no need for extras on every part of the body to convince people the

car looks good. Here’s a few examples of the trend. Remember, these cars are simply representative of a growing theme. They happen to be cars I am somewhat fond of.

Jaguar’s ‘gorgeous’ new XK coupe and convertible are indeed handsome cats. Interestingly enough, upon the debut of the new XK, chief designer Ian Callum said that the XK really shouldn’t be chosen with the wood interior finish. The aluminum was a far better choice. Wood may have its place. Aston Martin makes good use of it inside the DB9. The Chevrolet Corvette a

ctually balsa wood in the floor where you can’t see. However, you’re stretching the idea when you consider that competing cars include ultra-modern cars like the Porsche 911, BMW 6-series, and Maserati GranTurismo. If the public already thinks you’re stuck in the past, Jag…. offer aluminum only. 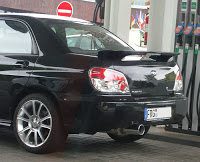 as long traded in the rally-car-for-the-road feel of the Subaru Impreza. Over the last short number of years the Impreza has gone through numerous styling changes. There has been one constant: the large rear wing. Most every STi features some appendage you could lay out and sunbathe on. Rarely would you see a WRX without a similarly broad, but much more discreet wing. To pull off the WRC look, one needs an F15 landing deck. Understandable. But when people ask the VW dealer to equip their Jetta likewise – please. The latest Civic sedan has such clean and eye-catching lines. Please resist. Some do not.

Go-faster stripes don’t work. There is an unproved theory that go-faster stripes are actually go-slower stripes. That heavy extra coat of paint or hefty layer of stickers can’t assist acceleration times, can it? I dare say it may not. Stripes and all other such ext

ra paint applications do a fair job at making a modern F1 car look like a modern F1 car. Ugly, that is. (I’m trying to continue with the ‘moderation’ theme, but I’m struggling to discover the proper application of the dreaded stripes.) Regardless, somewhere out there – on Ford GT’s and Shelby Mustangs for two – stripes belong. On the performance version of Ford’s own Fiesta? No thanks.

A car does not p

ossess big wheels without also ascertaining big tires. A larger diameter in your wheel/tire combo will have the effect of maximizing your contact patch with the road. A tire of the same width will have greater contact with the road if the diameter of the tire grows. Typically, though, as diameter goes so goes width. Added width increases this effect. As diameters increase, so must the profile of the tire decrease. The profile of the tire is the width of the actual band you see between wheel and fender. As the profile decreases, so your contact patch increases. Increasing contact patch increases the grip your tire has on the road, thereby aiding handling. 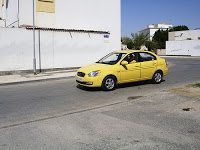 nce has given rappers; tuners; Hummer drivers who never go off-road; and even the typical consumer the impression that big wheels are a must. Plus they look good. Problem #1 is added weight vs. acceleration. Upsizing two inches on a Civic-sized car will inevitably deteriorate your drag strip times. Problem #2 is added weight vs. handling. The weight you’re adding happens to be added right where you don’t want extra mass. Your dubs are as unsprung as your sixteen’s, and therefore producing exaggerated impacts and dull turn-in. However, they do look good. They draw the eye. And big wheels can be done tastefully, even on a tiny car like this Hyundai Accent. 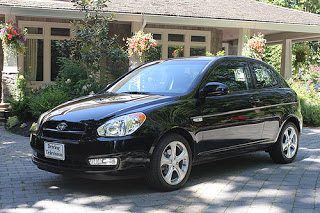