With Subaru’s latest Impreza (discussed by The Good Car Guy here weeks ago), the Japanese misfit is attempting to project a new image. Automakers are cons

tantly trying to position and reposition themselves, most often to their detriment. BMW’s consistent portrayal of their ‘Ultimate Driving Machine’, along with the overwhelming thrust toward sportiness, has greatly enhanced their success.

Digression. For Subaru, the idea that all-wheel drive sells cars is still the foremost in their recent print ads, which appear on the inside back cover or front cover of big-time American car media like Car & Driver and Motor Trend. Interestingly, where Subaru ads once pushed cars like the WRX for their performance credentials, the current ad touts 170 horsepower and touch-screen navigation. Hip hip, and indeed, hooray. “It’s what makes a Subaru, a Subaru.” But is Subaru, one of my personal faves, losing the plot? Just a question. (goodcarbadcar@gmail.com)

Hyundai, only pages away from Subaru’s ad in Car & Driver, continues to proclaim the merits of their extended warranty. Curiously, the ad in which they ask, “If a good warranty points to a good quality car, what does that say about the car with the best warranty?” is an advertisement for their most expensive car, the Azera. Curious, but not misguided. Hyundai’s confidence in their cars, and the 10-years/100,000 mile warranty that came with it, also met with genuinely improved quality. Doth not the potential Lexus ES, Acura TL, or upper-level Camry buyer care about Hyundai’s long-term care? Of course. So Hyundai declares their warranty on their sub-luxury car as much as they tell you about its luxury. That’s what Hyundai does.

Flip just two pages in C/D’s latest issue and you see Jeep advertising ‘fun’ in the Wrangler. No joke. The ad’s small text discusses the details of why Jeep = fun, while the main taglines suggest this: “Fun. Headquartered and manufactured in Toledo, Ohio.” The vehicle lives up to the suggestion the ad presents. A believable advertisement is a good one.

Lincoln places an MKZ (nee Zephyr) at blocked off a railroad crossing and then says this, “Like an astronaut counting down to launch. A racehorse stomping at the gate. An archer’s arrow trembling just before release. My dream is to unleash my potential. Ready or not, here I come.” That’s so dorky. 263 horsepower doesn’t suggest a ready or not kind of driver. Only pages before; Lincoln’s domestic competitor, Cadillac, advertises its MKZ competitor and all the CTS’ tech-worthiness. Cadillac has managed to sell a bit of image, helped by the CTS-v and its Corvette powertrain. I know people who could compare a G35 or new 3-series with the CTS. But it’s ads like this Lincoln one, this feigned attempt to show, “We’re cool too”, that cause brand’s to suffer dwindling sales. The MKZ is a Ford Fusion. Ford Motor Company would be better off selling an SVT Fusion for $32,000 USD than attempting to market the MKZ as sportacious.

Lexus advertising has always possessed some cachet. A high quotient of cachet, in fact. Two full pages, a third of the way into the C/D. A slogan in the top right, “The pursuit of perfection.” A little fine print in the bottom right. A few words, thoughtfully considered, in the top left. But the picture of the GS and the overarching safety theme in this ad jibe so well with all other Lexus advertisements that have come before. Infiniti loves to explain technology in their print advertising.

September’s C/D, near the middle of the mag, shows the new G Coupe and the following sentence. “Why variable valve timing is better tha nfi xed tim ing.” Infiniti proceeds to tell us all, in a simple way, why the G Coupe’s engine makes 330 horsepower. The new G Coupe, says Infiniti, is “Intensity captured.” Cool.

That’s all. Toyota knows the Highlander’s key demographic. It is informally known as a soccer mom vehicle, so sell it to them. And the husband’s of the soccer mom’s, too.

So the one and only major line in the ad is, “The all-new 2008 Highlander Sport…. with backup camera.” The picture shows paint, fire hydrants, lawn chairs and assorted stuff parked behind the Highlander. Got the message.

C/D’s back cover is surely expensive. Mercedes-Benz markets the new C-class here. That’s Mercedes all new for ’08 small sedan. Telling the story of the car’s development is an interesting one, especially for Mercedes. Driven around the world 600 times (the equivalent thereof), testing door hinges to handle the weight of a 200-lb man, and testing in Scandinavia and Namibia…. that may sell a car that in its previous generation was not the quality piece to which M-B consumers had become accustomed. So what does Mercedes ask you now? “Is 14.4 million miles of road testing excessive? That depends on what kind of car you’re building.” Further down, they answer the question for you. “Nothing is too excessive when you’re building a car like this.” 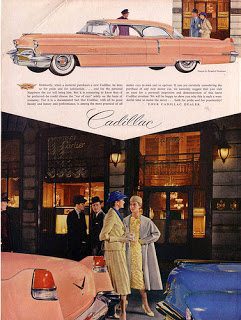