Boston Red Sox slugger David Ortiz watched his Mercedes-Benz SL65 AMG go unsold on eBay recently. 18 bids came (and went) on the hi-lux coupe-convertible which had a smidgen over 4,000 miles on the odometer. Ortiz bought the car after the ’04 BoSox World Series victory for $205K and then added around $35,000 in accessories. (Think stereo and wheels.) Reminds me of the time George Costanza tried to impress a potential lady friend with a 1986 Chrysler LeBaron convertible that once belonged to Jon Voight. Didn’t work, especially since the real owner was John Voight; not Jon, and a leftover chewed pencil in the car didn’t match the bite marks the real Jon Voight left on Kramer’s arm. I digress. Perhaps high rollers who enjoy their AMG Mercedes’ care little about the previous owner’s slugging reputation. However, with 604 horsepower on board, the SL likely had little trouble getting Big Papi to Fenway and back home in record setting time……

In an effort to enhance the image of diesels in the United States, Volkswagen held a contest for the highest mileage diesel Volkswagen on the road. A verifiable 562,000-mile (899,200 km) Jetta, model year 1986, was brought forward by an Ohio man whose Jetta frequently achieved over 50mpg. Syl Schmid will now drive a Touareg V10 diesel for 6 months. As for the oldest VW diesel; it was a 1977 Rabbit from California….. 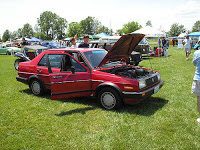 Nissan’s upcoming Skyline GT-R, the first GT-R to be officially imported to North America, may come under tight resell restrictions. With a looooooong queue already forming and the obvious knowledge of higher second-hand values than new MSRP’s, Nissan may announce beforehand that warranties on GT-R’s will be voided if sold within the first year of ownership. Is this a case of Nissan attempting to scrounge all the money for itself? I doubt it. It’s more likely a case of Nissan protecting prospective owners from paying $100K for a $70K car…..

In other Nissan news, a fuel-efficiency meter will eventually become standard equipment on all Nissan models. The gauge will start out in the Altima and Infiniti G35 as well as three Japanese market cars. Nissan studies have shown that people using prominent fuel-efficiency gauges will return up to 10% more efficient fuel economy. Nissan’s gauge will show real-time and average efficiency, but Nissan reminds that results ‘may vary based on individual driving style’…….

en released relative to the newest, best-selling Honda. The next Accord’s V6 will punch out 273 bhp from a 3.5L engine. The new 4-cylinder will come in two states of tune, punching out 180-200 bhp. The hybrid is gone, but interior space specs now place the Accord in the EPA’s large car category, with more space than either the Camry or the Fusion.

13,470 deaths occurred in the USA in 2006 because of crashes involving at least 1 car or motorcyle operator. The National Highway Traffic Safety Administration thus plans an $11million campaign that’ll run through Labour Day including thousands of police agencies and a slogan: “Drunk Driving. Over The Limit. Under Arrest.” The operators who caused those 13,470 fatalities were all breathalyzed and showed Blood Alcohol Concentration levels over .08.