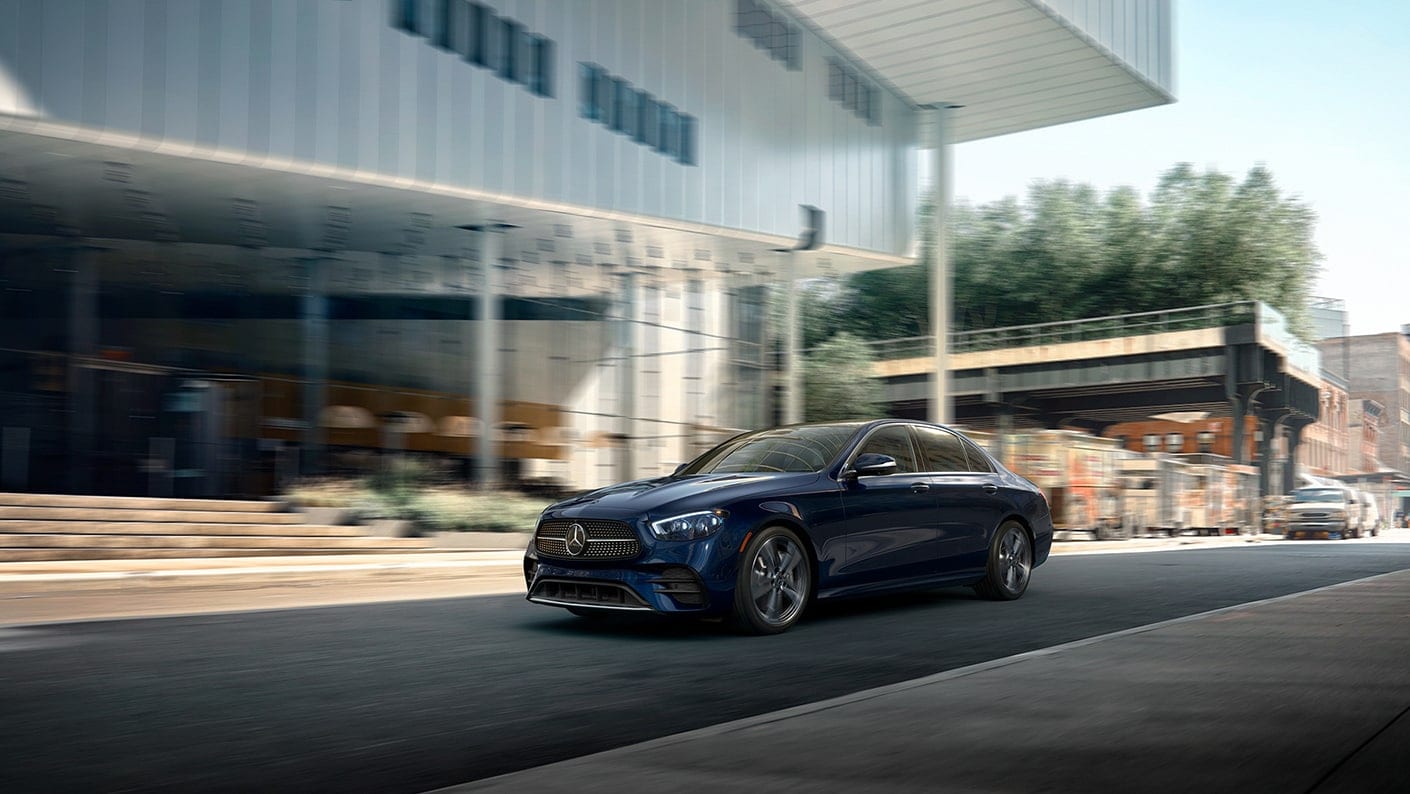 The Who's Who of Midsize Luxe, Including One From a Luxury Upstart

Mid-sized luxury cars, however, are where the two types of cars cross paths. They need to be luxurious, comfortably carry passengers, be stylish, and above all be great value for the amenities provided.

With that in mind, we present the top 6 mid-sized luxury cars coming in 2021 for your consideration!

The Mercedes-Benz E-Class has a storied history, from the awesome racing car derived E190 Evo cars of the early 1990s, to the early 2000’s AMG E sedans that were the ultimate in sleeper cars. Today, however, the focus is on the E-Class itself, as the AMG branch of things has certainly moved those specialized cars into performance car territory.

The E-Class is powered by one of two powertrains, a 2.0L turbocharged inline-four with 255 HP, or a 3.0L twin-turbocharged inline-six with hybrid assist that combine to give 362 HP. Both mate to the wheels through an 8-speed automatic.

What Mercedes has done with the E-Class, however, is balance performance and comfort on a dangerously thin razor’s edge, and pulled it off. The ride is plush and comfortable, especially if you option in the air-ride system, but the steering response is progressive and confidence-inspiring, with the engines both providing creamy smooth power the moment your right foot demands it.

The interior has paired TFT screens, one as the dash and instrument cluster area, the other as a fully touchscreen infotainment system. The new iteration of the MBUX infotainment software is a little confusing at times, with some items under categories that make no sense, but after about an hour of fiddling about with it, you should be familiar with where things are.

Otherwise, plush leather, swathes of brushed aluminum, and even a couple areas of soft-touch plastics all feel right in line with the premium price tag the E-Series commands. 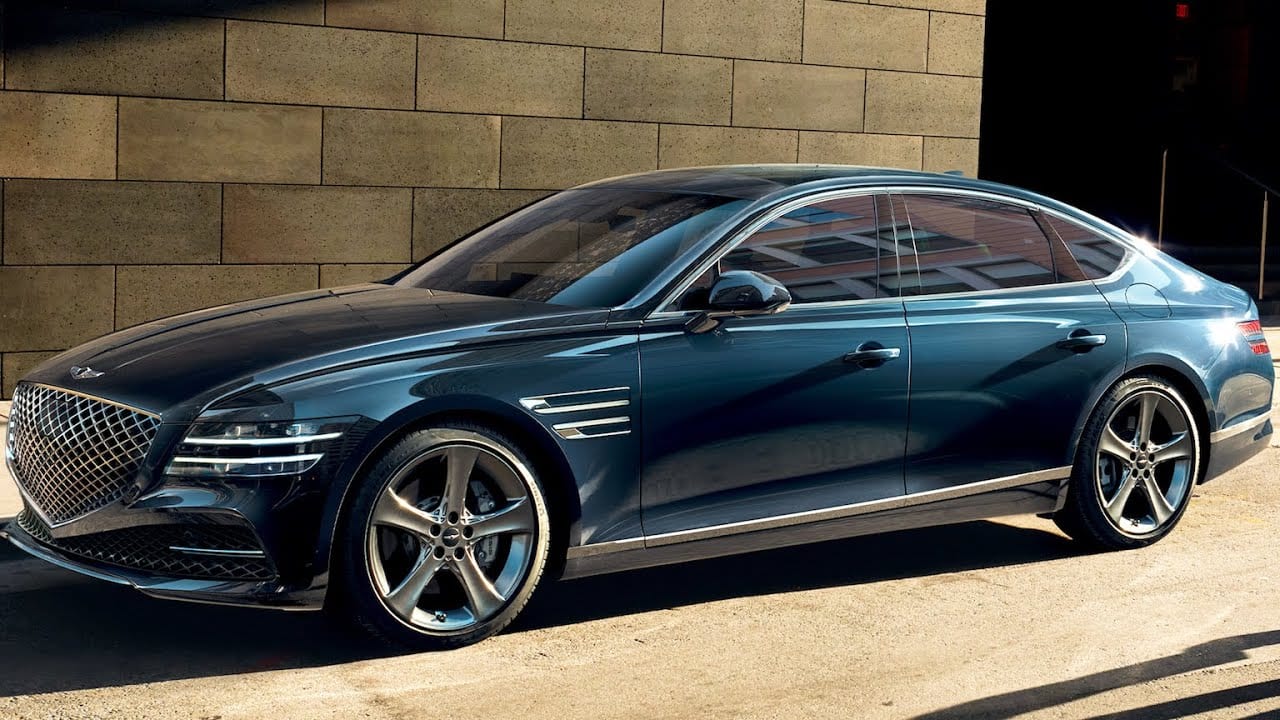 Genesis decided to do away with the last car and build an entirely new car from scratch for the 2021 G80.

Borrowing the engine from the last generation Kia Stinger, Genesis reworked it to provide 300 HP from a 2.5L turbocharged inline-four and produce a lot of its torque low down in the rev range. This gives the G80 tons of muscle to get its generally lightweight (at least for the segment) body going.

The interior is also where Genesis has dialed up the luxury car amenities. A prominent infotainment screen is central on the dash, with large swathes of wood grain finish and leather covering the rest of the dash. The climate control and seat heating/cooling controls are central and operated via an easy to read and easy to use dial interface. Seats are extremely plush and bolstered not for sport, but support.

Not much information has been fully released yet about the G80, as it is expected to hit showrooms before the year is out and start deliveries in 2021. Still, if the G70 and G90 are anything to go off of, this is going to be the best value in luxury mid-sized cars bar none. 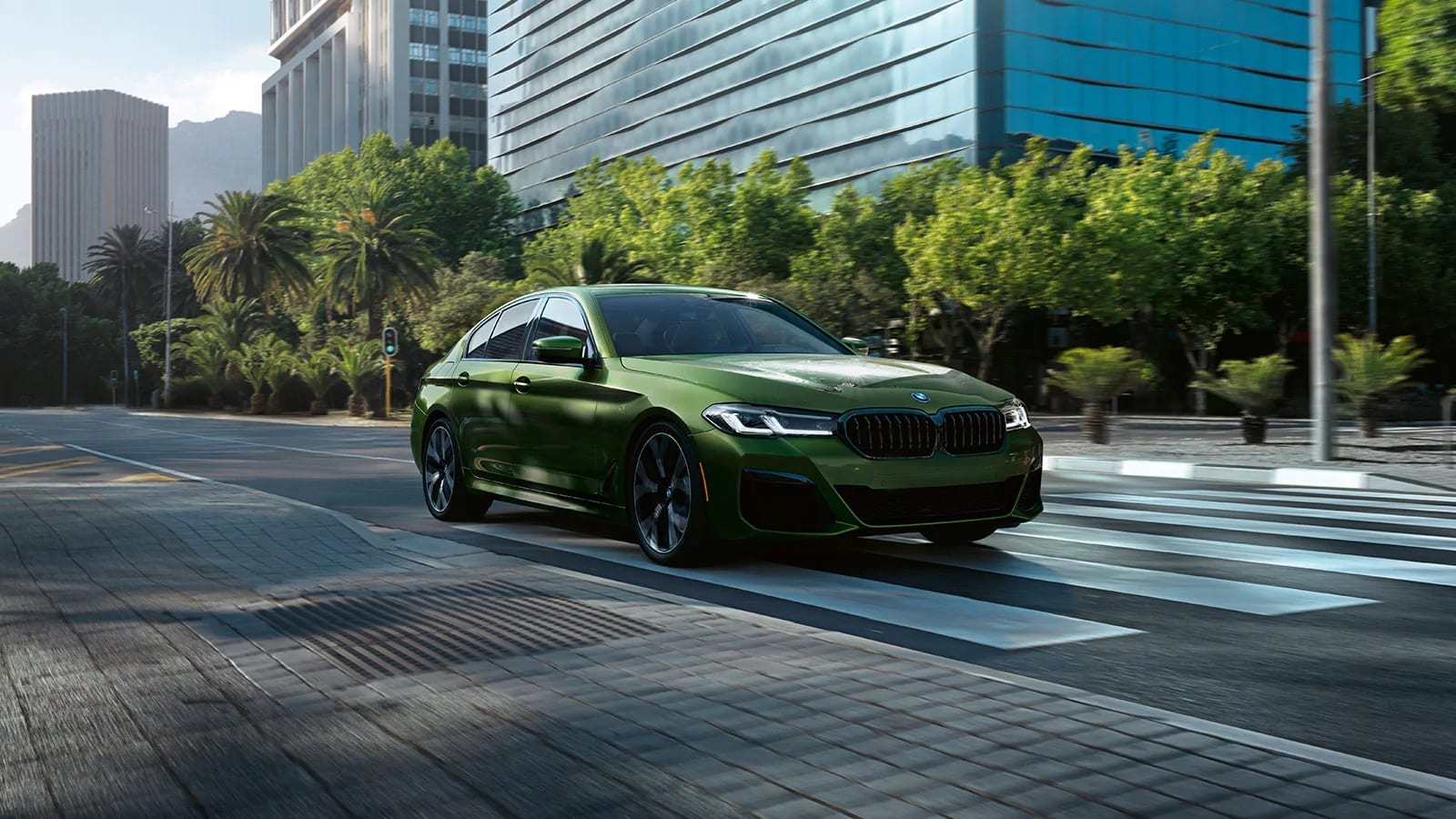 BMW’s used to be sold under the moniker of “The Ultimate Driving Machine,” and for the longest time, they were. Now, however, BMW has taken its middle child in the range and padded it with a few pillows.

The 5-Series is the second most popular of BMW’s numerical model scale, well behind the 3-Series, but still quite an important car. As such, the model range spans from a 530i with a 2.0L inline-four turbo with 248 HP, through a 355 HP twin-turbo 3,0L inline-six, to the firebreathing 4.4L twin-turbo 523 HP V8 at the top of the range on the M550i.

As well, there is the option of adding a 48-volt mild-hybrid-assist to the 540i’s inline-six engine, giving it a little more grunt to get you going.

The biggest shock, and the biggest reason the BMW is ranked 3rd, is that the steering in the 5-Series is bland. That is a word that should never be applied to a BMW. There is just no life about it. It functions, it will turn the front wheels of the car in the direction you want to go, but there’s no involvement, no feedback. And that docks a full point off of what could have been a strong placing for the 5-Series 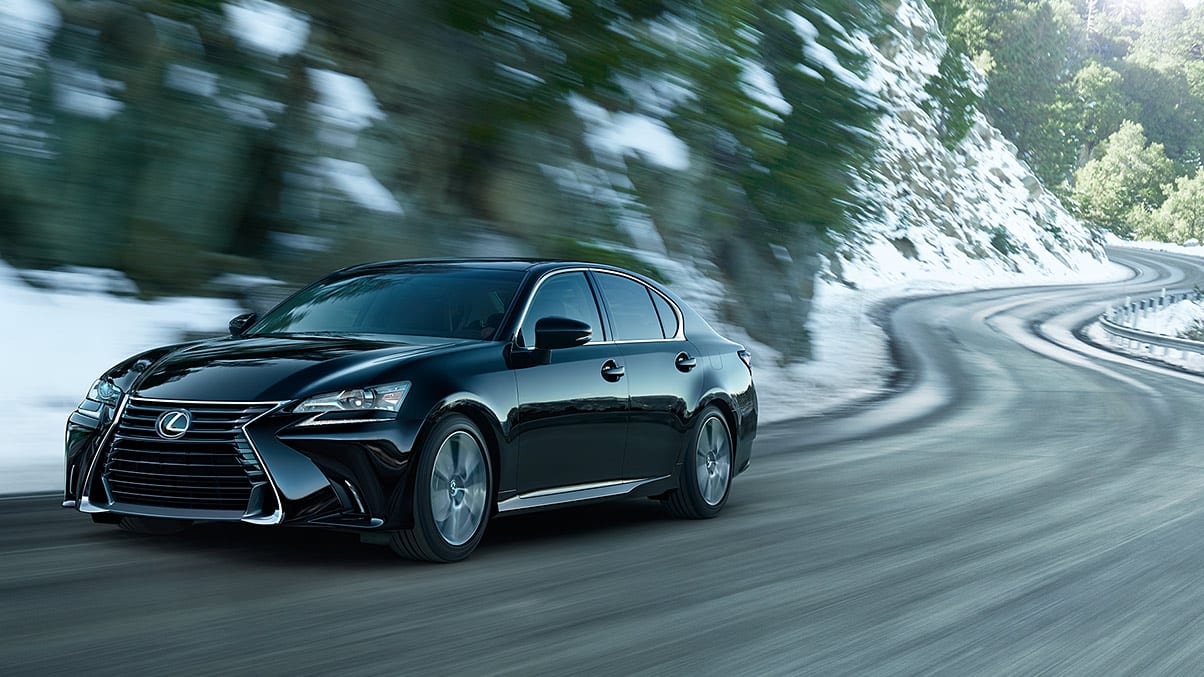 The GS comes with only one engine, a superbly designed 3.5L V6 that purrs out 311 HP. It doesn’t roar and snarl like some of its rivals, nor is it so quiet that it doesn’t even seem like it’s there. It makes just enough noise to be pleasant but not intrusive.

Available AWD and F Sport packages add suspension and dynamic traction control options, but the base car itself still comes with a full host of excellent features. These include the standard lane departure warnings and blind spot sensors, through to an intelligent 8-speed automatic that quite literally studies your driving style and what driving mode is selected, and shifts at the precise point to maintain traction, power, and fuel efficiency. It’s damned near telepathic.

The let-down with the GS is that, unlike both its bigger and smaller brothers, for once the interior is not the big selling point. Compared to a BMW or a Mercedes, it is easily the most premium, but compared to other Lexus cars, it’s just a bit bland. Comfortable as anything, with lovely leather and plush seats, but uninspired. 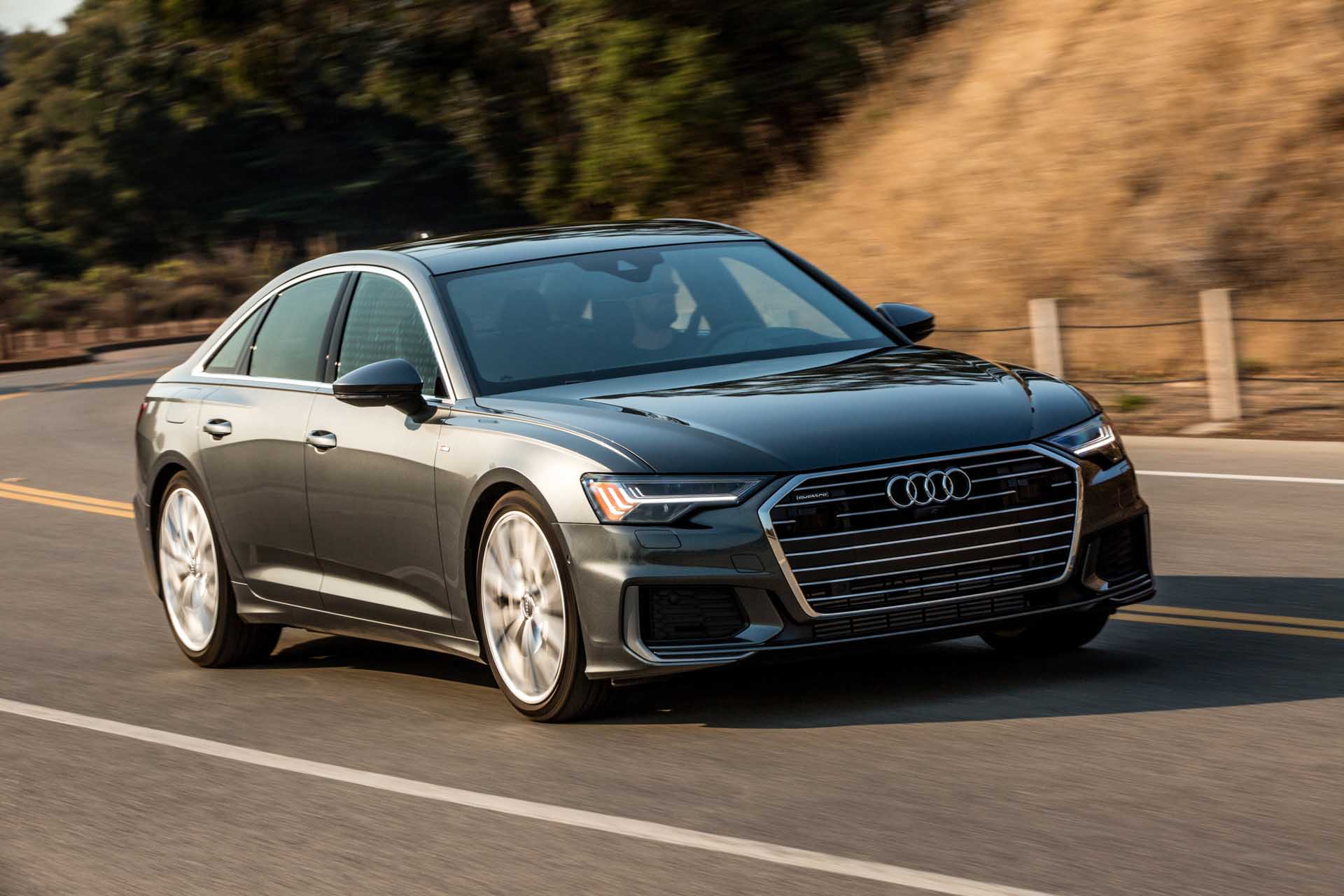 Audi builds some of the most technologically advanced cars coming out of Germany. This is well on display with the Audi A6 Sedan, which comes loaded to the gills with a 360 view camera system, 10.1 inch infotainment screen, and with a little extra spending, you can get full on radar-adaptive cruise control.

All this technology is important, as it makes Audi score well in safety and driver awareness reviews. Where it doesn’t score well, however, is in updating its styling.

While there’s nothing outright wrong with how things look about the A6, it’s just that the look has stayed the same ever since the big Audi revamp in 2011 that saw many models take on new, angular looks.

Power is provided by either a turbocharged 2.0L inline-four with 248 HP, or a twin-turbocharged 3.0L V6 with 335 HP, both with a 48–volt mild-hybrid-assist drive. A 7-speed automatic with sport shift and Quattro AWD are standard on all models.

It’s just a missed opportunity for Audi, as while the interior tech and the engine tech advances in leaps and bounds, the exterior design desperately needs a refresh. 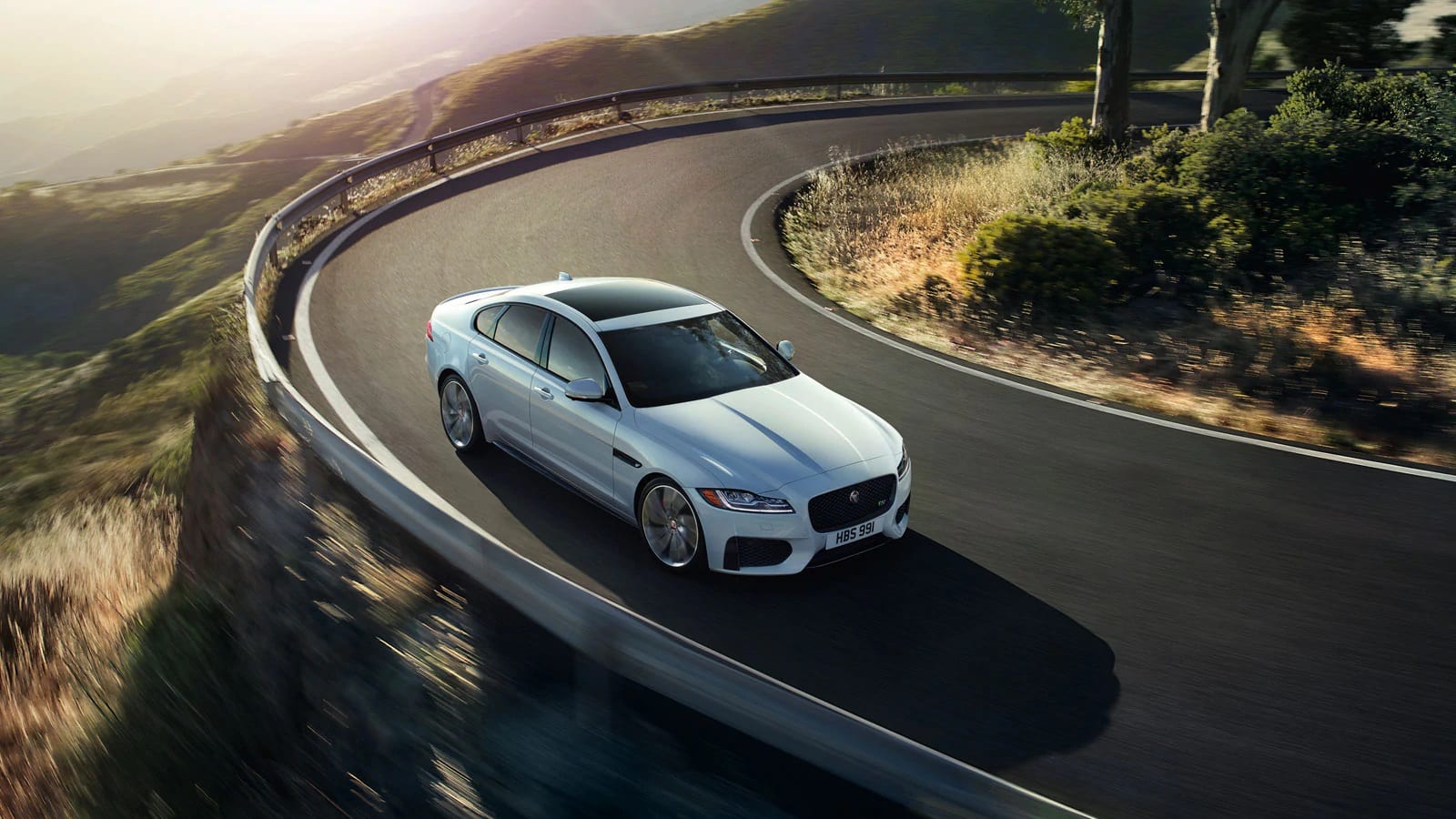 Jaguar used to be the paragon of British comfort and luxury for the common man. If you couldn’t afford a Rolls Royce or a Bentley, you could still realistically squeeze yourself into a Jaguar and enjoy the good life.

Now, however, with Jaguar starting to flounder in recent years, they have slashed prices (and features!) across their lineup to try to reorient towards the new market that demands CUVs and SUVs. As such, the rip-snorting 380 HP supercharged V6 that could cause earthquakes with its exhaust note has disappeared in the to mists.

What is left behind is just the 2.0L turbo inline-four with 247 HP. Which, in a car as heavy as the Jaguar, is lackluster.

As well, the interior has been stripped of much of it’s higher tier attachments, and is now just a pretty barren place with leather seats and a functional infotainment system.

It is redeemed somewhat by keeping a few of the things that made the XF a popular car in the first place. It has excellent handling, a chassis that is both taut and compliant, the smooth ride Jaguars are famous for, and enough room inside to properly transport four adults in comfort.

But, in the end, as Jaguar reorganizes itself, it’s just not enough to save the XF from last place.