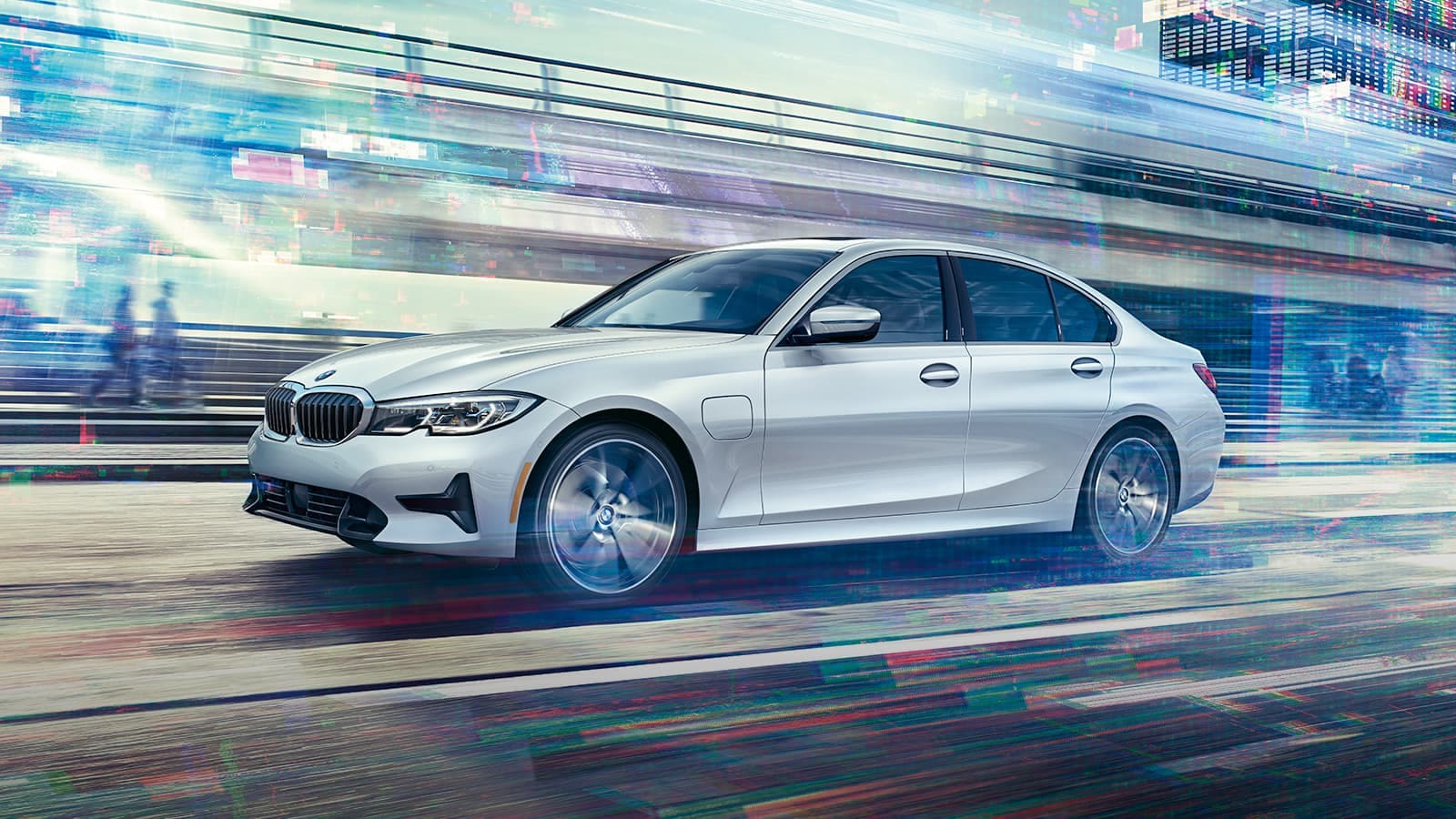 Cars to Get Where You're Going in Comfort and Style

The Small Luxury Segment Has Never Looked This Good

While the budget small car and small sedan segment is a massively popular one, there are those out there that are looking for something more than just a commuter or a car to do the grocery shopping in.

Be it as a status symbol, or a reward to one’s self for doing well in work/play/et al, small luxury cars are where the focus is not mainly on interior space, features, and engines. No, indeed, the focus is on premium comfort, high-grade materials, and, being honest, a price tag that makes sense, but more in the “exclusive” range.

This is an extremely popular category in some of the largest economic cities of the world, including New York, London, Shanghai, Tokyo, and others. Size that makes sense in a city, features, and comfort to make the drive worth it.

We’ve narrowed down the top 6 small luxury cars that you can get coming into 2021. So trade that stock, earn that bonus, and reward yourself with one of these beauties!

The BMW 3-Series has, for decades, been the standard-bearer for a pricey but obtainable sports sedan that could both tear up a racetrack and cruise down the quietest highway. The 2021 3-Series continues this tradition.

Powered by either a turbocharged 2.0L inline-four that produces 255 HP or a turbocharged 3.0L inline-six producing 385 HP, the 3 gets going in a hurry. New for 2021 is the option to couple the 2.0L engine with a mild-hybrid-assist feature that, unlike most hybrids, is there to boost power and take up the slack during shifts, instead of being there to assist with mileage, despite what the marketing materials say.

What really sells the 3-Series, and almost always has, is the driving dynamic. The BMW has a very mature, positive feel in its steering, and the poise of the car itself is second-to-none. It is happy to cruise a highway or freeway with little effort, but show it a corner with a little vigor, and it seems to hunker down, wag its tail, and beg for the next corner.

The interior is also refreshingly modern. A nice large infotainment screen with a very nice sat-nav feature, fully TFT instrument cluster, well-appointed with leather and wooden finishes, and a chunky steering wheel to wrap your hands around to know it’s a special car.

Thankfully, the massive and controversial grille of the new 2021 BMW M3 has not translated down to the main model range, keeping the 3-Series looking smart, sporty, and elegant. Top marks for that. 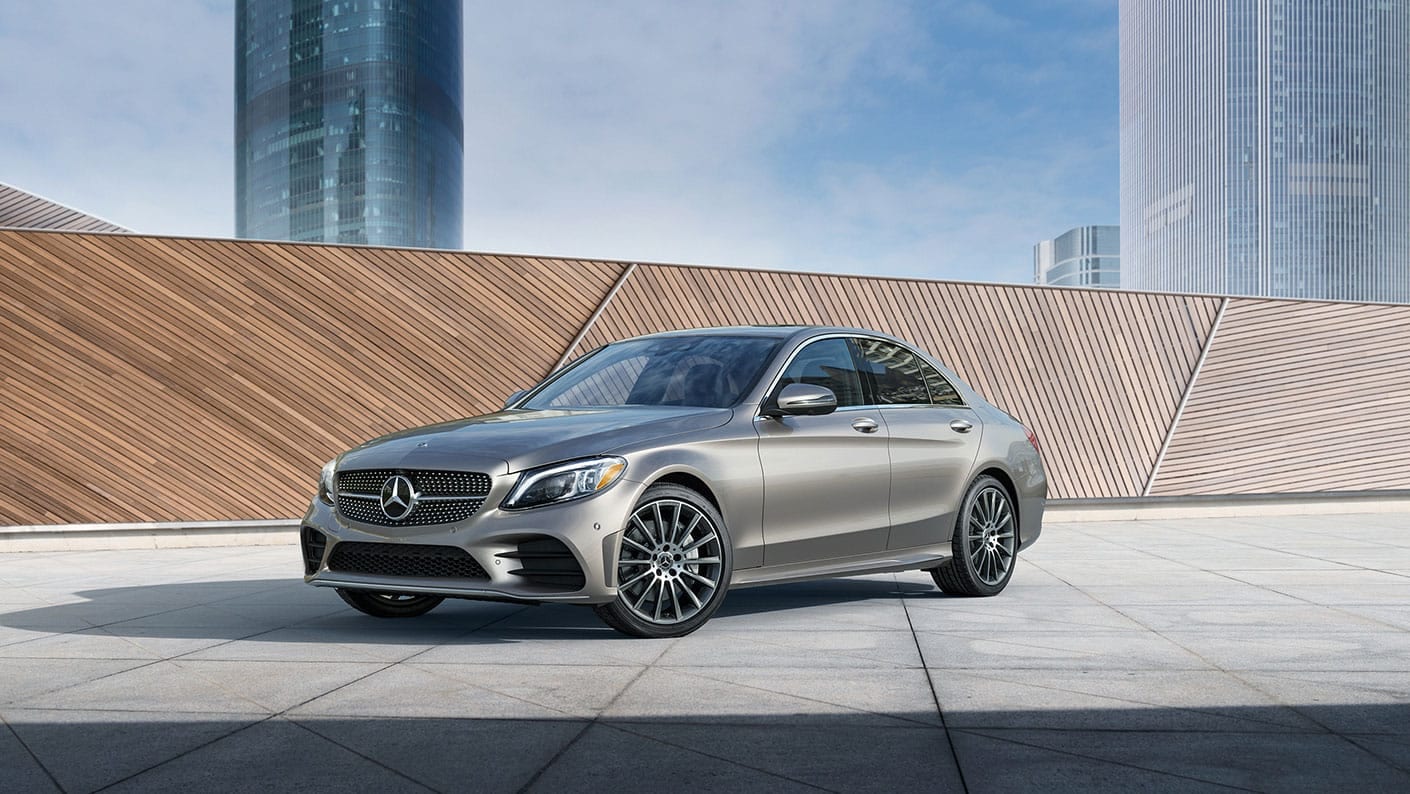 While Mercedes-Benz loves to shove all the latest and greatest tech into their S-Class flagship luxury sedan, the honest and humble C-Class gets 80% of all the neat stuff, and has a few little tricks it likes to call its own.

Powered by a 2.0L turbocharged inline-four, the C-Class sedan and coupe both make a respectable 255 HP with 273 lbs-ft of torque. Compared to some on this list, this might sound a bit low, but for the mini-Merc, it is just right. Helping that is the fact that Mercedes has recently embraced using more high-quality composites as well as durable aluminum in their manufacturing, reducing overall vehicle weight.

The interior, however, is where the party tricks come into play. Due to the high vaulted roofline and the sudden dive to the trunk, the rear seats in the C are enormous. Even a 6’1″ tall person will fit with headroom to spare, and the seats are premium leather with lovely plushness to them. The center stack is also lovingly finished in wood grain, and all the buttons and interfaces feel tactile, with good positive “clicks!” to them. It is just genuinely a nice place to be.

However, that massive interior space does cause one of the few drawbacks, that being the trunk being smaller than almost any other rival on this list. However, it is still easily large enough to hold a full grocery trip’s worth of food, or a couple of golf bags if you want to head out to the links. 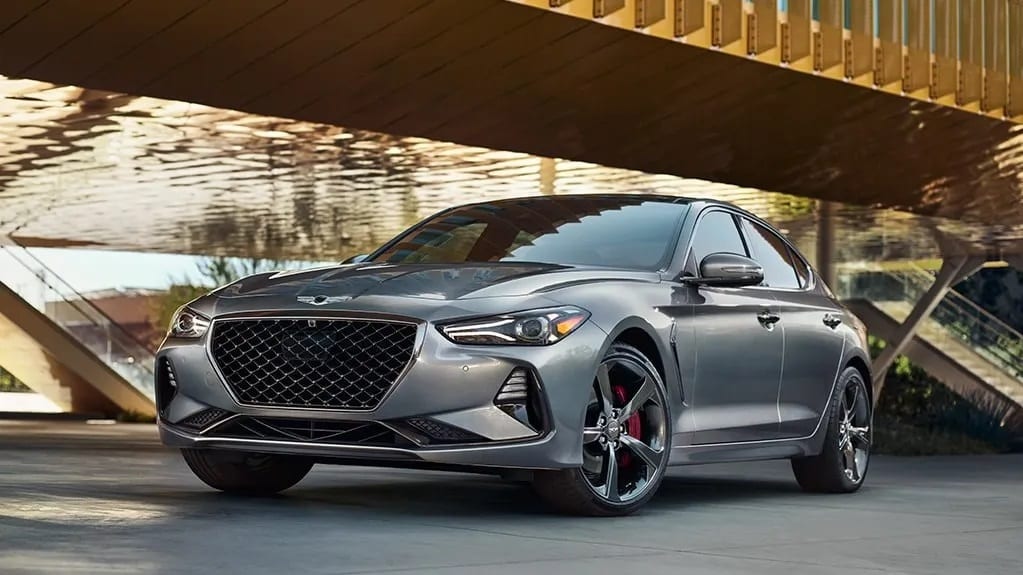 Genesis is a brand that is still relatively new to American shores. The luxury arm of Hyundai, the South Korea luxury cars are built well, have many standard features that would cost you an arm and a leg with other brands, and have a surprisingly fun-to-drive feel to them.

Powered by either a turbocharged 2.0L inline-four that puts out 255 HP or a twin-turbocharged 3.3L V6 with 365 HP, the car has plenty of grunt to get it moving in either the RWD or AWD versions. There are two transmissions available, a surprisingly excellent 8-speed sport-shift automatic, or a lackluster 6-speed manual.

The manual is the key disappointment. The clutch has no real feel for the bite point, and the shifter sort of sludges its way into its gates instead of snapping in. The G70 is redeemed, however, with an extremely well set up chassis and suspension that gives it a driving feel that rivals a BMW 3-Series in terms of sportiness.

Set up much more as a sports sedan than a 4 person luxury car, it still has leather everywhere, is immensely comfortable, and has nice materials everywhere inside. The back seats will fit someone that’s 5’5″ comfortably, but are otherwise quite the tight squeeze for large passengers. 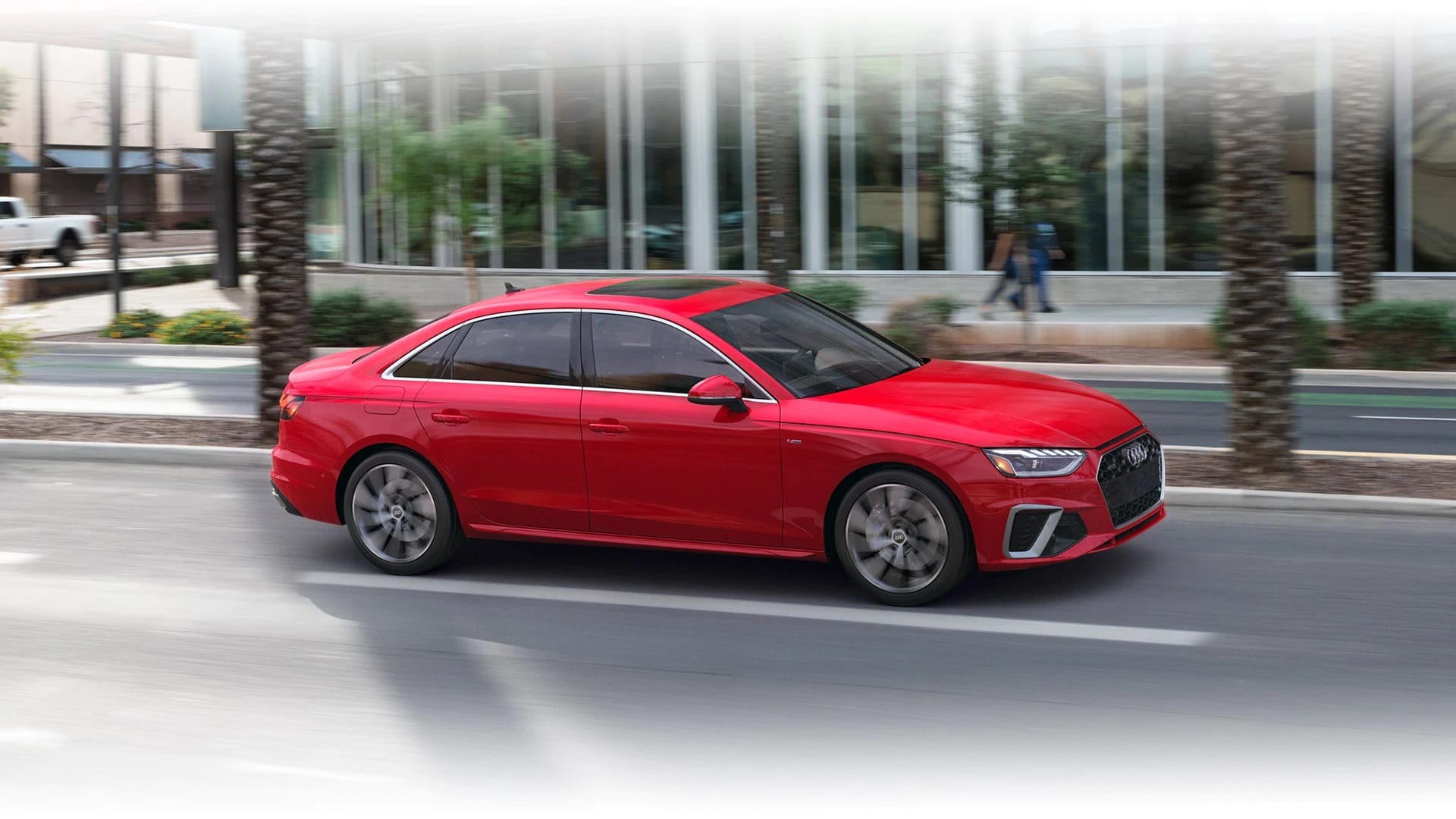 Audi likes to stylize itself as the better alternative to the other two big German luxury manufacturers, but with the A4 Sedan, it falls just shy of that goal. This is not, however, to say it’s a horrible car.

For 2021, Audi has taken its already well-loved 2.0L turbocharged inline-four and added a 12-volt hybrid system to it, at every trim level. This has boosted baseline power to 202 HP, and in the higher trims, to a meaty 261 HP. The hybrid operates much like BMW’s system, helping get the car off the line as well as picking up the slack between shifts with the 7-speed sports automatic.

Where the Audi loses points, however, is in moving some features that should be standard at $40,000 into packages. We find it almost appalling that one of the options on the list is that you have to spend $350 on top of the car’s price to get rear seat thoracic airbags… safety and safety systems should always be in the base price!

More agreeable is the convenience package, which for $1,800 or more, depending on sub-model, gives you remote start, blind spot sensors, rear cross-traffic emergency braking sensors, heated mirrors, at al. That’s more in line with what other manufacturers will put into such packages.

Redeeming the Audi a little more is that, like almost every Audi, it drives exceptionally well. The DNA that is passed down from Audi’s multiple racing teams is definitely showing, and not many cars will carve a corner as nicely.

Note: Regarding fuel economy, due to the addition of the hybrid system, the EPA nor Audi have yet released official MPG figures yet 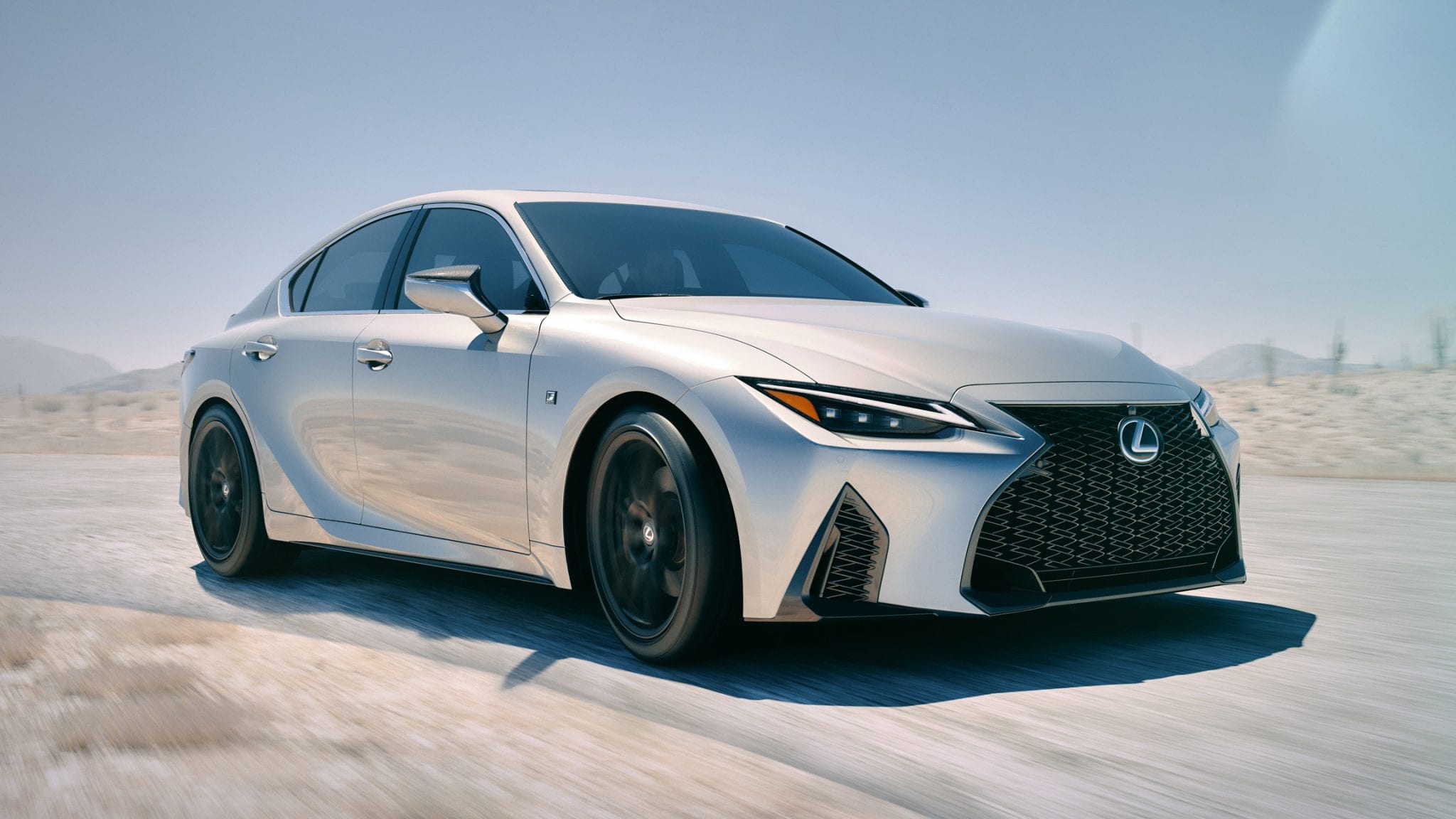 Much like its big brother the Lexus LS, the Lexus IS almost entirely about the interior. Whereas the LS is about bombarding you with every comfort and luxury option under the sun, the IS is all about focusing you on one thing: driving.

Inside the sharply styled and angular exterior, you will find a driver’s seat that is wrapped in leather and is comfortable but is also bolstered like a sports car seat. A wide center rest and stack provide you with all the information and setup options you need to personalize your drive. Rear seats are tight and small, but Lexus isn’t expecting you to have rear passengers. The instrument cluster is digital and based entirely on the LFA supercar cluster.

In the base IS300 or IS300 AWD, you get a grunty little turbo 2.0L inline-four that barks out 241 HP. If you go up to the IS350 F Sport, however, you get a howling 311 HP V6. Both are controlled via an 8-speed semi-automatic, and the IS350 F Sport also throws a Torsen limited-slip differential into the mix.

No matter what style you get, although the F Sport is what we recommend, the supercar DNA in the handling of the car immediately talks to your hands. You can place the nose precisely where you want to, you can turn the driving mode to sport plus and get the tail out a little if you want to… it’s just a fun car to drive. It’s just a shame that it’s flagged as a luxury car, because if it had been styled as a performance car, it would have fared much better.

Alas, as a luxury car, the cramped rear seats, small trunk, and dismissal of seemingly anything but the drive does drag it down to 5th place.

Just to make it clear, this part of the list does not include the Giulia Quadrifoglio, as that is a performance car through and through. This is just the “normal” Giulia.

Normal, however, is about as far away from what the Giulia looks like as any word. The Italians, through some deal made with some evil deity or via just pure emotion, style cars that make your heart beat faster just looking at them. The diving hood to the Alfa Romeo triangle grille, the subtle fender flares over all four wheels, the luxuriously long curves of the body lines… it’s just automotive art. Especially in Rosso Corsa (racing red).

Powering the Giulia is a technology powerhouse of a 2.0L aluminum turbocharged inline-four. 280 HP and 306 lbs-ft of torque come from this engine, and it’s little wonder as a small Italian company called Ferrari helped develop the power unit (and make the power unit for the Quadrifoglio!). Also, in typical Italian fashion, the engine sounds absolutely glorious as it spools up through the rev range.

Much like the Lexus IS, however, the Giulia loses points for trying to be more of a performance car in the luxury segment than an out and out luxury car. It’s also a typical Alfa, in that there is some silliness about it, such as the front doors being comically small, the rear seats being pretty much useless, and we don’t think that Alfa Romeo has heard of the words “trunk space.” If this were a list of the best performance luxury cars, the Alfa would be near the top… as it is, it’s got personality for days, but doesn’t quite cut it as a luxury sedan.