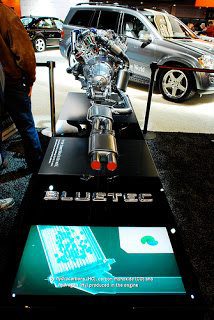 BMW, Honda, and Volkswagen are amongst the group of automakers bringing diesel back. Mercedes-Benz has rarely left the North American marketplace completely forsaken when it comes to the high-torque engine configuration, but it appears their latest (year 2007 ML320 CDI, GL320 CDI, and E320 Bluetec) suffer from a potentially faulty crankshaft sensor. Don’t let it taint your opinion of diesel and its future on this continent.

After all, this Recall tab will enlighten you as far as typical gasoline-burners break as well. For now, about 9,000 Benz diesel owners should soon be heading to their dealer.

Speaking of Mercedes, the beautiful CLS will be available as a CLS280 soon. Its 3.0L V6 produces 231 horsepower and a torque figure twenty down on that. McLaren Mercedes driver Lewis Hamilton, a rookie sensation and an almost-champion, has been signed to drive for the team for another five years.