One would assume that car thieves have a measure of pickiness or preference or a prediliction for the finer things. The Cadillac Escalade is known to be a favourite; likewise Honda’s Accord. However, car thieves also seem willing to take what they can get. And if in a few outings one comes across an easy-come-easy-go old Citroen, apparently one (if one is a car thief) jumps at the chance.

Somerset, England has seen proof of this lately. The thieves involved in the robberies are of the very risky, active sort. Breaking in or climbing in to the owner’s house, apprehending the car keys, and only then stealing the car requires extra nerve. The group (or individual) suspected in a string of such illegalities in Somerset is by no means a chooser. When the keys become available it requires little intelligence to see that the badge on the nose of the car matters not.
So, what is the Somerset thief stealing? On the high-end, an Audi A3 and an unspecified BMW. One Suzuki motorcycle, not likely of the slow variety. The mid-range is filled with a Ford Mondeo, Nissan Primera and Toyota RAV4. Up to this point, only the Primera jumps out as a bit of an odd choice, especially if it is an older model. The A3, BMW, and Mondeo are, without full knowledge of the specification, somewhat indirect competitors. Toyota’s baby SUV is joined on the practical front by a Ford Transit, suggesting that the thieves enjoy more than just automobiles. Check the cargo compartment for flat-screens, jewellery and wallets.
Citroen built some very fun iterations of the Saxo, and it could well be that the BBC isn’t sharing any info as to the nature of the beast (VTR, VTS?), but it is nevertheless striking that the Yeovil area of Somerset was robbed of an A3 and a Saxo. No Benz C-class around?
When thievery becomes the goal, check your taste at the door. 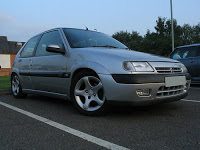