Do you mean to suggest that you refrain from staying up to speed on new model year changes? Five horsepower additions to Chevy trucks don’t change your life? Standard power mirrors on compact sedans don’t alter your behaviour?

Pause while I attend to my chest pain. Don’t worry, I think it’s just a broken heart; as I realize that we’re not all created with oil in our veins. Here’s an attempt to start you on a new path. Charter a new course in a brand new direction. You need ten facts to impress your co-workers, ten facts that will at least make them think you can advise them on their next automotive purchase. Begin memorizing…. now.

#10 – Land Rover still builds the Defender, but it isn’t sold in North America. The Defender 90’s 2.4L four-cylinder diesel produces 265 lb-ft of torque, achieves 28.3mpg on the Euro cycle, and propels the Defender to 60mph in 14.7 seconds.

#9 – BMW’s latest M3, which has a V8 producing exactly the same amount of horsepower as the V8 in Audi’s R8 (414bhp), sends 54 fewer grams of C02 into the atmosphere for every kilometre driven, as compared with the Audi. (295g/km by the BMW; same numbers as its torque figure.)

#5- Horsepower and torque graphs for the same engine, if placed one-on-top of the other, will always intersect at 5252rpm.

#4- If your Mercedes-Benz SL55 AMG wants to morph into a Fisker Tramonto, you’ll quite likely need to spend $140,000. Above the price of the original Benz.

#3- Those of us in North America see a Saturn Vue, while the Brits see a Vauxhall Antara. It’s four-cylinder diesel will achieve a 37.2mpg average on their economy cycle. So you’re looking at a 30mpg Antara and a Vue that won`t do better than 26mpg on the highway.

#2- Honda’s latest Accord, all decked out in luxurious trim and V6 equipped, weighs about 3,600 pounds. In 1997, a well-equipped Accord weighed 3,285 pounds. The V6 is now 49 cubic inches larger and 98 horsepower stronger. Fuel economy was 19/25 city and highway. These days, the more powerfula and heavier Accord is rated at 19/29. Interesting.

#1- If you could buy one, you’d find that a TVR Sagaris weighs about 100 pounds less than Mazda’s MX-5 Miata. But the TVR has 380 frieking horsepower, man. 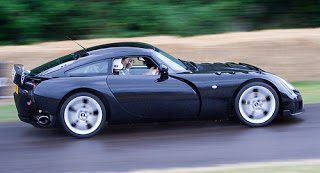