Thus far, two cars that hadn’t yet been displayed on these pages have garnered “good” ratings at the Paris auto show. Audi’s A1 Sportback and the Renault Megane Coupe are intriguing, handsome, and properly evolved transportation. (Click to read about the ugly and the weird, too.)

Now, for the bad. Although suitable for the ugly category that’s yet to come, Lexus’ IS250C fits in this space simply because Lexus should know better. Already, Toyota’s luxury brand has cancelled continuing production of the SC430 that The Good Car Guy placed in The Bad 8. A second convertible appears, this time of the hardtop variety, and it sucks. The current Lexus IS appears to be a sound starting point. But perhaps its lines don’t favour the removal of doors and the fitment of a large and heavy roof. In fact, the IS hardtop-convertible looks downright Chrysler Sebringesque from some angles.
Good gone ugly equals bad. The Lexus IS250C is bad, indeed.
Joining the Lexus is the Peugeot Prologue. There’s more to its label, but you don’t need to care. Worse than its grille is its description: a new kind of crossover. Will there ever be the same kind of crossover, the kind that one manufacturer releases; indentical in concept to its very direct competitor? The Lexus RX300 and Toyota RAV4 were new kinds of crossovers. We didn’t even call them crossovers back in the 90s. Now Peugeot is saying the Prologue HYmotion4 is “a new type of cross-over” and that Peugeot is “anticipating future trends”
Shut-up. Please. The Prologue may turn out all right; just don’t believe Peugeot’s hype. 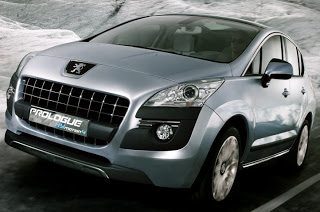