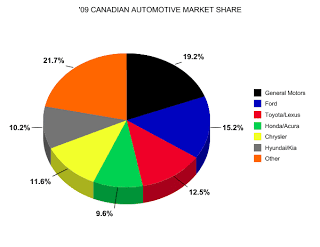 To all the unbelievers who want certain automakers to go it alone, have a look at this graph to see how the loners are coping in the Canadian automotive marketplace. Apart from the sixth largest conglomerates, many of whom are working together on multiple projects, only 21.7% of the market share is taken up by companies like Mitsubishi and Mazda. General Motors, Ford, and Toyota combine to make up almost half of all car & truck sales in Canada. That’s without including Subaru, something of a Toyota subsidiary.

You want to play with the big boys? Join’em. Toyota and Pontiac team up with the Matrix and Vibe. Take note of the mid-gate on the Honda Ridgeline and the V6 engines in older Saturn Vues. Transmission partnerships, engine collaboration, hybrid technology sharing….. the list goes on. That’s part of what made these six so powerful.