Few methods depress a community like filling windows with brown paper and adding “For Lease” signs to the doors. It’s discouraging enough when a downtown core is struck with music stores closing and restaurants giving up, but when huge parking lots sit empty and graffiti strikes the windows of large boxes in the middle of said parking lots, morale sinks to new lows.
Such is the case with car dealerships in the United States. For a mish-mash of facts and figures, check out the $$$ and Numbers below. The story isn’t happy – but it’s honest.
—– 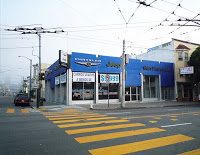 881 – total car dealerships in the USA that began 2008 with their doors open but closed by the end of the year, according to data firm Urban Science; making 2008 the worst year for dealership shutdowns on record
4.2 – percentage of all automobile dealrships in the United States to have shutdown in 2008, 80% of which were dealers of the Chrysler/Dodge/Jeep or Ford/Lincoln/Mercury or General Motors variety
2 – average number of car dealerships shutting down in the USA every day, according to the National Automobile Dealers Association
1000 – anticipated number of automobile dealership closures in 2009
20,084 – total car dealerships open today, not counting possible closures since the data was released, helped no doubt by the fact that Hawaii and a few other states didn’t lose any more dealerships then they gained in ’08

2,000,000 – annual tax revenue, measured in USD, brought in to the city of Gilroy, California by Don Malinoff’s Ford/Lincoln/Mercury and Pontiac/GMC dealerships that are now closed
3,000,000 – budget deficit, measured in USD, of the city of Gilroy, California before the closure of the two aforementioned dealerships which also resulted in job losses for 61 individuals
31 – percentage of total taxable sales earned on automobile selling in the city of Dublin, California in 2007 before dropping to 27% in the third quarter of last year before four Bay Area General Motors dealers abruptly closed up shop this year
640 – total Mazda North America dealers at this moment, down from 900 three years ago