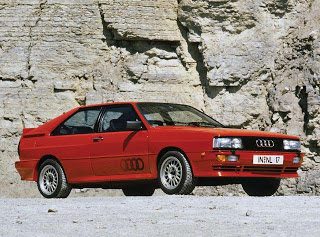 Only minutes after determining that posting a gallery of current Audi wagon images was a good idea, lo and behold, Audi has released a full rundown of its design process; themes; and raison d’etre. True, Audi’s information was geared towards different vehicles, but the German luxury manufacturer insists that these principles apply across the board.
Audi believes that their design is a clothing of its “technical superiority in sporty elegance”. Items such as the single-frame grille, the sweeping curve of the roof and the taillight design are all “pivotal elements” seen in every Audi. The company’s design studio in Munich is a modern space in a trendy neighbourhood, “a haven for open communication and unconventional ideas”.
Audi’s head of design, Stefan Sielaff, says it’s all about proportions. What designer suggests anything to the contrary? “It is the proportions, the sculptures of our automobiles which portray the interplay of technology and design.”

Wolfgang Egger, another member of the Audi design executive, describes the differences in the ostentatious grille. “The cars in our A family, from the A3 to the A8, exhibit a single-frame grille which is classically wide. As for the models in the Q series, the Audi Q5 and Audi Q7, the single-frame grille appears considerably higher. And on sports cars such as the R8 and the TT, it is particularly flat in execution and takes up a position low in the face.”

Audi says the wavy outline of the headlight underside on the A4 leaves a lively impression. The Q5’s hood line, which cuts just slightly from above into the headlight edge, is invigorating. Audi’s use of LEDs as daytime running lights “express bold determination when they traverse, as an arc, the bottom edge of the headlights.” Ah, but, “If, however, the diodes are – as on the Audi Q5 – closer to the upper edge, then they result in a more relaxed look.”

Air inlets are another part of what makes an Audi face an….. Audi face. “Parallelograms seem more authoritarian than trapezoids. Furthermore, a prominently three-dimensional and sharp-edged rendition of the air inlets’ edges and of the front spoiler intensifies sportiness.” Apparently, three-dimensionality “gives the face character and symbolizes the power of the engine.”
You probably didn’t bother counting, but the side of every current Audi has two light-refracting edges. “The upper edge is the pronounced shoulder, which comes into sharp focus in the tornado line.” Meanwhile the dynamic line beneath “rises toward the vehicle’s tail end, contrary to the tornado line may go upward (A3), sweep (A5), or be calmly strung horizontally as on the A4 Avant.
Audi believes the body should comprise two-thirds of the height of the vehicle, with the glass area comprising the remainder.

Moving to the rear, Audi makes use of horizontal lines to emphasize width. Generally, a concave surface underneath the taillights enhances this effect. Inside, Audi wants to echo the lines of the exterior with a low-slung cockpit that accentuates horizontal lines. Whether or not you analyze why (or perhaps why not) an Audi looks good each time the four-rings make an appearance, all the reasons above contribute to your opinion. Whether you knew it, know it, or believe it.