Around the corner from GCBC Towers, a brand new 2011 Audi A4 Avant has been enjoying frequent washes at the hands of a caring owner. The Good Car Guy has never hidden his attraction to Audis, particularly the current B8 generation of Audi’s A4 wagon. In The Good 12 v2.0, the Audi A4 Avant was Part I. But even beyond this, the 2011 A4 Avant parked nearby is especially stunning.

Apparently unavailable on the A4 Avant in the UK and the USA is a colour Audi calls Teak Brown Metallic. But my A4 Avant the A4 Avant parked around the corner is painted in this lovely, shiny, shimmering purplish-brownish-blackish, unlike anything I had seen before the shockingly wicked 2011 Audi R8 Spyder.

2011 Audi A4 Avants start at $42,800 in Canada and are equipped with Quattro all-wheel drive as standard and a 211 horsepower 2.0 TFSI 4-cylinder. Average fuel economy, according to Natural Resources Canada, is 8.7 L/100km. The 18-inch five-arm wheels are the pick of the crop. 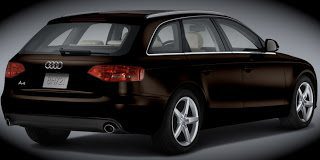