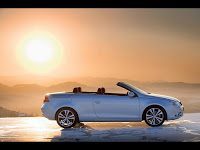 First things first. Two nights ago I was about to turn left onto the best on-ramp in the city when I noticed a new convertible in my rear-view mirror. (It wasn’t actually in my mirror, eh, it was just a reflection.) Get it? So I tell the Good Car Girl that at the top of the on-ramp a nice little cabrio was going to cruise on by.

White is the new… black, and this white Volkswagen Eos would please the Good Car Girl with her lifelong love of VW’s. The Eos may be a touch soft, but it does look pretty nice and has a couple great engines.

I told her the Eos was likely being driven by a lady who would want to show us her impatience after being held up on the on-ramp. It is a GREAT on-ramp, and the urge to tramp it is hard to resist. I resisted, and she waited until the top.

Where, the lady in the Eos merged behind me, and then signaled for the next lane and flew on by. That 2.0L turbo doesn’t have crazy stats, but there’s no denying serious mid-range punch. Complaints? Acknowledging that winds shall buffet thee, why must the windows of every stinkin’ convertible with its roof down (rare, see below) be up? The wind deflectors that manufacturers offer today are fine, a nicely amalgamated part of the design. But the windows up… ugh. It’s gross. Notice the windows-down consistency in promotional shots. I was trying to impress the Veedub advocate behind me with one of her Veedubs. Not being a convertible lover, the end impression wasn’t all that great considering that the windows-up posotion made the 29-year oldish female inside the Eos looked 79-years old.

Worse still was the Thunderbird I saw on the warmest day of the year up to this point. With high temperatures forecast for 28ºC, bright beaming sunshine, a black Thunderbird went moseying on through a 4-way stop in front of me with its black soft-top up.

Sure, he was going to a business meeting and he couldn’t get his hair mussed. Tell me when exactly you want your hair tangled? Try….. never. Ever notice that certain convertibles are prone to having their tops dropped? 80’s VW Cabriolet? The tops go down when the temperatures rise over 5º. BMW 3-series cabrios? Tops only drop on roads that lead to beaches or in southern portions of Florida and California where you have to show the neighbours your sprayed-on tan.

Lessons learned? Say yes. When, not if, you drop the top on your convertible, drop the windows as well……

Hyundai has a good-looking little wagon-ette with no plans to bring the car to North America. Pout. ‘German-designed Hyundai’ has a nice ring to it…..

They tell me now that my Ferrari 599 GTB Fiorano is two years from delivery. Pout again. I can’t get the Hyundai I want and now I have to wait for my Fezza? It’s a rough life. No, seriously – wait times for Ferrari and some other exoto-luxo-prestige cars are lengthening as demand from China and Russia joins the burgeoning Middle-Eastern markets. China will buy at least 150 Ferraris this year; Russia took 60 last year, thereby prolonging my wait…..

Karl Lagerfeld’s photography of the new Audi R8 will be displayed in New York City starting next week. Then the pics will be seen in a calendar called the “Kaleidoscope Vision of a Car”. Problem? That calendar of this oh-so-nice Audi is only available to R8 buyers. I took the Ferrari – which I’m still waiting for – over the R8 and now I discover I forfeit the calendar too. On a more interesting note, have you ever realized that as photographers and like-minded artistic people become famous, their pictures of something often have them in it taking a picture of the true object? The preview pictures of the R8 are great, but Lagerfeld is in one of the shots, taking a shot of the R8? Well whose really behind the lens? Didn’t R8 buyers pay all this money to get the car and pictures by Lagerfeld? “I didn’t pay for the assistant’s photography”…….

The original Gordon Murray-designed Light Car Company Rocket will be reproduced. At a price of $99,500 USD. The car weighs less than 1000 pounds, seats two tandem-style, and rockets past just about anything. But they’ll just make 10 per year, which likely lengthens the waiting list. Pout. Gordon Murray designed the McLaren F1 and I missed out on that, too….. 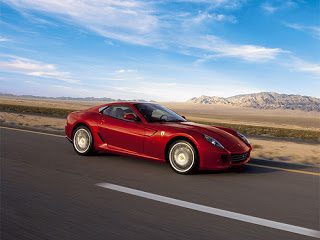