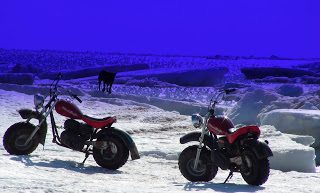 Stereotypes never last long when you actually spend time in the place or with the people. Not all automotive writers thrive on top speed tests and not all Prince Edward Island fields are meant for potatoes.

Both of these generalizations were put to the test in late March, and both failed. I drove nigh unto 800km in a 2006 Nissan Sentra. The Sentra, according to Energuide, would use 8.4L/100km in the city and 6.3 on the highway.

Our driving involved lots of both. We used 7.3 litres every time we drove 100km, which splits the fuel economy ratings right down the middle. Clearly, achieving the ideal circumstance fuel economy ratings of Energuide or the EPA requires the avoidance of high-speed driving. That high-speed driving which is done in fast, expensive cars of which we are accused. In addition to this, we likely emitted 144 kilograms of carbon dioxide. Achieving the ‘unachievable’ Energuide ratings gave us our number one proof of environmental friendliness.

Day two of the trip took five of us from Summerside to the far western end of PEI. The first points of interest were on Routes 12 and 163 near Tyne Valley. It seemed to my exaggerating memory that there were countless houses using solar power. House after house; home to subsequent home, solar panels of differing sizes and quantity. PEI may not be populous, and it may seem rural, but it is the most densely populated province. Driving down a country road, clueless as to our location, I was surprised to see solar-panelled houses – many of them – when the expectation is for pesticide and run-off problems in the rivers.

www.lennoxisland.com/liae offers plenty of information about ecotourism near Malpeque Bay. So says the site: “Lennox Island Aboriginal Ecotourism (LIAE), established in 1999, exists to develop and support tourism on Lennox Island First Nation in a manner that is responsible to the local environment and culture. LIAE manages several facilities that attract visitors from around the world to learn about Mi’kmaq culture in its natural setting.”

Great facilities are present and accounted for, but it is the ability to showcase what PEI has to offer that makes the Lennox Island First Nation’s effort special. With only a few hundred people and 1328 acres, the island has the untouched space necessary to provide truly ecological means of tourism. The infrastructure’s impact is low, the activities are affordable, and the area is conserved properly. Route 163 and all the little backroads around it offer great lowland views of the north shore of Prince Edward Island.

The final destination to showcase eco-friendliness came at North Cape. The Wind Energy Institute of Canada is headquartered here, north of 47º. This large peninsula offers 300 degrees of exposure to the Gulf of St. Lawrence, says www.awts.pe.ca, as well as class 1 winds and very cold temperatures. Ice flows take up a large chunk of the shore at the northern tip of PEI in late March, and the ice was plenty thick enough in most places for a trek way out to sea.

Small though the province may be, it was a drive and a half from the central part of the Island to the northwest. However, the sight of many, massive, white towers rising before your eyes is something to behold. Their eery whir is eery enough to ask the tour bus drivers to turn off the diesels. PEI expects all its electricity will be wind-generated by 2015. Our 144kg of emissions didn’t feel so good, but watching as power generates gave me a good enough feeling of neutrality.