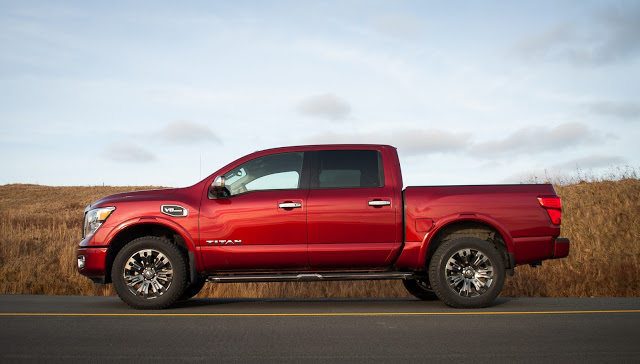 At $67,595, the 2017 Nissan Titan Platinum Reserve is not the most expensive new pickup truck we’ve ever tested.

After consuming 18.5 litres of fuel for every 100 kilometres of driving, it wasn’t the most inefficient pickup truck we’ve ever tested, either.

It was the second least efficient pickup truck we’ve ever tested.

This truck didn’t consume that heavily.

And that would have been a fair point in 2003, the last time Nissan introduced an all-new Titan.

The Titan’s combined fuel economy rating has likewise risen. But the 13.4 L/100km Natural Resources Canada rating bears no resemblance to the 18.5 L/100km rating we achieved. Perhaps it was an anomaly, an aberration caused by a number of short drives in cold weather and some snow-covered roads?

Pehaps not. Before we spent a week with the 2017 Nissan Titan, CarDriven’s Kevin Harrison suffered an 18.8 L/100km result.

Fuel economy matters, even when fuel isn’t at its most expensive, even among pickup trucks that are presumed guilty before proven innocent. Over the course of a 20,000- kilometre year, that F-150 Platinum would require $3036 in fuel; the Titan $4255, or $23 more per week.

The first-generation Nissan Titan followed the first Toyota Tundra, a successor to the too-small T100, by four years. Built in Mississippi, the Titan was largely ignored by the North American truck-buying public.

Rumours suggesting the second-generation Titan would eventually become a twin of the Ram 1500 were eventually put to bed, and many years too late, Nissan finally introduced a semi-heavy-duty Titan, the XD, for the 2016 model year. This regular-duty 2017 Nissan Titan followed, a second-generation truck that will surely be Nissan’s last unless significant inroads are made.

There are no options available on the Platinum Reserve, only accessories. To the SV, the SL adds automatic collision notification, 20-inch wheels, and leather seating, among other items.

Compared with the crew cab, short bed variant of the segment leader, Ford’s F-150, the 2017 Titan is 3.4 inches shorter, bumper to bumper, but nearly an inch wider. Though it depends on trim levels and wheels, this Titan Platinum Reserve stands ever so slightly taller than the F-150 4×4 Platinum we tested in late 2015. The wheelbase of this truck, however, is 5.2 inches shorter than the Ford’s.

Relative to its own truck family, the Titan Crew Cab is 9.1 inches longer than Nissan’s longest Frontier, 7.9 inches wider, and 7.1 inches taller. 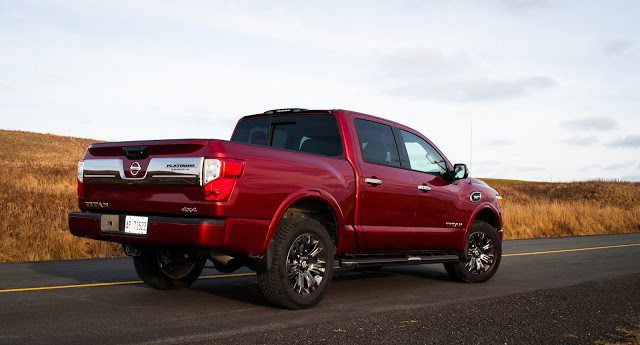 DOES IT WORK?
Undeniably, the 2017 Nissan Titan is quick, capable, and comfortable. Yet there is a sense, a strong sense in some areas, that Nissan replaced its 13-year-old first-generation truck design, the 2004 Nissan Titan, with a 2017 model that would have been entirely current in 2013.

The Titan’s otherwise quiet cabin is forever interrupted by the sound of the rumbling 5.6L V8. Sounds fun? At first, yeah. But eventually, you just want the Titan to be as quiet as the Ram, Silverado, Sierra, and F-150.

Meanwhile, when it comes to that V8, one must always be concerned that dipping into the power will cause fuel consumption to skyrocket even higher. Fortunately, the powertrain is smooth. The 7-speed never flubs a shift, selecting 4Hi goes off without a hitch, and power is accessible across the rev range.

‘;
document.getElementById(“vinads_div”).innerHTML = lfAd;
}
});
Less smooth are the Titan’s on-road mannerisms. With 20-inch wheels, the ride becomes busy on uneven pavement. With excessively weighty steering and a burdensome curb weight, handling is predictably ponderous with no hint of nimbleness. Pushing the Titan harder doesn’t cause the truck to shrink around you, as so many modern large vehicles do. Instead, the up and down suspension movements simply become more exaggerated.

The 2017 Nissan Titan Platinum Reserve drives like a pickup truck in a world where, increasingly, other pickup trucks do not.

Maybe that’s not so bad. Maybe you want a pickup truck to feel like a truck. You wouldn’t be the first. 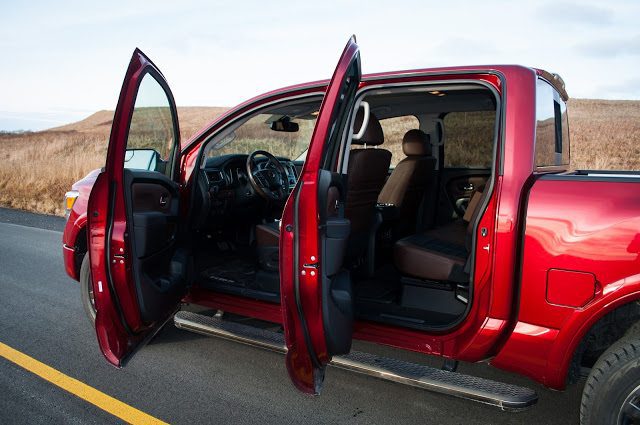 The Titan won’t shortchange you when it comes to the crew cab’s interior dimensions. Rear seat space is abundant – three adults will be happy to accept the accommodations. Up front, visibility could be better. The height of the dash, dip of the roof, and rise of the beltline hinders the outward view somewhat.

There’s still no denying the commanding view of the road and the commanding atmosphere of a truck that steers and handles and rides and sounds like a truck.

Other complaints and compliments: the small touchscreen is a very long reach from the superb driver’s seat, and Nissan’s infotainment unit doesn’t hold a candle to Ram’s UConnect. With no sunroof, let alone panoramic glass, the Platinum Reserve doesn’t quite feel sufficiently platinumy.

Nissan isn’t embarrassed to install a traditional column shifter, thankfully freeing up space on the console for more storage. Nissan also wisely integrates a thoughtful bed management system and allows your previous drive’s seat heating/cooling selection to remain as is. 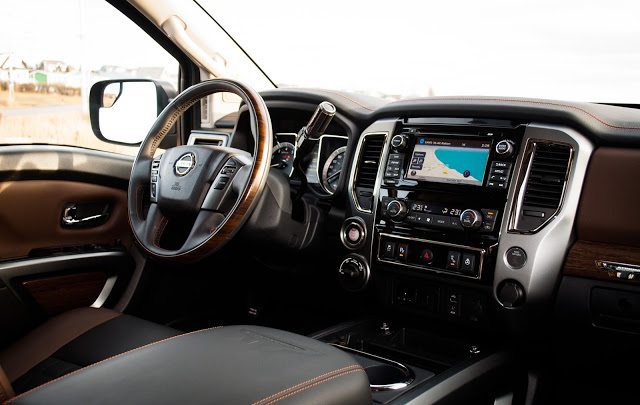 IS ANYONE BUYING IT?
Sales are picking up, but relatively speaking, the Titan is an oft-rejected, oft-ignored pickup truck. With the regular-duty, non-XD Titan more readily available at the end of the year, fourth-quarter Titan volume in Canada jumped 61% to 1023 units. But keep in mind, Ford was selling 2500 F-Series pickups every week in December.

South of the border, U.S. Titan volume nearly quadrupled to 13,390 units in the final third of 2016. December sales, at 4396 units, even surged 32% past November’s total. But again, even in December, the Nissan Titan owned just 2% of America’s full-size pickup truck market.

SHOULD I BUY SOMETHING ELSE INSTEAD?
You almost certainly will.

42% of all Canadian full-size pickup truck buyers choose a Ford F-Series; another 54% choose a Ram, Sierra, or Silverado. In 2016, four times more buyers chose a Toyota Tundra than a Nissan Titan.

HOW MUCH SHOULD I PAY?
Nissan doesn’t offer the hugely broad pickup truck lineups witnessed at Ford, General Motors, and Ram, but that does not mean one size fits all. A Titan SV Crew Cab 4×4 with the massive $7650 Premium Package (proximity access, power rear window, power driver’s seat, blind spot monitoring, and more) kicks the price up to $49,945.

But that’s currently discounted by $9500 for cash customers, $6500 for lease customers, and $2500 for finance customers. 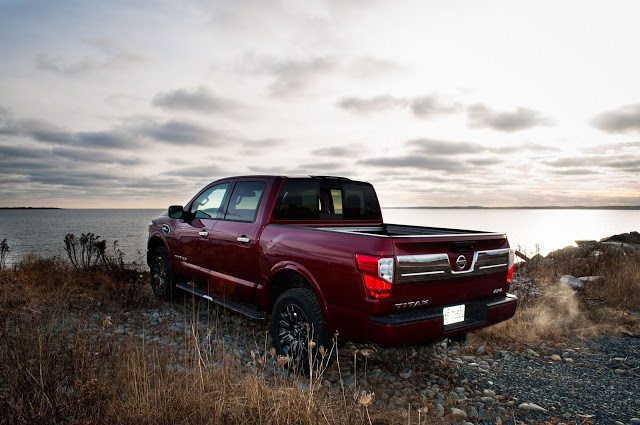 WHAT’S THE VERDICT?
Nissan’s in a bind. The first Titan caught the attention of truck buyers because it was a new idea. But by the end of its tenure, the Titan was not sufficiently capable or amenable, it was well off the fuel efficiency pace, and already dominant pickup trucks were leaping forward and grabbing even greater market share.

As a result, Nissan needs the second-generation Titan to be distinctly superior to the established nameplates just to get attention. Merely matching the F-150 and Silverado and Ram in terms of towing capacity, payload, acceleration, interior volume, features, and driveability won’t be enough.

Indeed, it isn’t enough. Three years ago, maybe five? The Titan’s V8 powerhouse, quiet and luxury-lined cabin, 1610-pound payload, and 9390-pound towing capacity would have impressed in a former day, but the top-tier competitors now do more. F-150s can tow up to 12,000 pounds, accept payloads twice as heavy as the Titan’s, accelerate even more swiftly, and bathe occupants in even more luxury and refinement and technology, all while steering more accurately, handling more adroitly, and riding more comfortably.

The entire pickup truck segment is rapidly improving, and it’s only that rapid rate of improvement that highlights the 2017 Nissan Titan’s shortcomings. Outside of comparisons and back-to-back drives, the new Titan will definitely impress. It is, to be fair, entirely competitive, but not at a price point that lines the Nissan up directly against its Detroit competitors.

The Titan is by no means bad. Its rivals are just too good.

Timothy Cain is the founder of GoodCarBadCar.net, which obsesses over the free and frequent publication of U.S. and Canadian auto sales figures. Follow on Twitter @goodcarbadcar and on Facebook. The Titan was supplied by Nissan Canada’s press office.