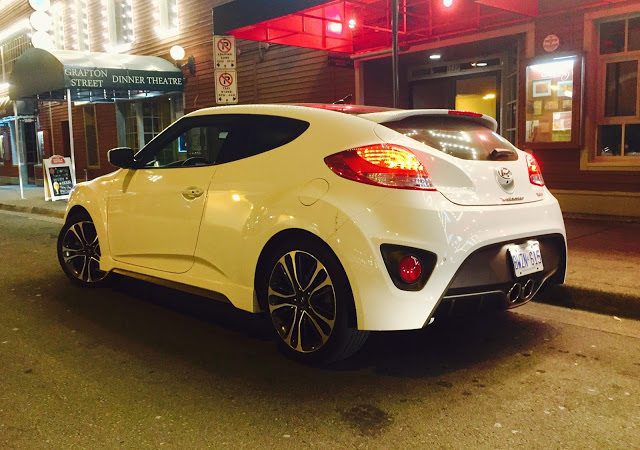 The 2016 Hyundai Veloster isn’t supposed to be as spacious as its sibling, the Hyundai Elantra, Canada’s second-best-selling car.

It’s not supposed to be as affordable as its Hyundai Accent sibling, Canada’s top-selling subcompact car.

It’s not supposed to fall into line with mainstream vehicles such as the Hyundai Tucson, one of Canada’s fastest-growing crossovers.

The Hyundai Veloster — now as it was five years ago, even when turbocharged for 46% more horsepower — is not the small car for everyone. The Veloster Turbo exists precisely for the small car buyer who doesn’t want the car everybody else is already driving.

Is such an attempt to cater to a niche audience license for lowered expectations? Over the course of the last five years, the small car game has moved on; affordable performance cars have raised the bar.

The Veloster continues as is, but its failure to meet revised standards likely won’t matter to, the hot warm hatch buyer who wants a Veloster precisely because he’s surrounded by a Canadian passenger car fleet overrun with uniformity.

WHAT IS IT?
Previewed by the HND-3 Concept of 2007, the Hyundai Veloster arrived in North America in production form in the second-half of 2011. But the first Veloster, while looking like a genuine pocket rocket, was powered by the Hyundai Accent’s modest 1.6L four-cylinder producing only 138 horsepower. The fifth-generation Elantra, now departed, was called upon to serve as the Veloster’s foundation. When we tested a silver Veloster in late 2011, we celebrated its on-road presence but bemoaned its on-road behaviour. 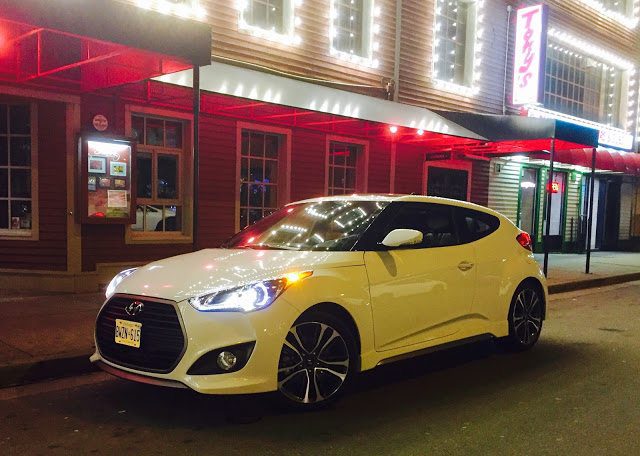 A year later, the Veloster was made available with a turbocharged 1.6L four-cylinder. As tested here, the Veloster Turbo produces an additional 63 horsepower and 72 extra lb-ft of torque. In Canada, the least costly Veloster Turbo is $8600 more costly than the basic naturally aspirated Veloster and $1550 more than the most luxuriously equipped Veloster.

The dual-clutch transmission of our Hyundai Canada-supplied Veloster Turbo adds $1500 to the $28,994 Veloster Turbo base price and comes equipped with niceties such as a heated steering wheel, proximity access, leather seating, and a panoramic sunroof that gives rear occupants in particular the a big sky, all-glass view. Want to spend more on a Veloster? Add $1000 for matte paint.

HOW BIG IS IT?
Small on the outside, small on the inside. Compare it with a car you know well and a potential competitor for perspective. The Hyundai Elantra, already mentioned one of Canada’s most popular cars, is 13.8 inches longer, but only slightly wider and taller.

The Ford Fiesta ST, on the other hand, is half a foot shorter, bumper to bumper, and nearly three inches narrower and two inches taller.

But with its sloping roof, rear seat headroom is nearly nonexistent in the Veloster. Access to the back is obviously awkward via the driver’s long door, but the funky third door is awfully tiny if you’re keen on getting kids into and out of car seats. There’s an impressive amount of cargo volume, however, the only demerit being the high sill over which luggage and groceries must be lifted.

DOES IT WORK?
In a purely objective sense? Goodness no.

The Veloster’s ride quality is abysmal. Few, if any, of the cars I’ve driven over the last few years have exhibited so much stiffness and busyness; perhaps no new car I’ve tested in the last few years has traversed roads in such a brittle fashion. The structure seems to lack the requisite stiffness. Yet Hyundai attempts to clarify the car’s so-called sportiness by stiffening the suspension, leading to all manner of disagreements between the car and the road underneath. Bounced and jostled by bumps mid-corner, the Veloster Turbo driver can’t engage the car’s full power with any measure of comfort. Ever.

But that’s not the end of the car’s letdowns. The dual-clutch transmission, sometimes referred to as a direct-shift gearbox by other automakers, is intended to shift with terrific speed and smoothness, preparing the engagement of second when you’re accelerating in first; readying a shift into third when you’re decelerating in fourth. Yet the Veloster Turbo’s two-pedal DCT slurs shifts like a comfort-oriented full-size sedan’s lazy automatic. Response from rest manifests transmission lag mixed with turbo lag, creating a sense in which the upgraded Veloster feels decidedly slow rather than particularly quick. Even shifting yourself via the paddles does not lend swiftness to the transmission’s proceedings.

That doesn’t mean the 1.6L turbo can’t come into its own at speed. When overtaking on a rural two-lane, the realization that you’re running out of time before an oncoming car approaches is met with impressive response. In-gear response, that is, the kind of response that didn’t require the Veloster to downshift, but rather to call upon its plentiful torque.

On most occasions, however, the Veloster Turbo is full of the disadvantages linked to sportiness at all levels, and those disadvantages don’t have corresponding advantages. The stiff and brittle suspension does not coincide with flat-as-a-pancake cornering. The hefty steering isn’t matched to feel and feedback. (Indeed, the steering detests leaving centre and isn’t keen on returning to centre, either.) The 1.6L’s abundant torque is married to a transmission that doesn’t want to take advantage of the engine’s surplus. The Veloster Turbo says, “I’m quick and hot and sporty,” but it doesn’t walk the talk. In reality, the Veloster Turbo is merely brisk, warm, and spry.

The seats are great. The interior layout is straightforward and of sufficient quality. The load of equipment would embarrass a basic Volkswagen Golf GTI. And the price that accompanies the comfort, simplicity, features, power, and sporting image is more than acceptable at the steep discounts Hyundai Canada is currently offering.

So imagine how enticing the Veloster Turbo would be if Hyundai infused the transmission with the manners of a performance car, tuned the steering to be less addicted to centre, and permitted the Veloster to roam rough roads without bruising kidnes and dislodging fillings? The whole idea of the Hyundai Veloster Turbo is desirable. The execution leaves something to be desired.

‘;
document.getElementById(“vinads_div”).innerHTML = lfAd;
}
});
IS ANYONE BUYING IT?
Not unexpectedly for vehicles competing in this style-centric category, Veloster sales tailed off after launching five years ago. In Canada, after peaking at 5741 units in its first full year of 2012, sales were nearly chopped in half by 2015 and are down a further 40% this year.

Yet in the United States, a much larger and more consequential market, Veloster volume proved much more stable. 2012 was the Veloster’s best year there, as well, with 34,862 sales. But the drop-off to 2015 was a much more reasonable 30%. Meanwhile, sales in 2016 are improving once again, and Hyundai could see sales rise to a three-year high by year’s end.

Overall, the Veloster is currently America’s 59th-best-selling car. It ranks 67th in Canada. 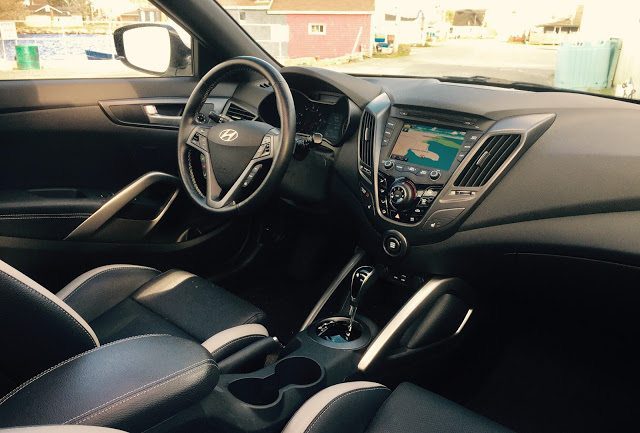 SHOULD I BUY SOMETHING ELSE INSTEAD?
There’s no shortage of options for the performance car buyer around the $30K price point. We would heartily suggest a look at the Ford Fiesta ST. If there’s a remaining 2016 three-door Volkswagen Golf GTI on your dealer’s lot, a good negotiator may get the price under $30,000.

A particularly pragmatic Veloster buyer could perhaps be tempted by a high-spec Mazda 3 Sport GT. The Veloster’s engine will be found under the hood of the funky Kia Soul in 2017. You may want to take a look at a Mini Cooper or Fiat 500 Abarth, as well.

HOW MUCH SHOULD I PAY?
There’s no denying that the turbocharged engine is a superb addition to the Veloster range – it’s the car the Veloster should have been all along. But there’s no need to accept the crimes against transmissions committed by Hyundai’s two-pedal DCT, so save your money.

With 0% financing, no money down, and payments made over five years, a Canadian’s taxes-in monthly payment should fall comfortably under $500.

WHAT’S THE VERDICT?
Five years into its tenure, the Hyundai Veloster, even in Turbo edition, is not the best performance hatch for the money. Dynamically inferior and uncomfortably inflexible, the 2016 Veloster Turbo doesn’t stack up well against cars such as the less costly Ford Fiesta ST and more costly Volkswagen Golf GTI.

But the Fiesta ST, if we’re honest, is just a Fiesta. The Golf GTI is, to be frank, just a Golf. A tremendous Fiesta, to be sure, and an amplified version of an already great Golf, no doubt.

The Veloster is another breed altogether. Though closely linked to its Hyundai/Kia small car brethren under the skin, the Veloster is different from the standard small car fray in myriad ways. As a result, it’s certainly not boring.

Timothy Cain is the founder of GoodCarBadCar.net, which obsesses over the free and frequent publication of U.S. and Canadian auto sales figures. Follow on Twitter @goodcarbadcar and on Facebook. The Veloster Turbo was supplied by Hyundai Canada’s press office.