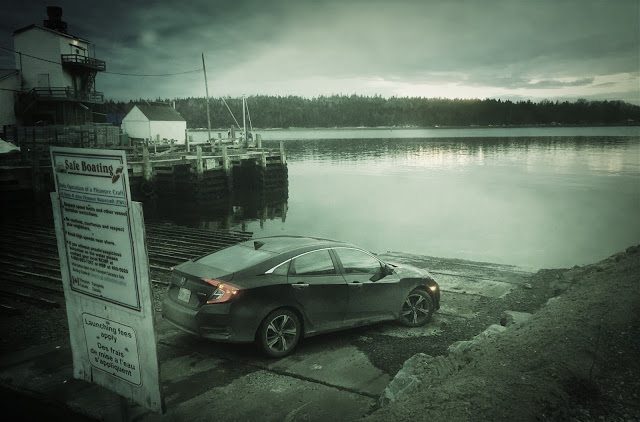 The ninth-generation Civic of 2012-2015 was accepted, if not widely praised by critics and consumers, and was not reflective of Honda’s best efforts.

Yet even without critical accolades or the fiercely passionate following once engendered by Civics of yore, Honda’s ninth-generation Civic was a very successful car. This wasn’t purely because of the nameplate’s sterling reputation for reliability, longevity, and value, although such factors no doubt benefited the outgoing Civic. Rather, the ninth-generation Honda Civic added to its reputation by, well, not being a bad car. Did it move the game on from the stylish eighth-gen Civic? Not really.

But combining the assumption of consumers across Canada – that a Civic is invariably a solid and dependable and efficient machine – with the realization that the ninth-gen car didn’t do anything in particular to offend, resulted in impressive results. Civic sales in the United States rose to a five-year high in 2013; Canadian sales rose to a six-year high in 2014. The Civic outsold all compact cars in the U.S. in 2012 and 2013 and ended 2015 as Canada’s best-selling car for an 18th consecutive year.

Now Honda’s done with the ninth-generation car, and it’s abundantly clear that the tenth version of Honda’s venerable Civic sedan is all new.

WHAT IS IT?
Honda Canada began selling Civics in 1973. Not this Civic, exactly, but the first Civic. This Civic is the tenth version of Honda’s long-running small car nameplate. Honda has already shown the coupe version of the tenth-generation car. There will be warm Si versions, even a hot Type R, and a 5-door hatchback to take on the Hyundai Elantra GT, Mazda 3 5-Door, Kia Forte5, Ford Focus hatchback, Volkswagen Golf, Subaru Impreza, Scion iM, and an upcoming Chevrolet Cruze hatchback. 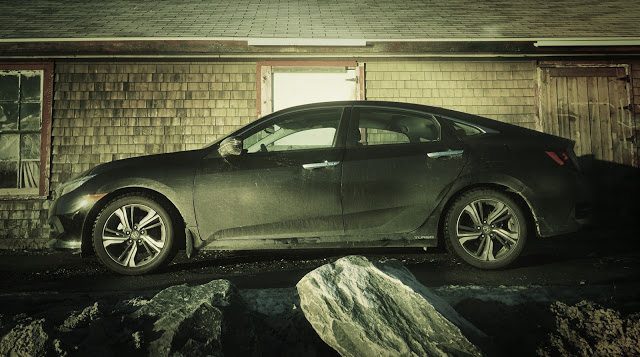 That hatchback variant is worthy of note because many look at this Civic sedan and see a car they think may in fact be a hatchback itself. It’s not.

We rarely discuss styling in GCBC reviews – you can see the images, you’ll see Civics drive by, you can make up your subjective mind without commentary. We will, in this case, point out that the Civic is hugely angle-sensitive, scarcely looking from some viewpoints as though it could be the same car as the one you scanned from a different angle just moments ago.

Our test specimen is a top-trim 2016 Civic Touring, one of two trims sold with Honda’s new 1.5L turbocharged four-cylinder powerplant, the first turbo Honda has ever installed in a Honda brand product. (Acura’s first-generation RDX utilized a 2.3L turbo four-cylinder.) The Civic DX, LX, and EX all make do with a 2.0L generating 158 horsepower, enough to make the new base Civic more powerful than any non-Si/Type R Civic in history if not for the new 1.5T.

For the time being, turbocharged Civics are all paired with a continuously variable transmission. The $28,685 Civic Touring costs 63% more than a basic 2016 Civic DX.

HOW BIG IS IT?
Bigger now than it was. Bumper to bumper, the 2016, tenth-generation Civic is three inches longer than the 2015, ninth-generation Civic. It’s also nearly an inch wider, but it’s almost an inch lower, and the new car’s wheelbase is slightly more than an inch longer.

There are payoffs, of course. Cargo volume grew 18%, Honda says, passenger volume grew 3%, and rear legroom improved by more than an inch. Noteworthy is the narrow trunklid opening and the slope of the roof which will likely cause you to smash your two-year-old’s head when loading him into his child seat. Oops.

Compared with the Toyota Corolla, the only small car which sold more often than the Civic in the U.S. and Canada in 2015, the 2016 Civic isn’t quite as lengthy but is slightly wider and a couple inches lower. The Corolla tops out at 132 horsepower and weighs as much as 2865 pounds in premium S trim, or 21.7 pounds per pony. This far more powerful Civic is a bit heavier but must tote only 17 pounds per horsepower. Toyota claims greater passenger volume; Honda claims the larger trunk.

DOES IT WORK?
Living with the new Civic for a week was a pleasant exercise, not least because the Civic we were driving was a very nicely equipped compact car. Civic rivals appear at GCBC Towers frequently, but they’ve never before been fitted with Lane Keep Assist, which genuinely steers the Civic in ideal circumstances. Or adaptive cruise control. Or pre-collision braking.

For nearly $29,000, you get a lot of Civic, not only in terms of safety equipment or features (sunroof, dual-zone climate control, power front seats, navigation, Apple CarPlay, keyless access) but in occupant space, as well. Unfortunately, the very roomy back seat is encroached upon by a taller centre hump, limiting the 2016 Civic’s five-passenger comfort.

The 1.5L turbocharged inline-four never ceased to impress. Slightly grumbly just off idle, the 1.5 revved happily and is more than swift enough to be deemed a quick car. Leave the Econ mode off if you want to think the Civic 1.5T is quick, however, and consider sliding the gear lever past D into S. The engine then becomes far more responsive to throttle inputs and creates a far livelier experience.

We split our 260 kilometres in the Civic between Econ on and Econ off and allowed the continuously variable transmission to work more enthusiastically in Sport as often as Drive. The resulting 8.2 L/100km is far from impressive particularly given the milder-than-normal winter temperatures. Most days were above freezing. In March 2014, a 1.8L-powered Civic EX coupe managed 6.1 L/100km in our hands.

Small turbocharged engines have disappointed us in the past, most apparently with the Kia Optima Turbo and Ford Fusion EcoBoost. The 1.4L turbo in the Volkswagen Jetta, on the other hand, is both sweeter in action than this Honda mill and more efficient in our testing.

One thing’s for sure, the CVT is not an impediment. I don’t love CVTs; I’d rather Honda use a conventional automatic or already be offering a 6-speed manual; I’m not convinced that the 1.5L turbo’s potential for maximum thrills can be explored because of this transmission pairing. But painting all CVTs with the same brush is a big mistake. Most buyers won’t notice the difference between this CVT and a conventional automatic, it far more capably simulates traditional revving than most CVTs, and it doesn’t cause the 1.5L turbo to endlessly drone.

If the CVT is competent but anti-enthusiast in nature, the 2016 Civic’s ride and handling balance place the Civic nearer to the top of the class dynamically. Essentially, compact cars fall into one of two camps: the driver pleasers and the more appliance-oriented. In the former group are cars such as the Volkswagen Golf, Mazda 3, and Ford Focus. Then, in a second group, are cars such as the Toyota Corolla, Nissan Sentra, and Hyundai Elantra which stress comfort and place less emphasis on, for instance, turn-in sharpness.

The Civic falls squarely in the middle, happily and wisely sitting on the fence. Lacking the communicative nature of the Golf, 3, and Focus, the Civic is still a planted car with nicely weighted steering, terrific brake feel, and swift acceleration.

Indeed, the new Civic is far more dynamically appealing than the 2015 Civic, with a chassis far more suited to forming the underpinnings of an Si and Type R. The Civic does ride firmly, however, and there’s a fair bit of suspension noise from the rear axle as the Civic attempts to cope with Halifax’s dreadfully rough roads. Yet like the Golf, the Civic brings the two sides of the coin together with a quiet cabin worthy of a higher price tag.

Not everything about that cabin is intuitive. Even if you’re running the touchscreen through Apple CarPlay, unfortunately a corded endeavour, you’re still left with bizarre volume controls on both the centre stack and the steering wheel. If you’d like to adjust the climate control fan speed as soon as you get in the car, you’ll wait a few moments for the system to boot, press the climate button below the touchscreen, and then adjust the fan speed.

For owners of a sixth or seventh-generation Civic, this must seem entirely un-Honda-like, and it once was. A sign that Honda is getting back to its ingenious, solution-driven mindset? The centre console is completely reconfigurable and integrates a sliding armrest. It’s an impressive solution for storage in a small car, and it could only be improved by making the armrest height adjustable, too. 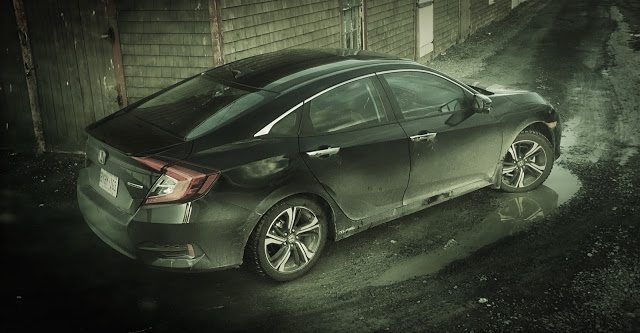 IS ANYONE BUYING IT?
Is anyone not buying it? The Civic was Canada’s best-selling car and third-best-selling vehicle overall in 2015, the 18th consecutive year in which the Civic outsold all other passenger cars. Nearly one in five compacts and nearly one in ten passenger cars sold in Canada are Honda Civics. Though sales dipped 2% in 2015 as Honda prepared the launch of this new, tenth-gen car, the Civic didn’t slide nearly as sharply as the compact car segment or the car market overall.

Similarly, thanks largely to a spike in the fourth-quarter, Honda Civic sales were healthy in the United States in 2015 even though overall car sales declined. U.S. Civic volume rose 3% to 335,384 units in 2015, the fourth-highest total among passenger cars. 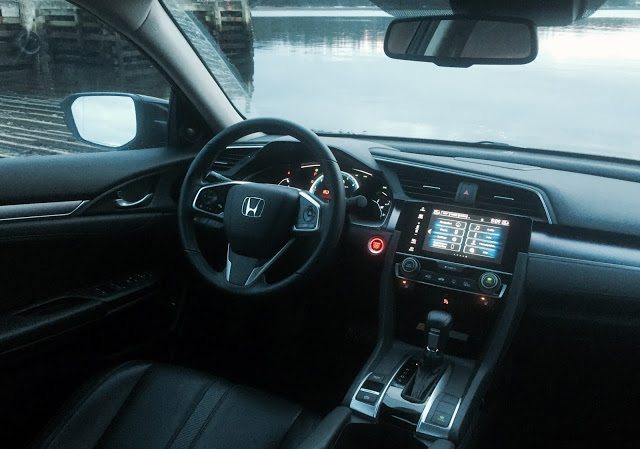 SHOULD I BUY SOMETHING ELSE INSTEAD?
Many Canadians don’t. But there are impressive alternatives. We’ve previously labelled the Mazda 3 5-door – Mazda Canada calls it the 3 Sport – the best small car on the market. The Volkswagen Golf, pricey though it can be, feels in most trims like it should cost $5000 more than it does.

HOW MUCH SHOULD I PAY?
A $29,000 Honda Civic is an impressive car, not simply because of the technological advantage it holds over similarly-priced larger cars, but because of its reasonable size and impressive refinement. There are, nevertheless, signs that you’re driving a $29,000 version of a sub-$18K compact sedan. Yes, there are semi-autonomous settings, but there’s no blind spot monitoring. Sure, the high-tech 1.5L turbocharged four-cylinder makes the Civic a quick car, but the audio quality is no better than decent, adjusting the tilt/telescoping wheel is a pain, and there’s no lumbar support for the passenger or driver. 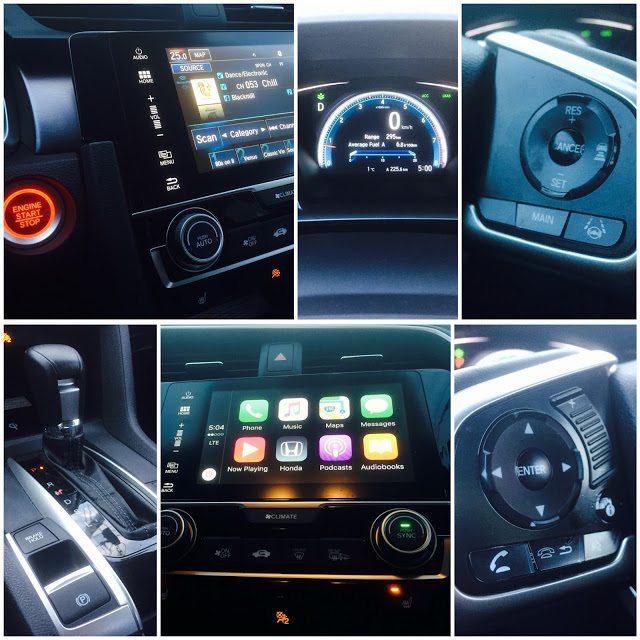 We prefer the styling of the Mazda 3 hatchback, the 3’s on-road demeanour, and the 3’s interior control layout. For those overlooking the recent diesel emissions scandal, the Volkswagen Golf’s premium aura and engaging handling make the Mexican-built German a real contender, too.

Yet for more than 60,000 Canadians in 2016 and more than 300,000 Americans, the 2016 Honda Civic is easily declared the best small car simply because it’s a better Civic. A Civic, only better. The name they know from the brand they know with the reputation they trust.

The good news? It’s a much better Civic.