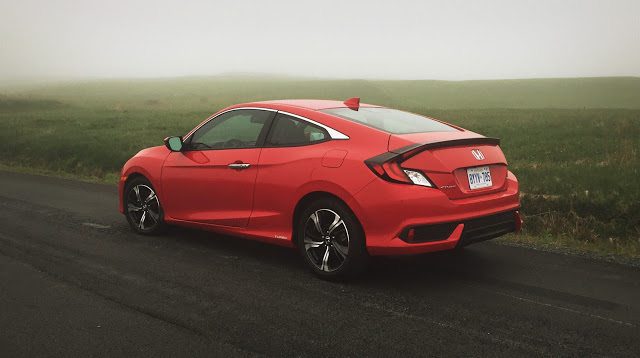 A streak which began in 1998 is all but certain to continue through calendar year 2016. The Honda Civic was, is, and will continue to be Canada’s best-selling car.

In order to keep the momentum alive, Honda reinstated the two-door coupe version of the Civic to a lineup which launched in sedan form late last year. This won’t be the end of the Civic’s bodystyle additions, either, as a hatchback will return in the near future, as well.

The hatchback, however, will look very much like the Civic sedan.

This Civic Coupe, on the other hand, is a far flashier design from the often conservative Honda style department. It won’t please everyone, but after the frumpy ninth-generation Civic Coupe did the nameplate no favours, after the edgier eight-generation coupe wasn’t terribly transformative, after conservative coupe designs were par for the course in prior Civic eras, this new car’s unique tail treatment, prominent sweeping character lines on the two long doors, and plunging roofline conspire to create a sporty look on a car which is, let’s remember, just a Civic.

Civic. It’s the car your neighbour drives. In fact, your other neighbour drives one, too. Oh, and look over there, two of your coworkers just leased new Civics. Come to think of it, you owned one or two Civics when you were younger. Your father knows a guy whose Civic odometer just ran past the 1,000,000 mark. Your cousin’s buddy tuned an old Civic’s engine to make 800 horsepower. Or was it a stereo with 8000 watts?

Whatever: Honda’s compact car is everywhere. Nearly one out of every ten passenger cars sold in Canada in the first four months of 2016 were Civics.

The question, then, is how do car buyers make sure that their purchase of a venerable, reliable, durable Honda Civic doesn’t create a situation where they can’t find their car in the Tim Hortons’ parking lot? That’s easy: they buy the Civic Coupe, thereby acquiring the same reliable Civic as everybody else but with a newfound sense of style, an athletic appearance furthered by ostentatious Turbo badging and flamboyant Rallye Red paint.

WHAT IS IT?
Honda’s tenth-generation Civic sedan appeared in dealers late last year accompanied by critical praise and ready acceptance.

Although the ninth-gen Civic continued Honda’s success in the compact car marketplace, it seemed like a regression for Honda, which typically built small cars which deserved to be nominated for top-of-class honours throughout their lifespan. 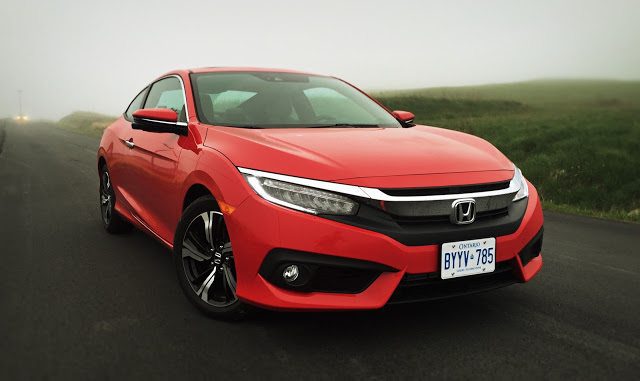 But while the ninth-gen Civic felt as though Honda built it to a price, the tenth-generation car is anything but. Structurally more solid, built better and with better materials, more technically advanced than most rivals, and more distinctively styled, the Canadian-built 2016 Honda Civic is quite rightly a hot seller.

The arrival of this new coupe derivative serves to turn up the heat.

Like it or not, the Civic Coupe is arguably more differentiated from its sedan sibling than it’s been over the course of the last number of generations, and the very fact that the Civic offers a two-door version at all is noteworthy. You won’t find coupe versions of other top-selling compacts: Elantra, Corolla, 3, Cruze, Jetta, Sentra, Focus.

The 174-horsepower turbocharged 1.5L engine first appears in the $26,250 EX-T, which comes standard (at present) with the CVT. Honda Sensing is once again a $1000 option, but comes standard on the $29,250 2016 Honda Civic Coupe Touring we tested last week. Only the EX-T (sans Honda Sensing) and the Touring are offered in the Energy Green Pearl paint Honda first showed on the concept version of the new coupe.

HOW BIG IS IT?
Every inch a tenth-gen Civic under its more eye-catching clothes, the 2016 Civic Coupe rides on the same 106.3-inch wheelbase of its sedan sibling. The two-door and four-door Civics also share the same 70.8-inch width. In terms of height, however, the new Civic Coupe is nearly an inch lower than the sedan. Bumper to bumper, the Civic Coupe is a very noticeable 5.4 inches shorter than its donor car.

Naturally, rear seat ingress is more complicated, and it’s a particularly challenging exercise from the driver’s side. But space in the Civic Coupe’s rear seat is exceptional – Honda’s specifications say the sedan provides only 38 extra millimetres of rear legroom, and the sedan’s 59 additional millimetres of rear headroom wasn’t necessary for me to get comfortable back there.

It’s not a perfect family car, particularly for a family with an infant car seat, but our 31-month-old had no trouble getting in and out and was an easy reach for buckling up. It’s genuinely usable space, not just when you’re in a pinch. The 337-litre Civic Coupe trunk is pretty decent, too, and slightly bigger than the ninth-gen Civic Coupe’s cargo area.

DOES IT WORK?
16 extra horsepower and 24 additional lb-ft of torque really do make a difference, particularly when that torque arrives just off idle at 1700 rpm. The 2.0L four-cylinder that comes standard in the 2016 Civic is undeniably effective, but the 1.5T creates a genuinely quick car. Car & Driver says the 0-60 mph time drops from nearly eight seconds in a  2.0L with the manual to sub-seven-seconds in the CVT 1.5T, yet fuel economy improves in the more powerful engine.

The Civic may be quick off the line and torquey in the mid-range, but the continuously variable transmission still conspires against acceleration. It simply doesn’t sound pleasant, and droning high-rpm acceleration isn’t the kind of acceleration a keen driver seeks. In daily driving, the CVT isn’t adversarial, and the paddle shifters add a measure of control to the proceedings, as well. But there’s no fun in accelerating here. With such an impressive powerplant, that shouldn’t be the case. Bring on the manual. 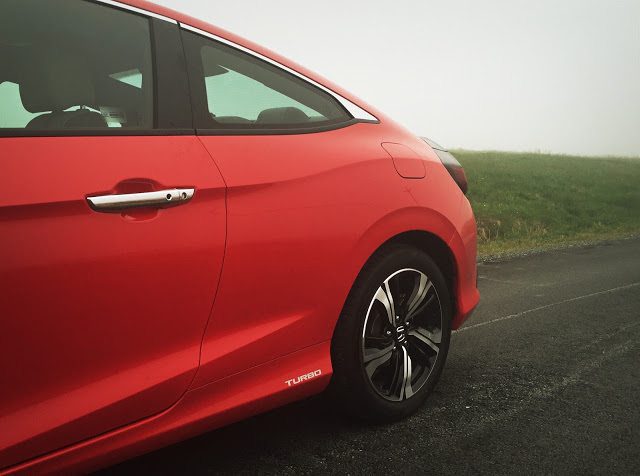 In comparison with the four-door Civic’s configuration, the 2016 Civic Coupe’s firmer ride and unnaturally weighty steering don’t do the cars any favours, either. Too firm, too weighty? No, but it’s all done in an attempt to convey the aura of sportiness, rather than being manifested as symptoms of a genuine performance car.

And yet the 2016 Honda Civic Coupe Touring is certainly a composed handler, an easy car to hustle through a series of bends. At no point in its rev range is the 1.5T out of sorts, left wondering where the power went or why lag mysteriously appeared.

Hardly the sharp and interactive Integra Type R for which you sought out a co-signer during your senior year at McGill, the Civic Coupe is still powerful enough and grippy enough to embarrass your brother’s Elantra.

South of the border, U.S. sales of the Civic jumped 29% to 122,634 units in the first four months of 2016, tops among compact cars. In fact, the Civic was America’s best-selling car outright. Based on current inventory, approximately 12% of the Civic’s U.S. output comes from the coupe bodystyle. 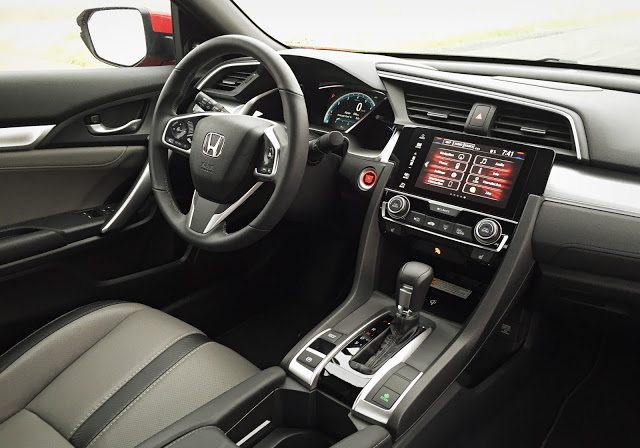 SHOULD I BUY SOMETHING ELSE INSTEAD?
At a hair over $20,000, the 2016 Honda Civic Coupe is very much in a world of its own, both because of its impressive dynamic ability and the amount of interior space it offers in a style-centric coupe format. But for a buyer considering an example the new Civic Coupe that’s this expensive, the number of viable alternatives increases sharply.

The Mustang and FR-S are both rear-wheel-drive with imperfect rear seats. As for the two all-rounders, the Accord offers a more mature real-world driving experience; the GTI provides greater performance appeal.

‘;
document.getElementById(“vinads_div”).innerHTML = lfAd;
}
});
HOW MUCH SHOULD I PAY?
Even loaded up with luxury kit and safety equipment and a surprisingly swift turbocharged engine, $29,250 seems like an awful lot of money for a Honda Civic Coupe that isn’t an Si, doesn’t it? Particularly when there’s not even an option (yet) for a three-pedal layout.

The true Honda aficionado may be wise to consider the base 2016 Honda Civic Coupe LX with the manual transmission, a car which still provides heated seats, bluetooth, Apple CarPlay/Android Auto,  and 158 horsepower. The money that’s left over to make the LX look nice – at $21,150 the LX is $8100 less than our Touring tester – is downright plentiful.

If you’re keen on spending serious coin on a new Civic Coupe, we strongly encourage waiting to see what Honda can do when they turn this much-improved tenth-gen car into an Si or Type R edition.

WHAT’S THE VERDICT?
You expect a $29,250 Honda Civic Coupe to be a little bit more fun, more firm, more engaging, and more stylish than the four-door $28,850 Honda Civic we drove earlier this year. And on those counts, the 2016 Civic Coupe lives up to its billing.

Less expected, however, is an entirely usable rear seat and a capacious trunk with a large opening.

There are improvements which could be made. I’d like less road noise from the Continental ContiProContact tires. I’d like a conventional volume knob or a conventional volume setup on the steering wheel. If Honda is going to make the Civic Coupe look this fast and slather it with turbo badges, the firm ride should be married to slightly sharper handling with quicker turn-in response.

Honda also needs to get that manual transmission into this car in a hurry.

Yet for the traditional two-pedal buyer, this CVT isn’t a reason to avoid the Civic. And with so many reasons Canadian car buyers already have for automatically choosing the Civic, the dearth of reasons to avoid the new coupe assures Canada’s most popular car of continued success.

But determining whether you should buy a new 2016 Honda Civic Coupe depends on your answer to this leading question: aren’t you tempted to wait and see what else Honda can do with this platform, particularly in this two-door format?