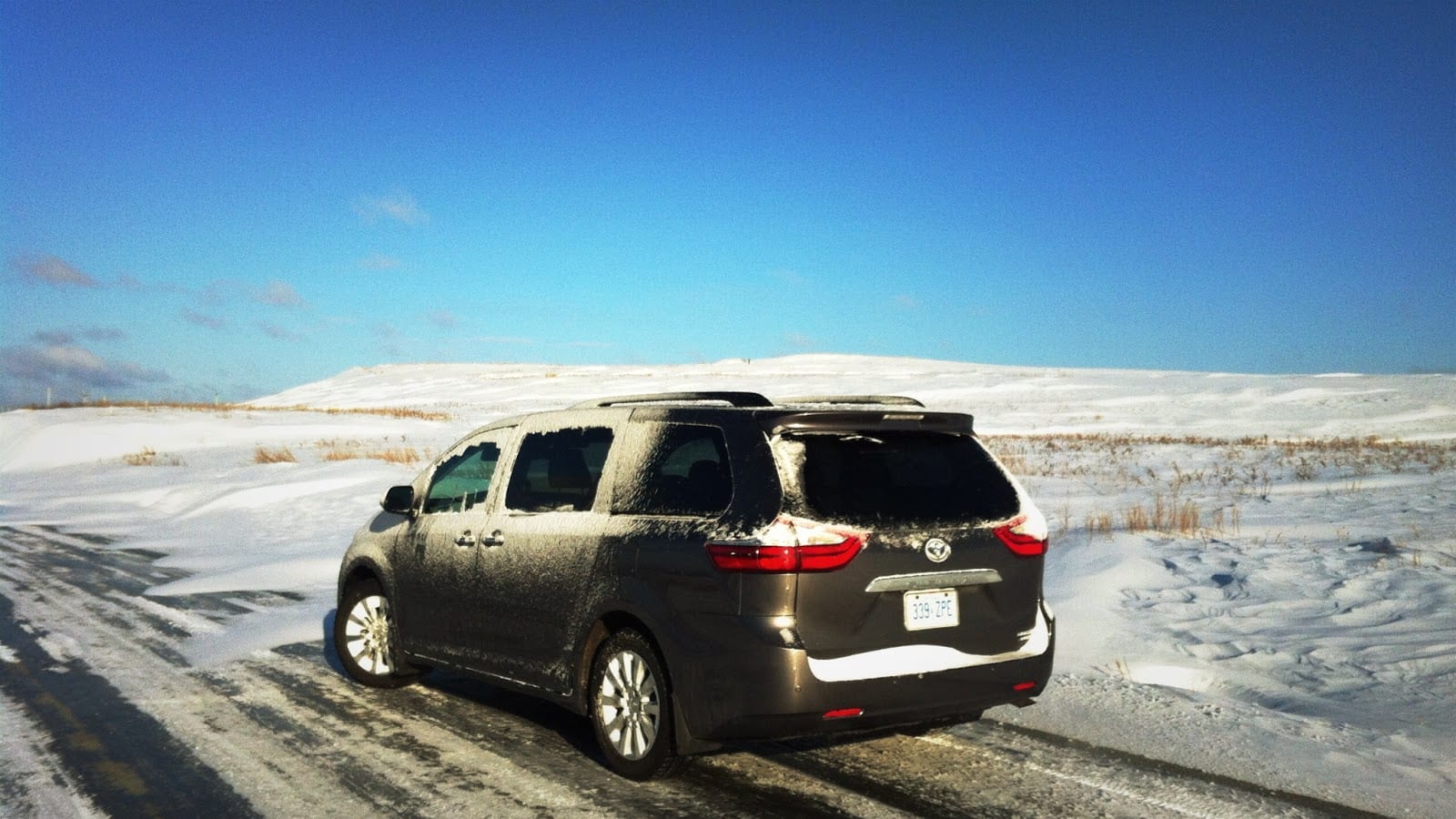 2015 Toyota Sienna XLE Limited AWD – The One And Only 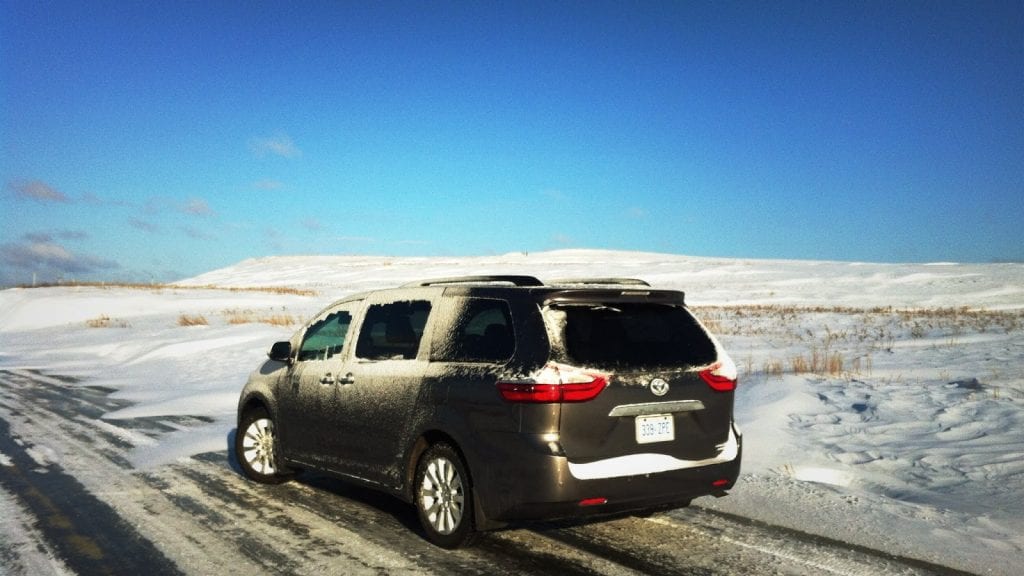 Why do automakers bother? Consider Toyota as an example. Sienna sales over the last three years averaged nearly 12,000 annual units, up 42% compared with the average from the previous four years. But instead of accounting for slightly less than 7% of all Canadian minivan sales, the Sienna’s market share climbed above 12% in 2014, and to 14% in the last quarter of 2014.

The party doesn’t have as many attendees as it did a decade ago, but the music is still playing. And because so many of the B-list guests gave up, it’s much easier for the remaining characters to be big, big stars.

Standing out from the pack still requires a measure of nonconformity, however. The Chrysler twins have their Stow’N’Go seating and value-oriented pricing. Kia has most recently plumbed the depths of their bag of styling tricks to release an eye-catching Sedona with its own noteworthy interior configuration. Honda’s Odyssey sets a high bar for car-like dynamics and efficiency. Nissan, well, the latest Quest was rejected by Canadian consumers. And the Sienna?

Aside from an aggressive SE model and an eighth seat which in some models can be stowed in the cargo area, the availability of all-wheel-drive serves to differentiate the Toyota. 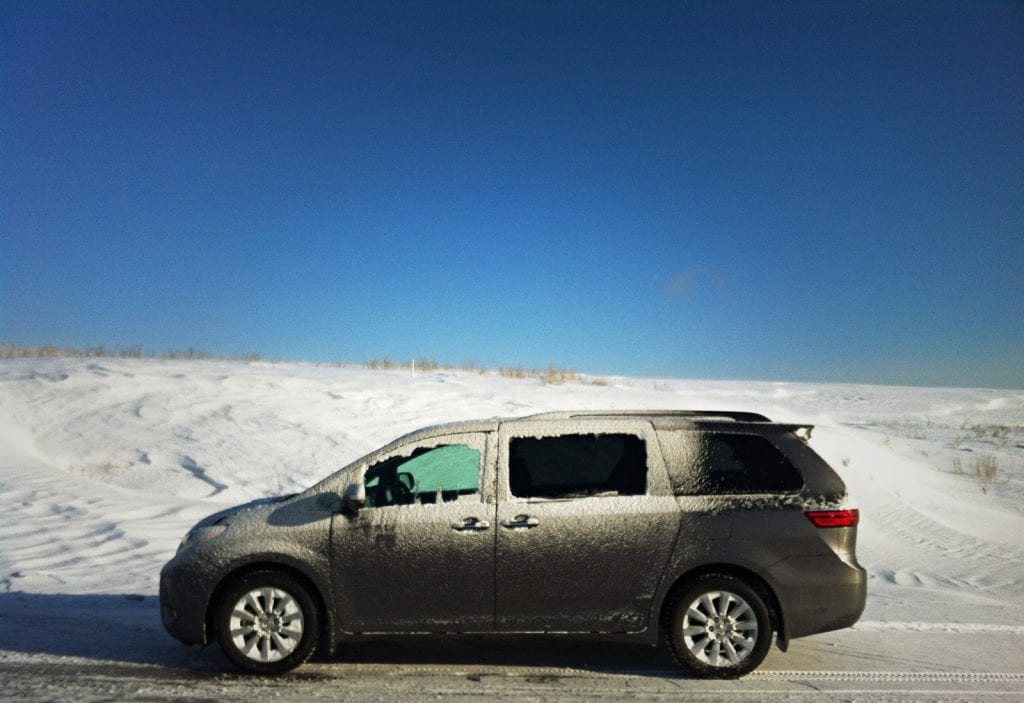 Refreshed for the 2015 model year and loaned to us for a week by Toyota Canada, the Toyota Sienna offers its consummate experience in XLE AWD form with the Limited package at $50,523. (In the U.S., this van is known as Sienna Limited Premium AWD, and it’s priced at USD $47,495 including fees.) For those willing to forego a lengthy list of features (HID headlights, blind spot monitoring, rear cross-traffic alert, front and rear park assist sonar, power liftgate, dual sunroofs, rain-sensing wipers, navigation, driver easy speak, dual-view rear-seat entertainment, leather seating, proximity access, heated steering wheel), the Sienna LE can be had with all-wheel-drive for less than $39,000.

LE or XLE or XLE Limited, adding an extra pair of driven wheels to the Sienna does force a couple of key sacrifices compared with the front-wheel-drive versions. There’s no eighth seat, no ottomans in the second row, run-flat tires only, and official fuel consumption ratings climb to 14 L/100km in the city and 10.2 on the highway from 13 and 9.5, respectively. We saw a frightening 16.4 L/100km, but asterisks abound. Roads were snow-covered for much of the Sienna’s visit, temperatures were well below freezing, there was plenty of city driving and very little time on the highway, and the van was fresh from the factory, flagrantly broken in by the right foot of yours truly. Conditions were not at all conducive to forming accurate predictions of long-term real-world fuel economy.

But if an automaker ever wanted to impress a car reviewer with the one remaining all-wheel-drive minivan, a week during which consistent dumps of snow caused a city to buckle at the knees was absolutely the right time.

“Oh,” say you, “front-wheel-drive and winter tires are fine.” And yes, that’s true. I drove a couple of front-wheel-drive cars with winter tires during the same span of time, as well as an all-wheel-drive Ford Escape on all-season tires. The difference: the other vehicles, Escape included, needed our driveway at least partially cleared in order to vacate the premises. In a city like Halifax, full of steep hills and slathered in ice, there was a level of dexterity required for the other vehicles to get underway. The Sienna was unencumbered by such limitations.

Does a new Sienna buyer need all-wheel-drive? No, but on the shores of the north Atlantic in a winter that suddenly turned awfully wintry, the AWD upgrade was conspicuous in its effectiveness, not least because the system so instantly and imperceptibly shuffled power to the proper Bridgestone Blizzak-shod wheels.

On other counts, the Sienna is better than it used to be. Parents in school parking lots will continue to appreciate the feather-light steering, but the Sienna is noticeably less barge-like in routine driving. Gone is much of the float that beset the 2011-2014 Sienna, but while the updated van (thanks to a stiffer unibody with 142 extra spot welds, according to Toyota) is a superior handler, it still doesn’t have the finesse of the Odyssey. Nor is its ride as firm, thankfully, as the Sienna is as unflustered on rough roads as one can reasonably expect from any vehicle of any kind. Victory is mine, saith the 119-inch wheelbase.

Suspension noise too easily makes its way into the cabin, as does the growl of the 3.5L, 266-horsepower V6 when under heavy throttle. (Teamed with a smooth 6-speed automatic, it’s a decently punchy engine, if that matters to the typical minivan buyer.) Yet overall, the Sienna is memorably quiet, aided by Driver Easy Speak, which amplifies the driver’s voice for rearward occupants through the speakers, not so you can shout at your children more easily, but so normal conversation volume can be maintained. It didn’t work as well here as in the Highlander, however, nor was the JBL audio system all that impressive. Blame minivan acoustics. There’s an awful lot of vacant space to fill with high quality sound.

Space? Uh, yeah. There’s some of that. Cargo volume rings in at 1107 litres. The third row is fine. The first two are as capacious as anticipated.

The second row is legendary.

No, the middle seats don’t fold into the floor, and for some that’s the worst omission in the history of minivan features. But they’re not that heavy, and their forward/backward range of motion is a stunning thing to behold. Bring child to you. Send child away. 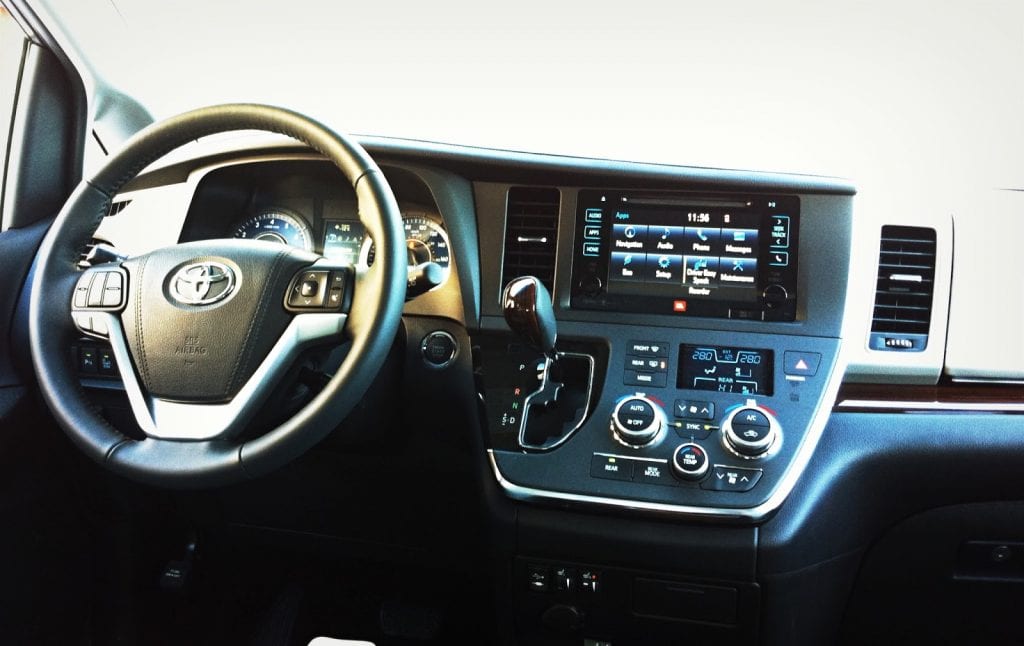 Owners of former third-gen Siennas will quickly spot the interior changes in the front of the 2015 Sienna. Improved material quality is appreciated, but the rearranging of climate controls, buttons, knobs, and screens are what really propel the Sienna forward from laughingstock to class-competitive status. The Entune system is straightforward. Better yet, in a season where the HVAC system gets a constant workout, the temperature and mode settings are finally sensible.

We’ll be reviewing the all-new Kia Sedona before winter ends. While it’s easy to criticize what we perceive to be a faulty Grand Caravan-cancelling FCA strategy, it will be interesting to see what comes out of the Windsor, Ontario plant next. That leaves the two top-selling Japanese brand alternatives, and the means by which you establish the class leader depends on priorities. Available all-wheel-drive and a gargantuan second row may thrust the Sienna into the winner’s circle for some, particularly those who fight wintry battles for three to five months. The fan of driving whose altered lifestyle no longer agrees with S2000 ownership will favour the on-road behaviour of the Odyssey.

Regardless, there can be little argument that these versatile, capable, expansive minivans (or should we say maxivans?) offer more vehicle per dollar than any other type of modern automobile. You may choose to avoid the $50K adaptations, but don’t let that be a pox on the overall Sienna house.