The Porsche Macan’s diving roofline severely cramps cargo capacity. The centre hump in the rearward portion of the cabin is almost as high as the seat cushion, which could force the Macan into becoming a four-seater depending on the number of legs possessed by its passengers.

The driver’s view out the back is far from expansive, and the driver must also deal with some odd layouts for cruise control, rear wipers, and centre-console mounted switches which are sometimes blocked by the shifter.

The Macan is a pricey piece of kit, with options required on a (CAD) $55,415 Macan S to turn it into a car with parking sensors, a backup camera, heated rear seats, and navigation. Our tester costs $65,565 and it still doesn’t have cooled seats, auto-dimming mirrors, keyless go, blind spot monitoring, sunshades, a proper hi-lux audio system, or any of Porsche’s performance options.

Moreover, even with optional $1440 19-inch wheels, the Macan S still looks like it’s wearing base footwear.

Life’s rough. Here I had a week of load-lugging to get through, a week that was to end with a 600-kilometre journey to the wedding of my wife’s cousin in Cape Breton, and it’s warm enough in mid-October to need constant air conditioning, and the Porsche only very gradually cools its occupants. All the while, I’m accidentally turning the heated steering wheel on and off because the button is on the back of the steering wheel, and the button doesn’t have enough feel, and feel is essentially the only thing an auto writer worth his weight in press junket shrimp cares about.

And, in the context of small utility vehicles, everything else is basically perfect.

The experience is literally special from the start. A turn of the key prompts a large bellow from the quad exhaust pipes, and the rumble persists for an extended period as the twin-turbocharged 3.0L V6 (340 horsepower, 339 lb-ft of torque) warms up on a crisp morning. You won’t hear this noise every time you remove your foot from the brake at stoplights – the Macan S has an auto-stop function that can be turned off (and which Sport mode turns off on its own), but the engine comes to life smoothly and quietly in those circumstances.

As a follow-up to the Audi SQ5 I drove the week before, the Macan S’s powerplant felt almost imperceptibly underwhelming. Where the 354-horsepower supercharged 3.0L V6 in the SQ5 delivers its power with a brick-breaking punch at any moment, the Porsche’s engine is more characterful, happier to rev for the sake of revving, and it also makes a better noise.

The SQ5’s 8-speed automatic is also superior to the Macan’s 7-speed PDK, particularly in everyday driving where the dual-clutch Porsche unit tends to lug around in the briefest moments of confusion at low speeds. It’ll certainly snap off barking upshifts in a hurry when under heavy throttle, however. Indeed, outside of comparisons with ZF’s renowned 8-speed, the PDK would likely shine.

Yet it’s the Porsche’s manners when driven conventionally that cause the Macan to stand out. Yes, the SQ5 is a capable handler; a surprisingly adept vehicle on twisty roads. But the Audi’s always telling you how sporty it is, while the Porsche walks more walk instead of chattering more chit-chat. It rides much more serenely. It’s very, very quiet. The seats, while offering no adjustable lumbar support, are worlds ahead of most optional sport seats in terms of long-distance comfort and provide a huge range of head restraint adjustment. Nevertheless, when given an opportunity, the SQ5-related Macan shows which VAG engineers better understand suspension geometry.

The Macan S isn’t that tall, and despite some true off-road credentials, it’s more of a hatchback than an SUV. Yet viewed as a small luxury crossover contender, the Macan’s planted stance and remarkable agility and lack of body roll are a real shock to the system. Its steering isn’t full of feel, but it’s pleasantly heavy and very direct. Nothing will upset the Macan mid-corner.

Setting aside its quickness and disarming agility, the Macan’s brakes may be the car’s most confidence-inspiring facet. Rotors measure 350mm at the front and 330mm out back. Their outright stopping force is modulated by a progressive pedal where the amount of pressure applied by your foot is perfectly matched by the rate of deceleration. No competitor brakes like this, and no competitor feels like this under braking, either.

Though not terribly special to look at outside, particularly without the 21-inch, $4360 Sport Classics, the Macan does have a few special exterior bits. It does look like a Porsche, and the taillights create a beautiful signature when lit up. 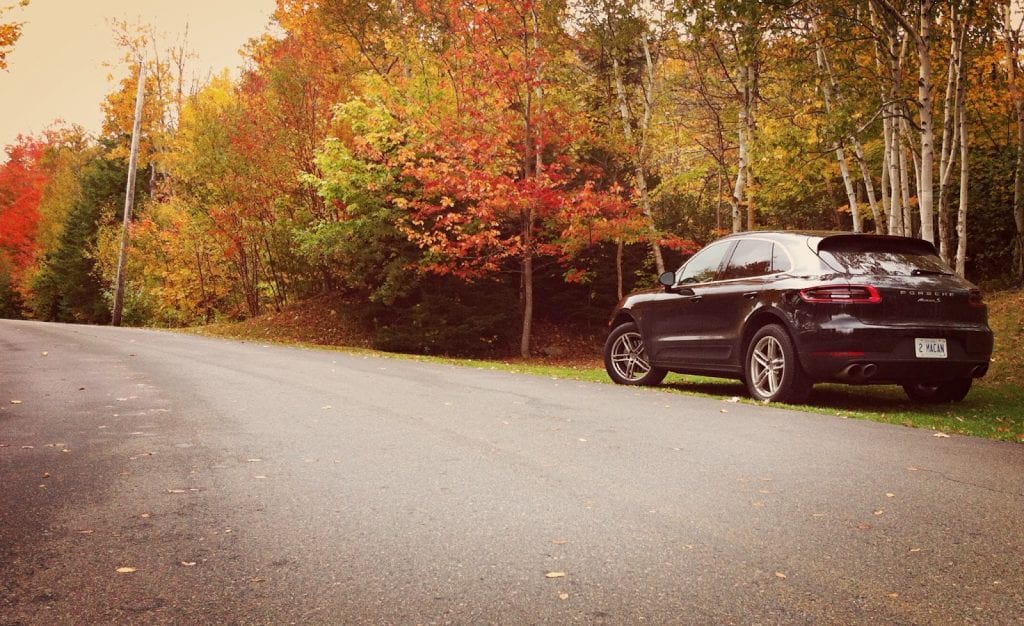 Inside, the Macan is certainly unusual for drivers accustomed to very upright designs. Most buttons and switches are laid out along the trajectory of your relaxed right arm. There are times when, with the shifter in drive and the armrest pushed forward, it’s awkward to access lesser-used buttons. The climate controls also bring your eyes very far down from the road. The whole system is full of touch points, unlike the flush non-buttons in a Cadillac SRX, for example, and if a week isn’t long enough to memorize placements, two should be sufficient. The rear wiper button isn’t properly positioned on the wiper stalk, thereby constantly squirting wiper juice all over the tailgate when all I called for was a solitary swipe, and cruise control functions aren’t intuitive. But the overall sensation in the Macan’s interior, even a moderately optioned one like this, isn’t of a car that is dependent on features to create the aura of luxury. Rather, it’s the low-slung seating position, plentiful glass, thick-rimmed three-spoke steering wheel, and centre-mounted tachometer that produce a driver-centric cabin.

In other words, it feels like a Porsche. The Macan S also drives like a Porsche, and it is thus entirely authentic, like it or not. Perhaps the biggest disappointment isn’t found in the bottom corner of the Macan S’s window sticker but in the way the Porsche makes other otherwise lovely small luxury crossovers feel. How is it that the Macan S both rides more comfortably and handles more effectively and proceeds down the road with more enthusiasm? 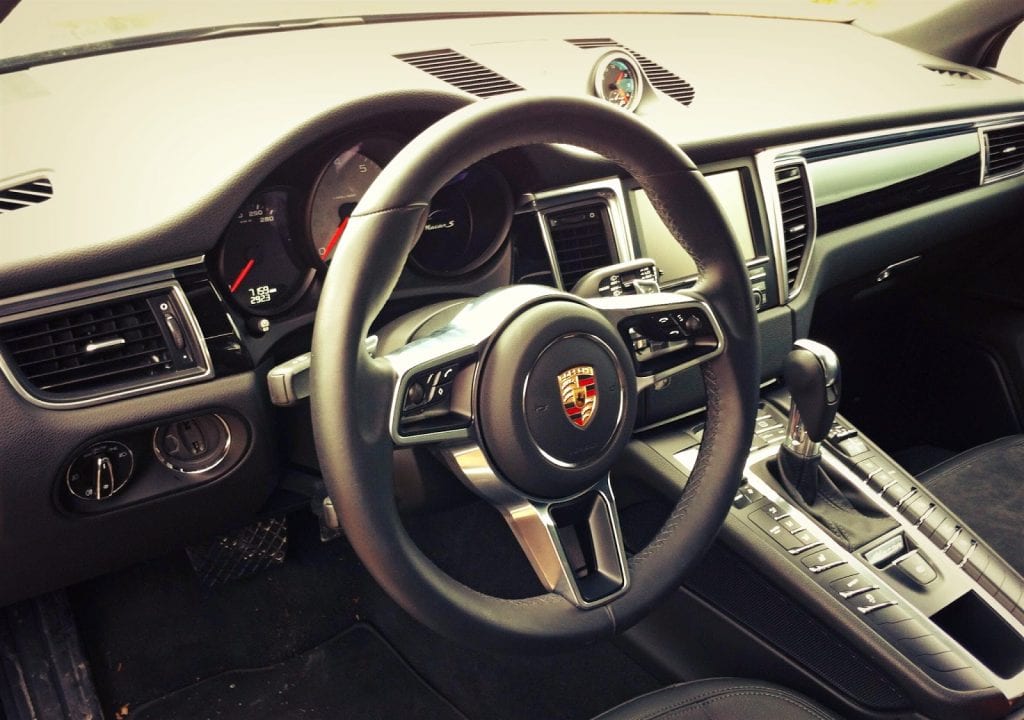 No, the fact that the Macan tarnishes other small luxury crossovers is not its biggest disappointment. If utility is a prime concern, the Porsche Macan is a big league flop. The cargo area’s flexibility was apparent when, with seats folded, I loaded 224 diapers, four litres of juice, two litres of milk, one cucumber, one dish rack, two pounds of goat yogourt, four bags of chips, and a king size memory foam mattress (still in its box, naturally) with plenty of room to spare. That’s why a Macan driver doesn’t want an M3 sedan. (Also, we drove up a rocky path to the top of Creignish Mountain, which we wouldn’t have done in any rear-drive vehicle, certainly one with less than six inches of ground clearance.)

But with the seats up, the Macan S offers less than 500 litres of cargo capacity, less than half the space behind the seats of a Honda CR-V, which is six inches shorter than the Macan from bumper to bumper. Our Baby Jogger Summit X3 looks tiny in the back of a Subaru Outback; it eats up most of the floor space in the Macan.

That’s a real-world concern, but it’s an issue which may well disappear after a test drive. It certainly did for me after spending a week in this Porsche Canada car. Dynamically, the Macan is in a league of its own, and Porsche has priced it as such. And remember, this is a Macan without performance-oriented rubber, without the ceramic composite brakes, electronically controlled dampers, air suspension, torque vectoring, launch control, a Sport Plus button, or a 400-horsepower 3.6L twin-turbo.

Therefore, this may well be the least impressive Macan, and it’s ridiculously impressive.