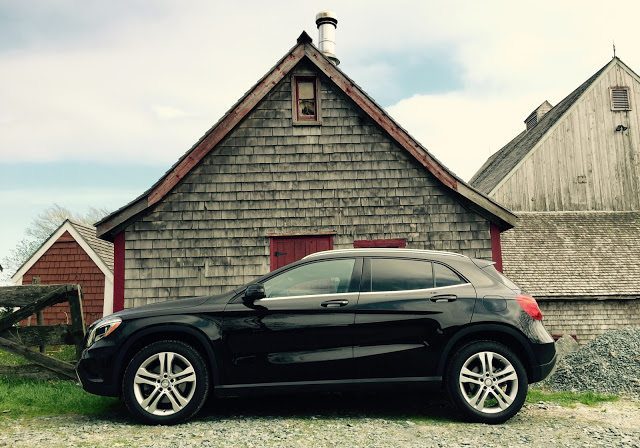 OK, so where does this fit?

For consumers who prefer names like Accord, Cruze, Explorer, and Camry, the Mercedes-Benz family tree is about to become even more complicated as the automaker prepares to relaunch a number of products with new names. But the first GLA-Class, the vehicle you see here, will continue to be called the GLA. It’s the entry point to Mercedes-Benz’s utility vehicle lineup.

There’s the upper-crust, militaristic G-Class, also known as the Geländewagen.

Then there’s the GL-Class, a three-row challenger that serves as the more mainstream flagship for the brand’s SUVs and crossovers.

The M-Class, which you’ve seen badged as the ML for nearly two decades, will soon be called the GLE. There will be a version of it, a GLE Coupe, to take on BMW’s X6.

Below that, you’ll find the GLA, seen here in GLA250 4Matic form.

The GLA’s foundation is really the CLA sedan, a car Mercedes-Benz actually prefers to call a four-door coupe. Although elevated, detrunked, and behatched, the GLA uses the CLA’s underpinnings and powertrain. 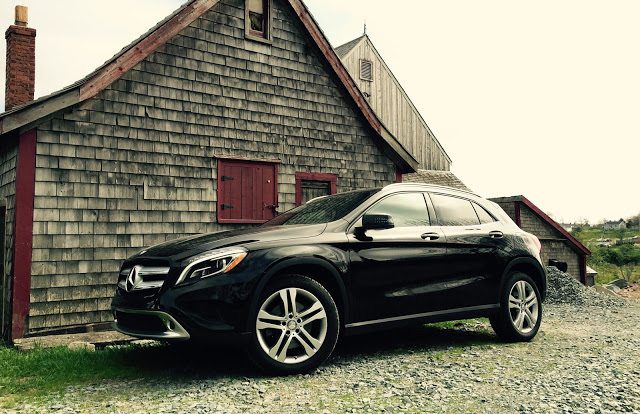 The CLA, in turn, is a sedan version of the A-Class (not sold in North America) that takes on Volkswagen’s Golf as a premium alternative in Europe.

In Canada, the GLA joins the B-Class as another hatchback entry point to the Mercedes-Benz brand.

Yet while the B-Class is more of an upmarket Toyota Matrix-style car with front-wheel-drive and optional all-wheel-drive, the GLA wants to be viewed as a BMW X1 and Audi Q3 crossover rival and comes standard in Canada with 4Matic all-wheel-drive.

C-A-R
We could argue for days, on both sides of the debate, whether the GLA and its cohorts are true crossovers, let alone genuine SUVs. The GLA is, rather obviously, very much a hatchback version of a sedan.

But not so visible on our black test car is the black cladding around the wheelarches.

Is it really just a hatchback? Sure, albeit a tall one. But since the car is marketed as a small luxury crossover and perceived by the target market as such, we’ll give Mercedes-Benz the benefit of the doubt.

INSIDE
If you’re familiar with the Mercedes-Benz CLA (or our reviews of the CLA250 and CLA250 4Matic), you’ll be familiar with the interior layout of the GLA250 4Matic. It’s a stylish cabin – the air vents are very cool, for example – but many high quality bits are cancelled out by great swathes of matte black plastic that are simply too chintzy for the Mercedes-Benz badge.

Our car was optioned up with a $4000 premium package (automatic climate control, blind spot monitoring, active park assist, navigation, and a panoramic sunroof) as well as a $2000 premium plus package which added a power tailgate, among other features. With these packages, the Mercedes-Benz GLA250 passes the luxury test even if the feel of the cabin comes up far short of the brand’s own C-Class.

Without the extra $6000 worth of amenities, the GLA wouldn’t feel remotely worthy of its luxury pretensions inside. Not with a small, silly screen perched atop the dash like a car with one wheel halfway up the curb; not with enough vibration coming through the cabin in a too-high gear to turn the regular seats into massaging chairs. 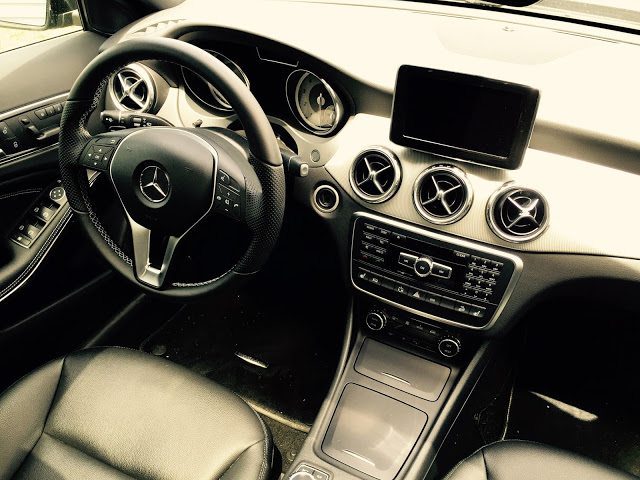 But if the GLA is identical to the CLA up front, it’s a very different story as you move toward the back of the car. Because the GLA’s roof doesn’t plunge toward the trunk line, getting into the rear seat is easier, and spending time back there doesn’t feel as claustrophobic. Neither the CLA nor GLA are limo-like, but I’ve had three lanky adult males in back who coped without complaint.

It’s behind the rear headrests that the situation is so dramatically altered, of course. Rather than the CLA’s 371-litre trunk, the GLA has a 487-litre cargo hold, one that’s more suitably shaped and more easily accessible. (Plus, the GLA’s cargo area can be expanded to 1235 litres with the seats folded.) They, whoever they are, say North American car buyers aren’t keen on luxury hatchbacks and wagons. But once into a luxury crossover… my, but isn’t that wide open hatch a blessing.

POWERING
If a car’s forward motivation related only to its engine, a far greater number of cars would be honoured with substantial praise. But there’s a transmission involved to, you see. The GLA250’s turbocharged 2.0L four-cylinder produces a pleasant 208 horsepower and a truly impressive 258 lb-ft of torque. It’s a terrific powerplant.

The 7-speed dual-clutch gearbox, on the other hand, is not so deserving of our applause. Particularly when the GLA is in Eco mode, the transmission hangs on to gears too long and slurs shifts annoyingly. Once at a steady speed, the 7-speed shuffles around between fifth and sixth and seventh, aimlessly searching for the right gear in that moment.

Manual mode, in which you’ll use the paddle shifters to cycle between gears, is fine, but not something you’ll do during routine driving.

Sport mode is best, but it’s too aggressive and theoretically inefficient (often holding a lower gear, on alert for a forthcoming prod of the throttle) for a run to the shops with your mother-in-law. Alas, there is no Normal setting.

The transmission isn’t bad, not in the sense that it stands in opposition to the impressive 2.0L turbo four-cylinder. But it does periodically stand in the way.

HANDLING
Fortunately, while the GLA carries over both the good and the bad of the CLA’s powertrain, the crossover version doesn’t suffer from the CLA’s poor ride quality. The GLA250 4Matic lopes along admirably, firm but not crass; levelheaded rather than edgy. Naturally, it doesn’t grip like the CLA in corners – it is riding noticeably higher, and our test car was still on its winter tires. 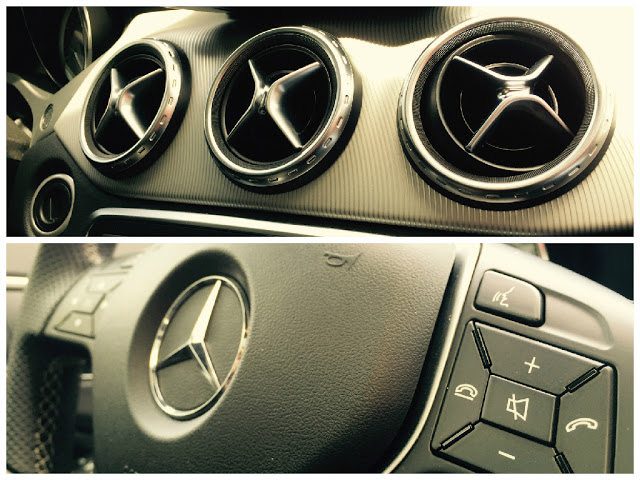 The steering lacks the CLA’s sharpness, and the body roll alerts you to the fact that this Mercedes-Benz is tuned more for comfort than athleticism. Yet removing the CLA’s key dynamic fault is a core part of the GLA’s appeal, and the GLA250 4Matic manages to provide a semblance of fun on a twisty road with greater maturity if the road gets rough.

A BMW X1 is in the same region, except that it’s more powerful in xDrive28i form and can be significantly more powerful (300 horsepower) in xDrive35i trim for less money than our GLA250 4Matic tester. The Audi Q3’s advertised base price is slightly less costly than both because it’s available without Quattro all-wheel-drive. And there is another GLA, the aforementioned GLA45 AMG. It’s obscene in more ways than one and not at all elevated. But it certainly elevates the mercury on the hot hatch-ometer.

SELLING
The GLA therefore leaves us with divided opinions. It’s quick, but the transmission’s awkwardness leaves too much fun on the table. It’s nicely equipped, but not built to the standards of the last Mercedes-Benz we drove, the C400 4Matic. Its design isn’t as controversial as the CLA’s, but many bystanders told me they were confused as to what the GLA actually is. It’s relatively affordable, but when properly outfitted, it’s as expensive as far roomier and more pleasant on-road vehicles like the Hyundai Santa Fe XL we drove recently.

Hyundai? Or Ford, or GMC, or Honda, or even Toyota? There’s no comparison, of course, not just because of the size of similarly priced and equipped vehicles from mainstream brands but because of the badge. And that Mercedes-Benz badge is a powerful one. In May, Mercedes-Benz reported its best month of Canadian sales in the company’s history.

Regardless of how good or bad or, in actuality, moderately decent the GLA was going to be, we always knew this little Benz crossover would be a hit. Canadians have acquired more than 2000 since the GLA arrived last September. Indeed, the most recent month of reported sales, May, was the GLA’s best month yet with 312 sales. Expect a few hundred more sales in June, and July, and August, and, well, you get the idea. The GLA is good enough to be successful, just not good enough to be great.