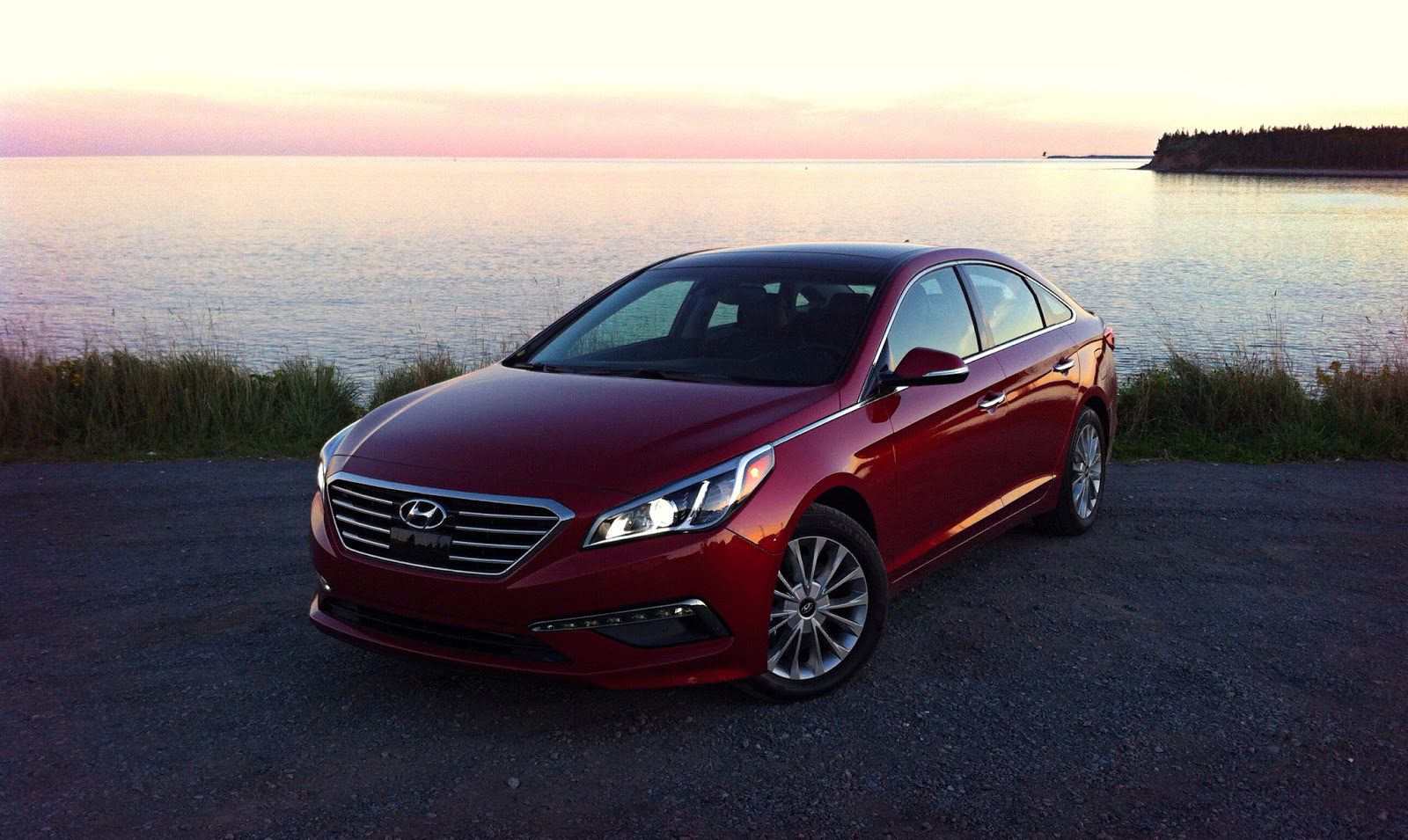 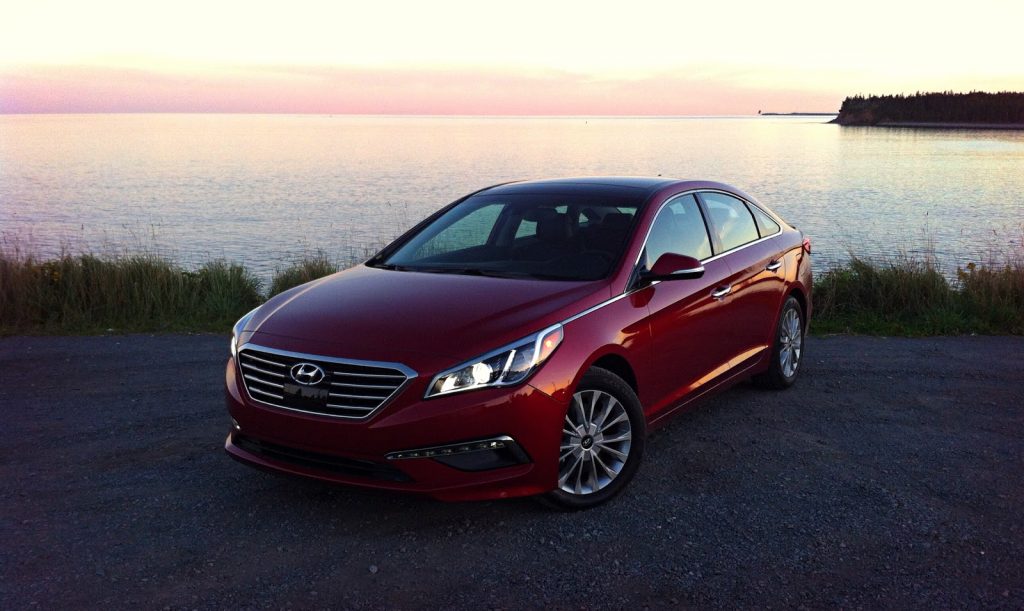 In the corners of our brain where the abstract controls the synapses, trains run on time only if we allow a car to charm us, to woo and seduce and enchant.

I find the sound of a Jaguar F-Type V8 S appealing and the wind-in-my-hair romanticism of a Mazda MX-5 captivating and I’m fascinated by the roofline of Mercedes-Benz’s CLS Shooting Brake.

There are other corners of our brain, however, that look a lot like spreadsheets. And on those spreadsheets, there are no columns for charm or seduction or fascination.

Increasingly, midsize cars perform very poorly in the corners of my brain first mentioned, and exceedingly well in the latter.

I’ve operated under the impression that there was a certain subjective appeal to the outgoing car, a vehicle which was, at the very least, good enough on spreadsheets to allow some consumers to buy the car almost on the merits of its unique exterior design alone. 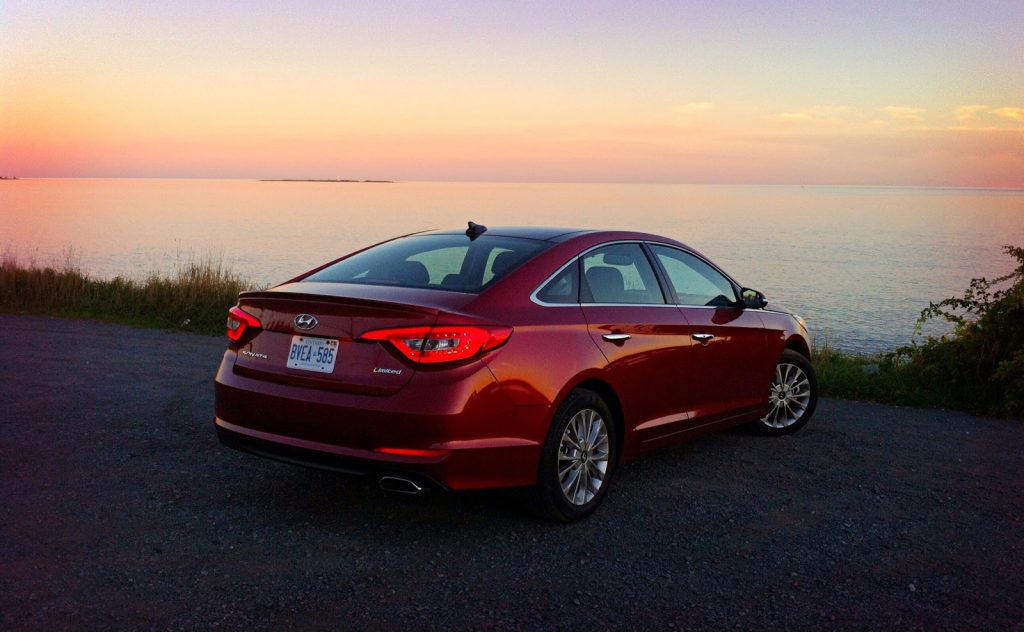 On sale in early 2010, the sixth-gen Sonata didn’t look at all like any of its rivals, with swept-back headlights, a long chrome beltline, and a coupe-like roofline.

It was a revolutionary departure for Hyundai, especially given the stodginess of its predecessor.

Many of the same themes have been carried forward for 2015, but the revolution has ended. Hyundai clearly feels as though they’ve made it, as though they’ve established a place for the Sonata in America’s competitive midsize sector and no longer need to market the most eye-catching car in the class.

You’ve probably seen the car live by now and rendered your verdict; you can look at the images if not.

Personally, I’m let down, as it feels to me as though the seventh-generation Sonata looks like it could have been the car that arrived before the sixth-generation Sonata, before Hyundai decided to make the Sonata less stodgy; less upright; less formal.

Instead, so-called progress has resulted in a car that simply doesn’t appear like the next new thing.

Its wheelwells are too big for its wheels, which on this specific car are terribly Buick circa 1996. There’s a vast amount of acreage between the top of the rear wheel and the C-pillar. Visually, the car rides too high. LEDs have been too liberally scattered across the front end.

Inside, however, a return to a more conventional layout – more horizontal, less vertical – has caused the 2015 Sonata to seem quite a bit more Genesis-like. Regardless of equipment levels, and despite the fact that the current Elantra is no poor car, the outgoing Sonata always felt more or less like an Elantra Plus, particularly inside. Meanwhile, the current Accord comes across as much more than one single step upmarket from the Civic. With improved material quality and a more modern design, the Sonata is now class-competitive inside.

In terms of the simplicity of its controls and its overall intuitiveness, I’d argue that the 2015 Sonata is class-leading. There’s no getting-to-know-you process with the latest Hyundai/Kia infotainment units, and in this case, there’s no difficulty reaching across to the most distant buttons, either, as the whole centre panel is canted nicely toward the driver.

Unfortunately, the softness of the exterior design has been matched by a softening of the Sonata’s suspension. On the plus side, this pays dividends in ride quality, which is excellent. 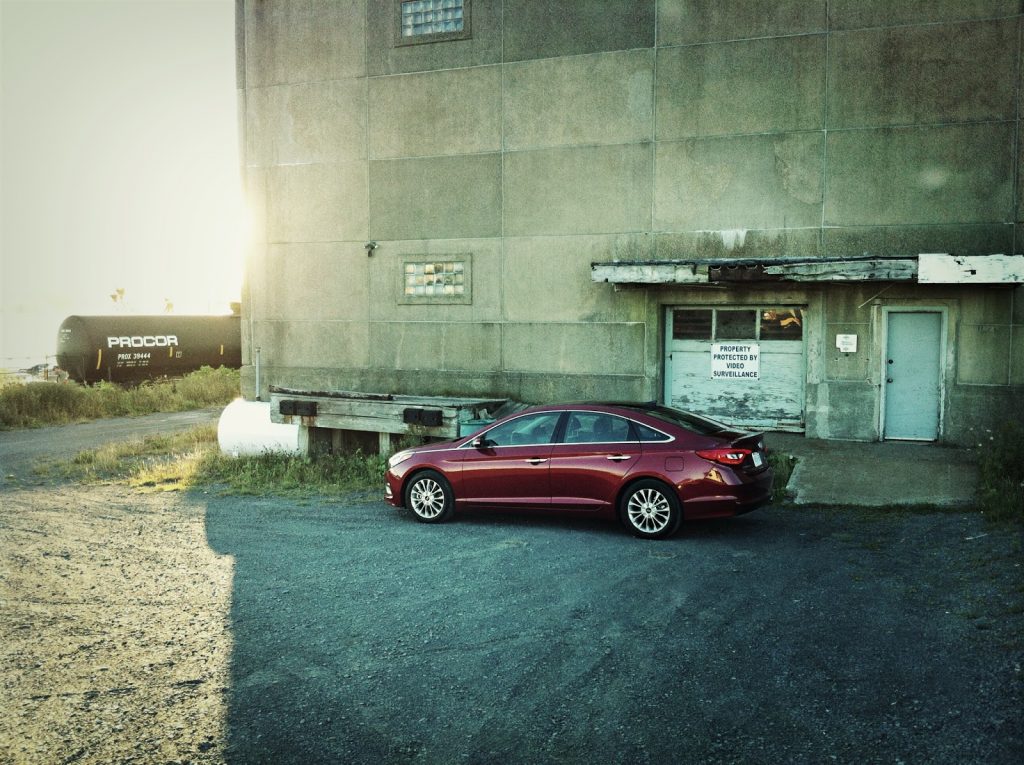 Compared with the previous Sonata, the most notable improvement in ride quality is out back. But the Sonata lacks the edge of the Mazda 6, the firmness of the Honda Accord, and the European undertones of the Ford Fusion, which quite artfully balances ride quality with a degree of athleticism. The Sonata’s three drive modes present slight differences, with Eco definitely being eco-minded in its throttle mapping and shift strategy, and Sport clearly generating more steering weight, but none of the modes seriously alters the intentions of the car.

Not for a minute am I suggesting that this emphasis on total comfort isn’t what buyers want, only that Hyundai’s successful drive to improve the Sonata’s suspension calibration could have been executed with more of a blend.

Then again, we spent our week with a Sonata Limited, a very well-equipped car, but one that was fitted with conservative Kumho P215/55R/17s. Riding on the Sport’s 235/45R18s, with its slightly different steering setup (rack-mounted, rather than column-mounted electric power assist) and altered suspension, the Sport 2.0T could produce rather different on-road character traits. 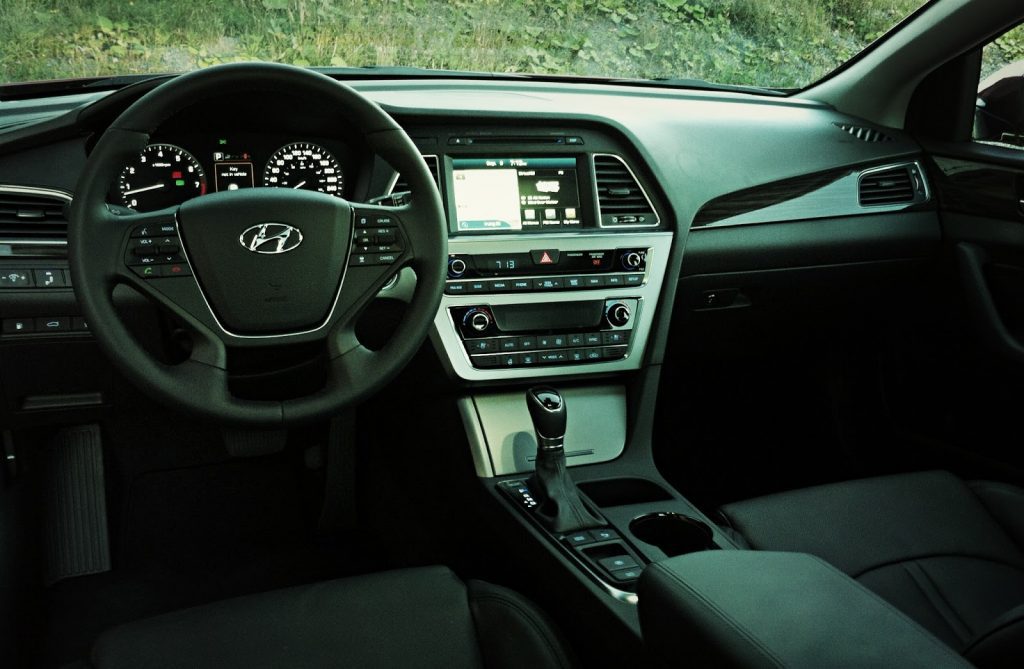 Limited trim Sonatas start at $34,817 (freight included), and bring to the Sonata’s equipment portfolio adaptive cruise control, lane departure warning, premium Infinity audio, cooled leather seating, and a host of other doodads. The aforementioned turbocharged 2.0L four-cylinder adds 60 horsepower to the base Sonata’s 185; torque is upgraded from 178 lb-ft to 260.

All these numbers are lower than they were just one model year ago, and lower than the kind of mind-boggling V6 numbers you’ll find in, for instance, the Chrysler 200. In the 2.4L, however, torque thankfully comes on stream early, at just 4000 rpm, and the Sonata therefore doesn’t feel slow. The 2.4L does become too buzzy at high rpm, and it runs out of gumption as revs rise. Thus, if you want care to acquire turbocharged 2.0L powerplant, Canadian pricing starts at a more affordable $32,817. $36,617 Ultimate 2.0Ts are Limited-like, but with the extra power. (Moving up from Sport and Sport Tech to Sport 2.0T costs just $2600 and $800, respectively.) 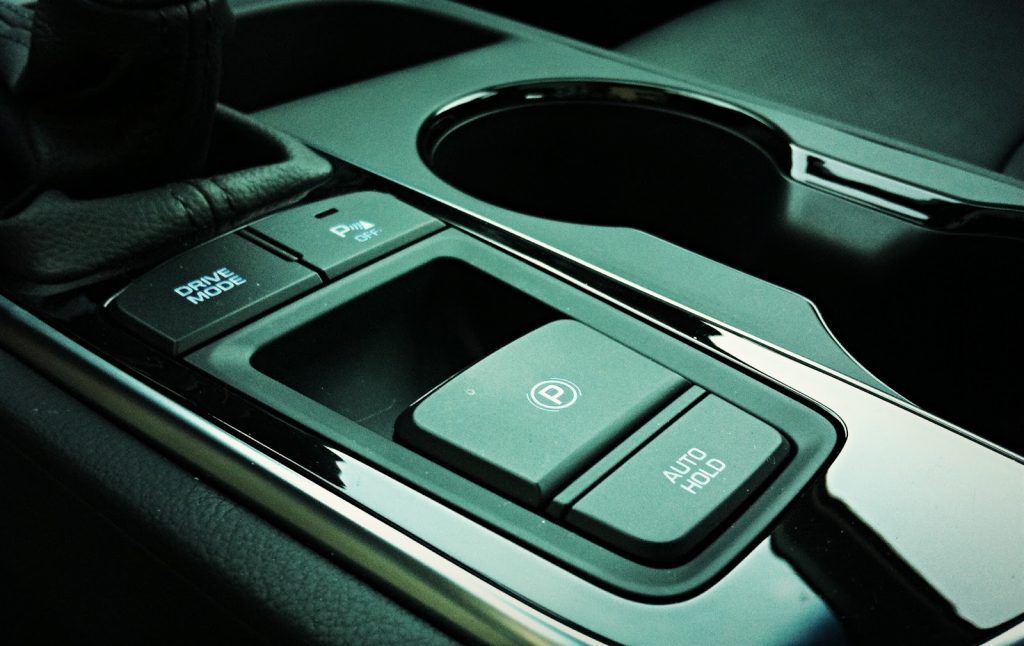 That’s a lot of car for the money, particularly now that the Sonata feels as nicely assembled inside (with materials of similar – if not better – quality) as the segment’s top sellers.

Love it or hate it, the outgoing Sonata was a car which, stylistically speaking, stood out from the midsize pack. Any hope that Hyundai would once again move the game forward on the design front has most certainly been lost.

Yet no one specific individual, save for the midsize sedan buyer himself, is the final arbiter on the success of Hyundai’s exterior revamp. Is this new 2015 Sonata half as intriguing a proposition as the old model was in its first model year? Probably not, at least not in the dark recesses of my subjective mind. 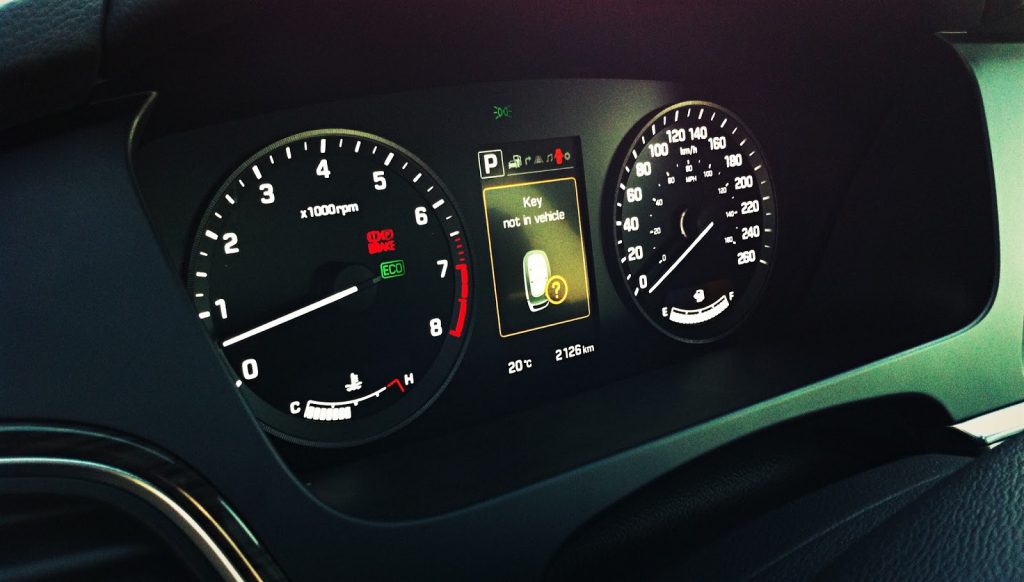 But is it twice as appealing on purely objective terms? Quite possibly, with improved all-around dynamics, ride quality that’ll shame most premium cars, an enhanced cabin, and observed fuel economy in mixed driving of 7.6 L/100km.

In this transition year for the Sonata, its Canadian sales tumbled 36% in the first half of 2014. More recently, Sonata sales jumped 42% in July, when it was Canada’s top-selling midsize car, and volume more than doubled in August. At that rate, because Hyundai appears to be giving the people what the people’s spreadsheets want, the Sonata would be back on track to achieve in excess of 2011’s record-setting Canadian sales pace.