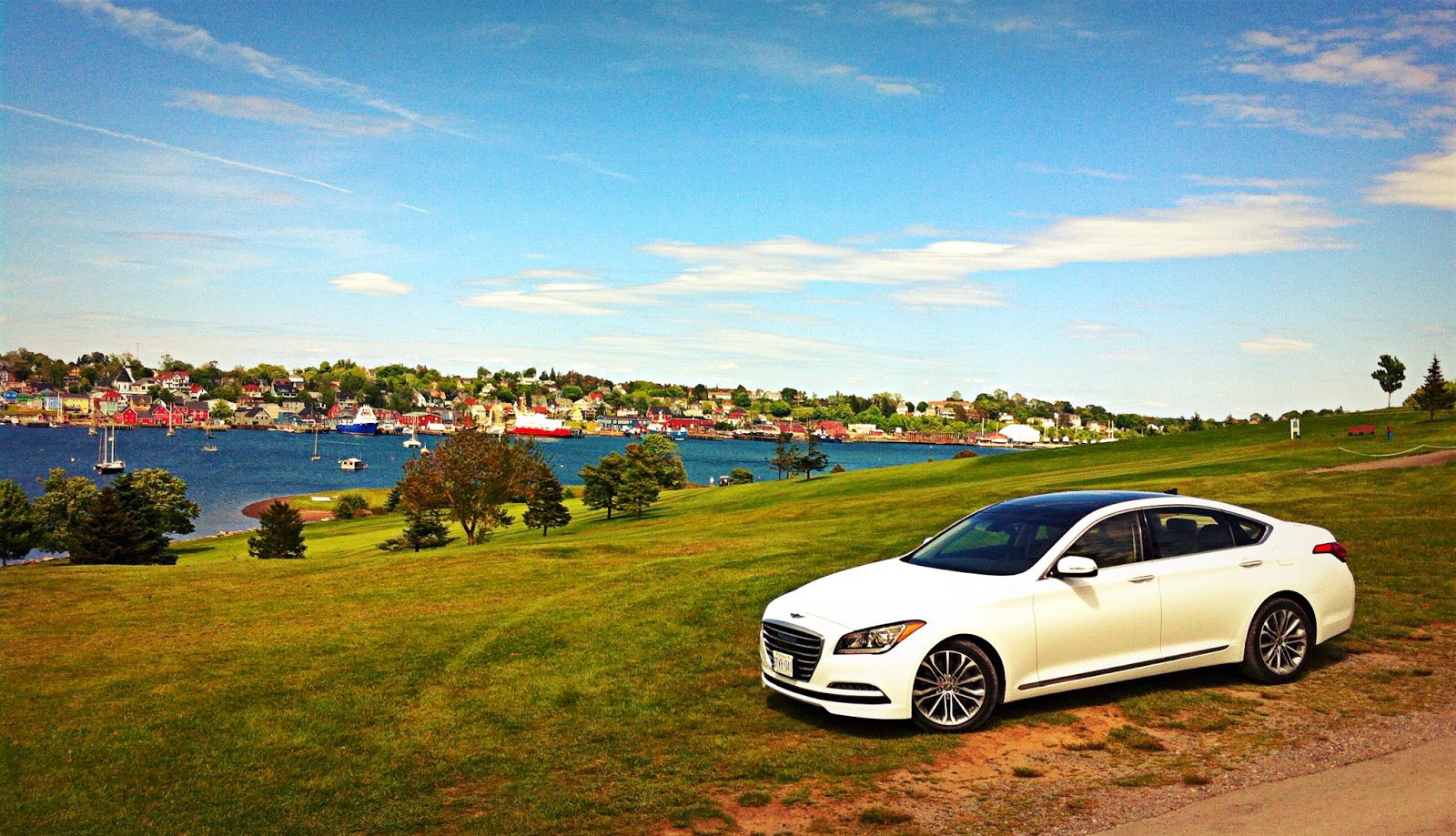 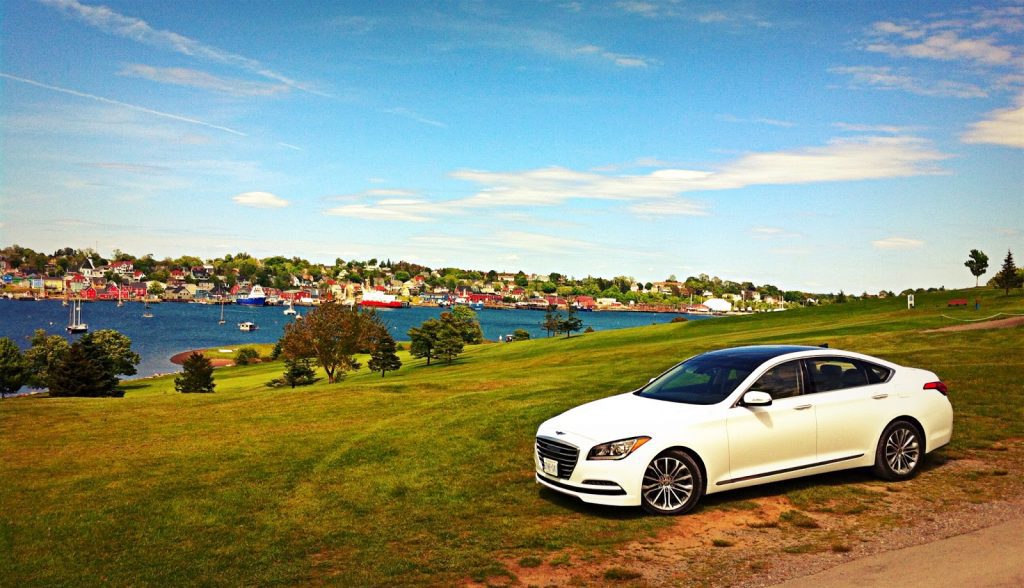 This is Canada. The harsh, Atlantic coastline of Canada. Ice forms first underneath the snow, and then on top of it. Drifts build up on main roads. Plows pile up snow that immobilizes the residents of our little cul-de-sac, and then once that’s clear, our driveways.

Rear-wheel-drive performance cars are parked in storage for five months, maybe more. Parents avoid leather seating when buying a new car to avoid the ensuing frostbitten bums of their offspring.

Okay, maybe that last one isn’t true. Or maybe it is, while not on the relatively mild coastline of Nova Scotia, perhaps elsewhere in this vast nation. Regardless, on this, the second day of summer, having made our way through a cool but often sunny spring, it’s difficult to cultivate any great level of contemplation regarding the benefits of all-wheel-drive.

I spent 300 kilometres in the new Hyundai Genesis sedan over the last week, driving to Lunenburg and back; visiting the Seaport Farmers’ Market in downtown Halifax; loading a stroller into the power-operated trunk (which never once opened on its own as per Hyundai’s Smart Trunk directions.) We made it up the very steep Kaulbach Street to the very ornate Lunenburg Academy without getting stuck. I made my way home through Halifax’s notorious rush-hour headache that is the Windsor Street Exchange and managed to maintain traction. Never once was the Genesis’ cabin in danger of freezing our fingers.

But this one thing I know: winter will come. And for 2015, Hyundai Canada has decided that all Genesis sedans, even the V8-engined Genesis sedans that sends all its power to the rear wheels all the time in the United States, will feature all-wheel-drive as standard equipment. Yes, you’ll still need winter tires if you’re going to get back down Kaulbach Street in Lunenburg, one of Canada’s 17 UNESCO World Heritage sites, one of three in Nova Scotia. 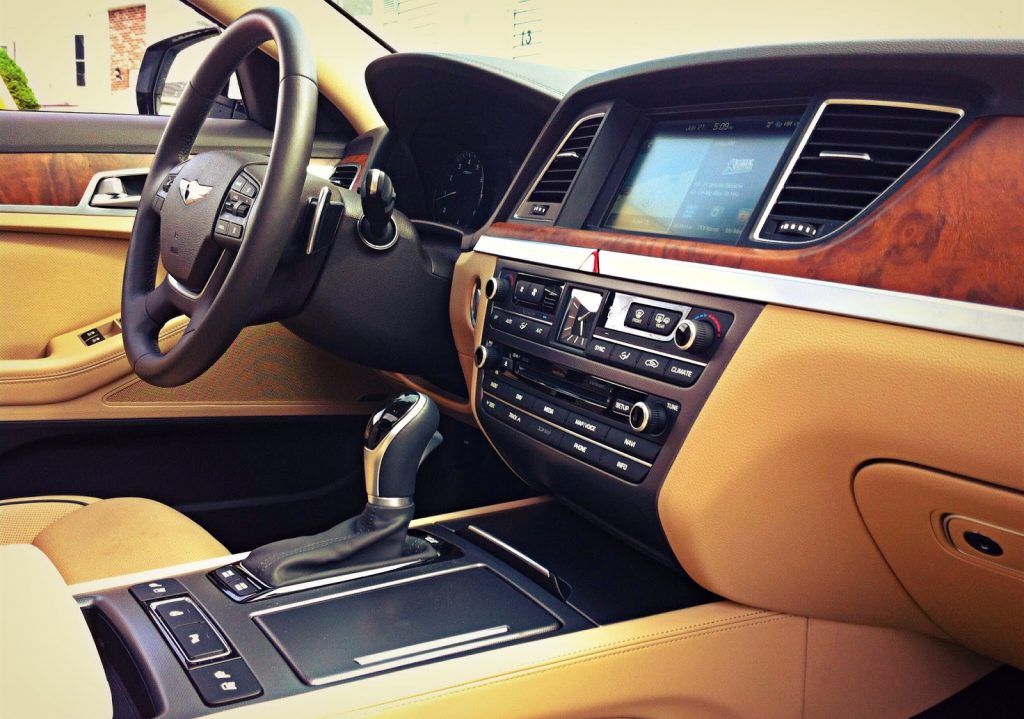 Yet, there’s suddenly no need to assume that the only way to make it through a Canadian winter with a properly large and luxurious sedan is with a car from Audi, BMW, Cadillac, Jaguar, Lexus, or Mercedes-Benz.

As a result of the transition Hyundai has made away from rear-wheel-drive, you’ll hear a lot about the system in the coming months. That’s too bad in a way, because the Genesis is deserving of attention for so many other reasons, not the least of which are the car’s improved dynamics, its higher quality cabin, and its persistent value quotient. 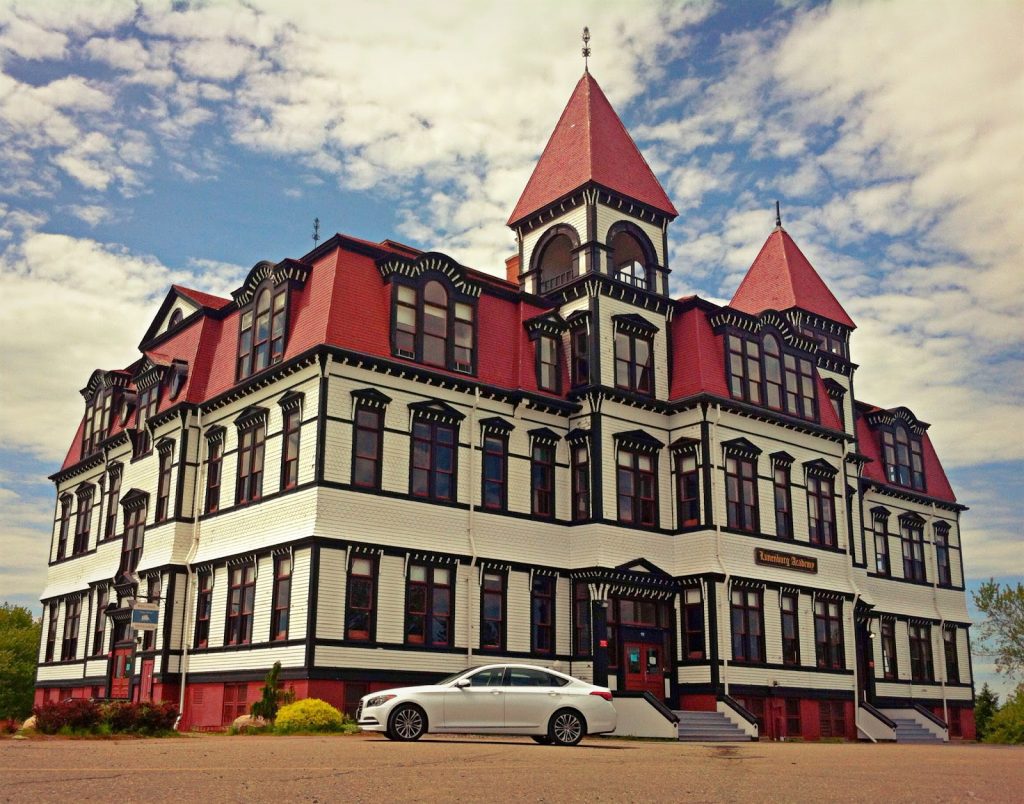 Its all-wheel-drive nature now just places the Genesis on a level playing field with the vast majority of its potential rivals. Aside from the HTRAC badging, it’s not as though all-wheel-drive impacts the way Hyundai’s second Genesis sedan looks.

It’s an eye-catching car with that massive grille, the planted stance, and the long hood/short deck layout that so capably produces a response in the performance-minded corners of our brains. The Genesis may be slightly anonymous when viewed from the rear, but that’s not the overall sense one gets from the new design, a design which makes the first Genesis sedan seem very outdated.

The individual consumer is the only judge that matters; my opinion matters little, if at all. I certainly couldn’t help noticing the number of Audi A4-driving under-40s who stared somewhat longingly at this big white Genesis over the course of our time with the car, if that’s any indication of how it will be viewed by some of the target buyers.

And big it most definitely is. (Length is virtually identical to the old Genesis, but the wheelbase has been stretched by three inches.) It’s more than four inches longer than a Mercedes-Benz E-Class, nearly a foot longer than an Audi A4, and 17 inches longer than Hyundai’s own Elantra. It’s therefore not at all confined inside, although some passengers did complain that the seat cushion was too low or the floor too high. At 433 litres, the Genesis’ trunk is by no means small, but it doesn’t come close to measuring up to a car like Chevrolet’s latest Impala, a longer car, with its 532-litre trunk.

Nothing would be more disappointing in a $55,000 car than a lack of comfort. There was no such dearth here, with a powered (two-mode memory) driver’s seat that extended for thigh support, puffed up for side support, and offered multi-position lumbar support. Lanky types will find that there’s still not enough side bolstering – the seats are slightly Americanized – but perforated, heated, and cooled Napa leather chairs tend to erase many a complaint. 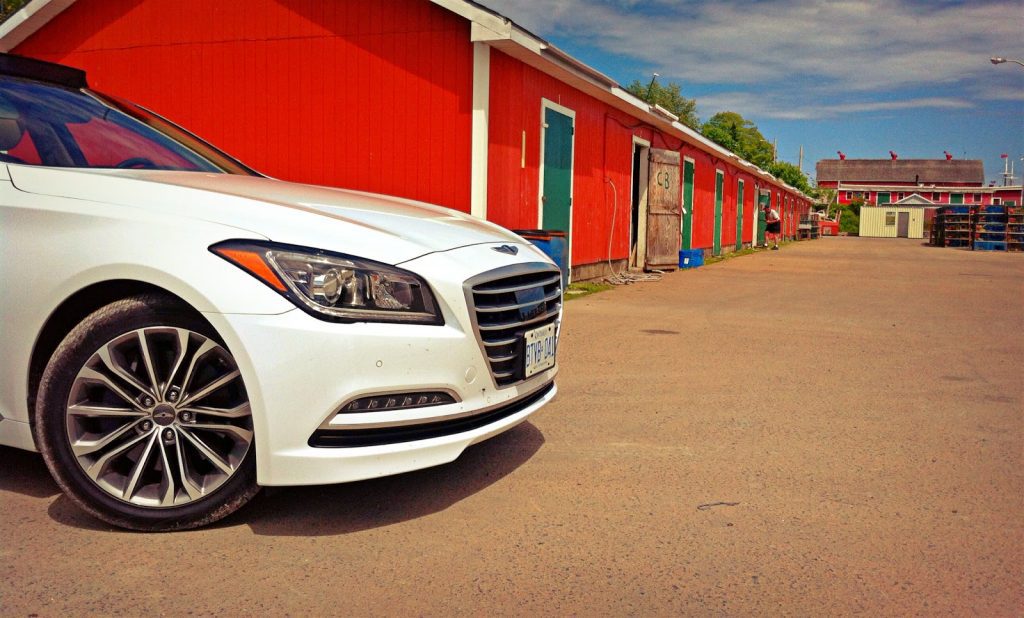 It’s becoming very common to see absurdly well-equipped cars at sub-$30K price points, like the Nissan Versa Note with its Around View Monitor at $20,720 and the $28,660 Kia Soul we tested last week with navigation, cooled seating, and a panoramic glass roof. So-called luxury cars like the Genesis are forced to separate themselves with higher-grade materials and a full slate of safety features. 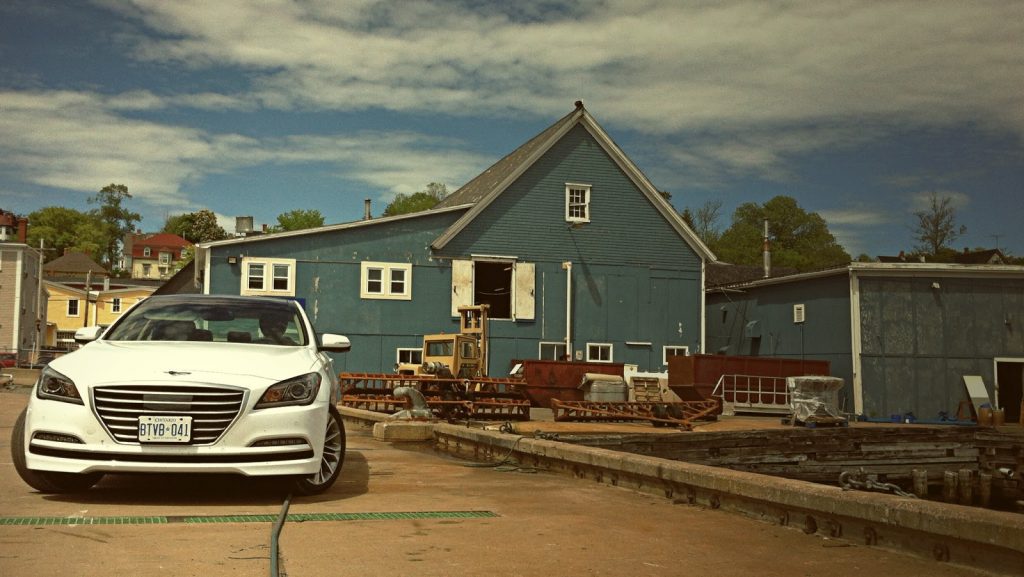 Hyundai goes heavy with slabs of wood across the dash and soft surfaces in lots of places you won’t touch, and many which your elbows will. Nothing shouts, “Downmarket!” here; everything suggests a price point of at least $50,000.

Everything, that is, except the intuitive touchscreen and the accompanying controls that reside beneath it. Aren’t luxury cars supposed to be complicated? Am I supposed to know how to turn on the air conditioning, select the mode, and set a temperature without consulting the manual? Should I be able to set up the Bluetooth connection, call up a satellite radio station, change the drive mode to Sport, turn off the LDWS, and roll up the power rear sunshade without assistance from a 17-year-old YouTube techy? Not in most of the Genesis’ rivals, I’m not. If simplicity and serenity can equal luxury, if a general lack of convoluted adornment corresponds to opulence, then the 2015 Genesis is both luxurious and opulent.

Luxurious and opulent, but not an outright sports sedan. With a curb weight driven up to 4295 pounds by all-wheel-drive and this equipment-laden Technology trim level, a comfort-minded 8-speed automatic, and 13 feet of agility-restricting length, it’s better that the Genesis focuses on ride quality and isolation rather than backroad-baiting and corner carving. That focus has resulted in a car that ignores road imperfections of all kinds, reduces wind and road noise to a minimum, and kills off all potential vibration before it reaches the cabin through any touch point.

Yet it’s here that Hyundai – with help from Lotus, yes, that Lotus – has made such a marked improvement in the Genesis, by balancing that focus on comfort with doses of steering accuracy, composed handling, and all-around road-hugging. In the real world, where local roads suck, where track days are better spent in a Miata, where your passengers don’t want to attack an off-ramp like it’s Eau Rouge at Spa-Francorchamps while listening to As It Happens on the way home from chicken and ribs at Swiss Chalet, balance is beneficial. Some feel and interactivity would be nice, but you won’t find much of that in a 5-Series, let alone an E-Class. It was plenty good enough for us to take the long way home from Lunenburg, past Mahone Bay’s high-class eateries and its trio of churches. 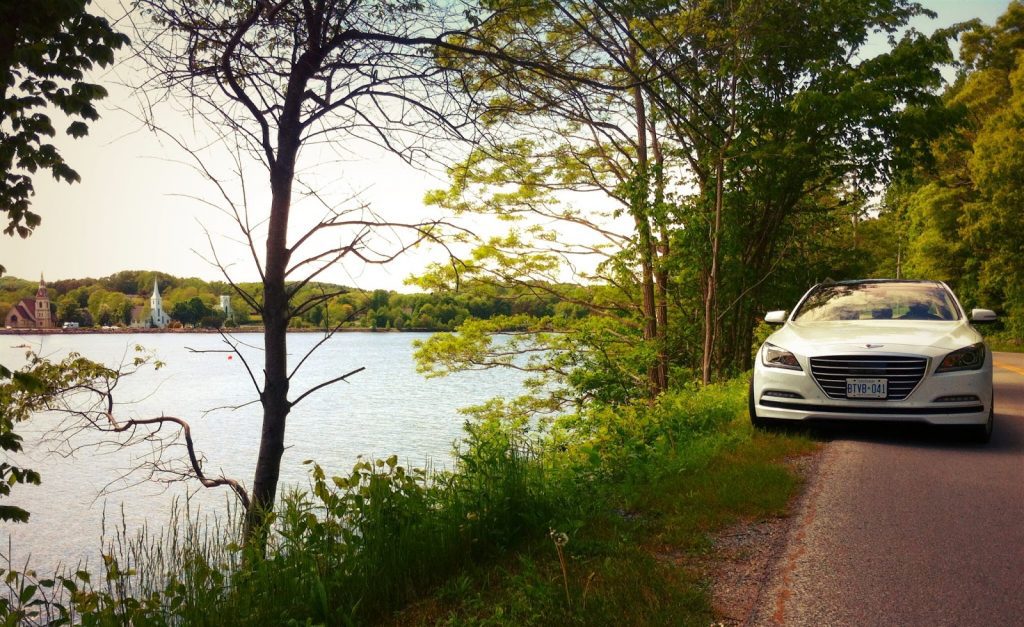 “But it’s a BMW,” right? The buyer who can’t help but differentiate by the superiority of a brand’s logo, its heritage, or its other cars was a buyer Hyundai didn’t expect to secure in the first place. The Genesis accomplishes two things for Hyundai. First, automakers, including Hyundai, can make a lot of money selling expensive cars as the profit margins are significantly elevated. Second, and perhaps of greater importance, the Genesis is inclined to reinforce any positive impressions possessed by the potential buyers of Hyundai’s lesser vehicles.

Aided by its comparatively low pricing, the Genesis isn’t a top seller, nor has it been a flop. In Canada, where sales of the distinct Genesis and Genesis Coupe are separated, sedan sales peaked in 2012 and then slid 12% in 2013, the second-highest-volume year since the Genesis arrived in 2008.

The EPA says a V8-engined, all-wheel-drive Mercedes-Benz E550 will use 10% less fuel than the V6-powered Genesis, a car that could stand to drink less. Fortunately the bulk of our mileage was spent on a low-speed highway, and fuel economy was better than expected. Even as a guzzler, it’s hard to see how this new 2015 Genesis sedan won’t be more popular than the first-generation car, unless Canada’s shrinking passenger car market has its way with premium vehicles as it has with conventional midsize cars, many of which don’t offer all-wheel-drive. 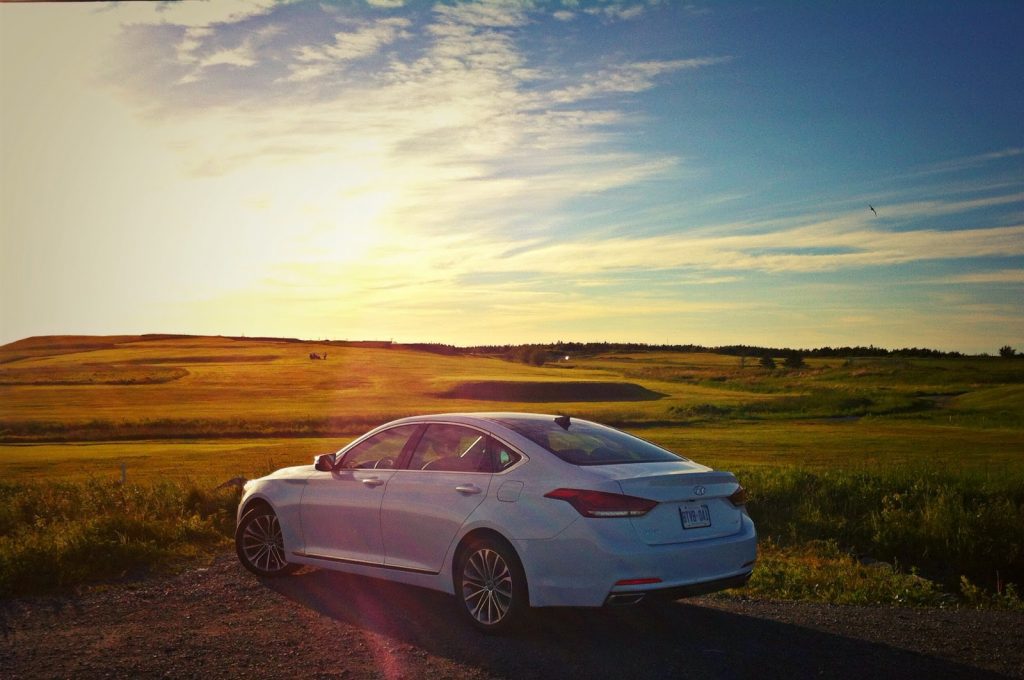