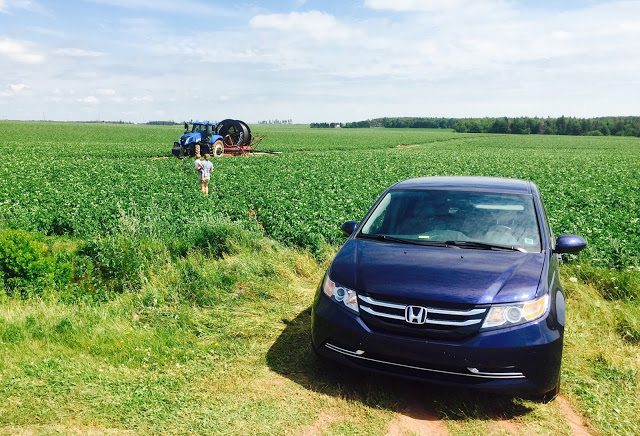 14 months after driving our 2015 Honda Odyssey EX home to GCBC Towers in Eastern Passage, Nova Scotia, from Centennial Honda in Summerside, Prince Edward Island, we are still big fans of our van.

We have, however, seen our van spend large chunks of three separate days inside the garage at Portland Street Honda in Dartmouth, Nova Scotia, for unscheduled maintenance.

This time, lubrication was not enough to resolve the issue.

On Thursday, August 18, we delivered our Odyssey to Portland Street Honda early in the morning complaining of groaning and flexing sounds coming from the front suspension.

A brief drive with a service technician was more than long enough for the technician to identify the source.

A Honda Canada service bulletin (B-1-16) related to just this noise prescribed a remedy entailing greater lubrication around the front bump stops.

But we were told later that day that Portland Street Honda had followed the procedure to no avail; we could come and pick up our van. (Parts to actually fix the problem wouldn’t be available until Friday the 19th, but we needed our van that night.)

Once again, we delivered our Odyssey back to Portland Street Honda the next day for the replacement of the front struts – with only 17,000 kilometers on the odometer – and an alignment.

The good news? The service experience was a positive one. Our van’s front suspension no longer sounds awful when traversing speed bumps.

In fact, we believe ride quality has improved, as well, since the leaking struts are done and gone.

Naturally, we’re not pleased. Of course the costs have all been covered under warranty. Other than fuel, tire changeovers, and insurance, there have been no extra costs related to our 2015 Honda Odyssey EX. But unscheduled maintenance is a pain in the schedule. At three days in 14 months, we have yet to be terribly inconvenienced. But we hope the issues stop soon. We like our van far too much – and have too much interest in eventually replacing it with another Odyssey – to lose faith in our current Odyssey’s durability.