Yet these vehicles remain relevant in the U.S. automotive landscape. GM, the best-selling manufacturer in the U.S., generated 8.7% of its volume with six full-size SUV nameplates in 2014, up from 7.7% in 2013. At this point, they’re not vehicles built exclusively for the rich and famous, the Secret Service, owners of big boats and RVs, and families with five children.

How well would one version fare when GM Canada sent a CAD $84,695 copy for a one-week stay to a Canadian family with one child, no security team, no Jayco, no riches, and no fame? Quite well. But the 2015 GMC Yukon Denali did a better job of making the case for another GM vehicle than it did for itself.

I AM JUST A POOR BOY
In Canada, the regular-wheelbase 4WD Yukon Denali starts at $75,290, an $18,345 jump from the cost of a base 4WD Yukon. Our Yukon Denali included a $5000 touring package: sunroof, rear seat DVD, head-up display, enhanced security package, and 20-inch chrome wheels. Those wheels were swapped out for $545 22-inch alloys. Power retractable running boards added $1920; adaptive cruise control rang in at $1780. 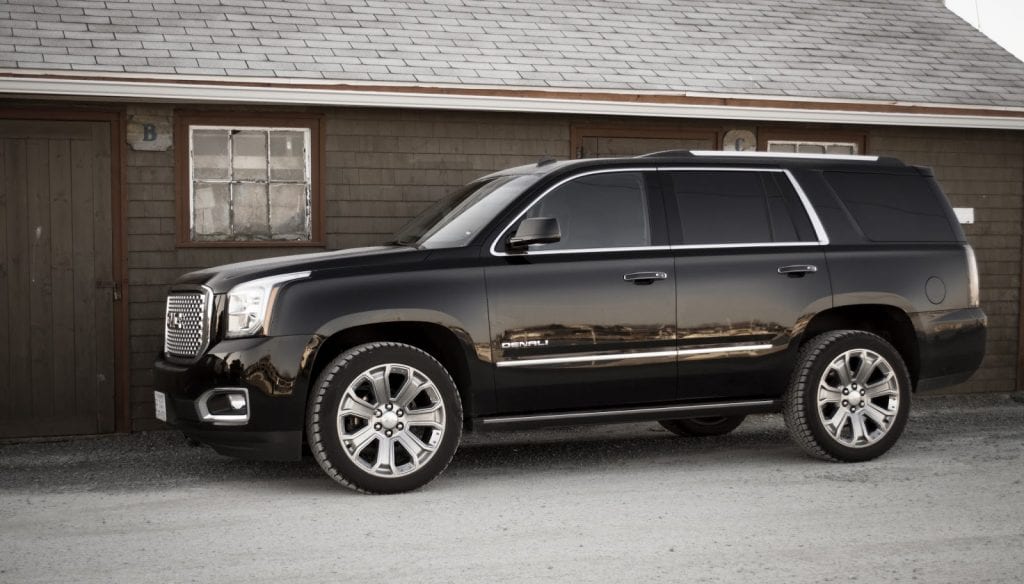 I SEEM TO LEAN ON OLD FAMILIAR WAYS
The Denali’s heated steering wheel and three-stage heated seats (which can warm both buns and backs or buns only) were more than a little appreciated, as was the remote start, as our winter kicked into high gear after Christmas. The two front seats are also cooled, a feature I did not dare test when the windchill fell below -20°C. Warmed or cooled or not, front seat comfort is where full-size SUVs excel. Space is abundant, storage is plentiful, an ideal seating position is easy to find, there’s a significant amount of bolstering for broader folk, and no control requires a long reach.

But let’s face it, this interior doesn’t scream money. As the guy who didn’t pay big bucks to actually own this Yukon, it wasn’t hard for me to enjoy the simplicity of GMC’s IntelliLink (certainly not after a week with Acura’s convoluted system) and the vehicle’s high feature load.

Still, any time I was left waiting in the Denali, I remembered other interiors at this price point and was left balancing the lower-class ambience of the Denali’s interior with, “But I can tow 8100 pounds and the Audi A8 can’t!”

Making matters worse, standard-wheelbase models just aren’t that roomy in the back. Second row passengers have far less knee room than you’d expect in a vehicle that’s 17-feet long. (Key dimensions: 204 inches long; 80 inches wide; and 74 inches tall on a 116-inch wheelbase.) Third row space would be decent if not for a floor so high that it jacks up knees to chin height. Standard-wheelbase, full-size SUVs continue to have an issue with cargo space behind the third row, as well. 433 litres is the official figure, but making the most of that space requires artful placement of very slim luggage. The 1631 litres of space behind the second row is box-shaped, but the load height has been elevated to make a flat floor possible. This reduces overall space and makes life a pain for dogs who don’t have extensive agility training.

SLOW DOWN, YOU MOVE TOO FAST
Criticism that’s been levied against lesser versions of GM’s latest K2XX SUV platform is dismissed by the Denali’s magnetic ride control. Not only does the Yukon Denali ignore the worst pavement, its cabin is also very quiet. Pair that smooth silence with a monstrous V8 and speed is generated with great haste. Fortunately, confidence-inspiring brakes, good visibility, and composed handling cause the speeds produced by the 6.2L V8 to seem far more normal than they should for a vehicle which weighs, according to GM, 5784 pounds.

Sure, there’s a truck-like momentary lapse in the steering on and just off centre, but modern pickup trucks (and offshoots such as this Yukon) continue to impress with deftness that belies their size. Car & Driver says the Yukon Denali accelerates to 60 mph in 5.5 seconds, a shocking figure which will likely be reduced by a smarter 8-speed automatic. This outgoing 6-speed never shifts poorly, but it doesn’t manifest the intelligence of newer automatics.

Officially, the Yukon Denali’s forthcoming 8-speed doesn’t make a huge fuel economy difference, decreasing the 6.2L’s city consumption from 16.2 L/100km to 15.9. (The real-world gains are surely more meaningful.) In our 6-speed tester, we saw 18.5 L/100km, a figure exacerbated by winter rolling stock (285/45R22 Bridgestone Blizzaks), cold weather, excessive idling, and city driving. The 4WD system was left in auto mode for the duration of its stay, save for a handful of RWD moments at the end of our cul-de-sac after a light snowfall. You can imagine why.

GOING TO THE CANDIDATES’ DEBATE
At this price point, there are countless ways to spend your money, not just in the wide-ranging automotive spectrum but in the SUV world and even the GM portfolio.

The Escalade’s CUE will improve upon the Denali’s interior style quotient, if not its usability. There are smaller vehicles which do a better job of squeezing in seven occupants. Although the Yukon Denali handles well for what it is, there are genuine track-capable utility vehicles in existence. I couldn’t help but value the vehicle’s surplus all-around capability, however, and the GMC’s knack for coming across as a pleasant vehicle to live with despite being built to do rugged things conventional crossovers can’t.

As a three-row vehicle, it comes up short. As a luxury contender, I’m not sure it lives up to its MSRP. Nevertheless, the Yukon Denali convinces me that GM is at its best when GM is building their most profitable vehicles. It also convinces me that I’d prefer to pay less for more vehicle. Thankfully, that vehicle exists. It’s called the Chevrolet Suburban.