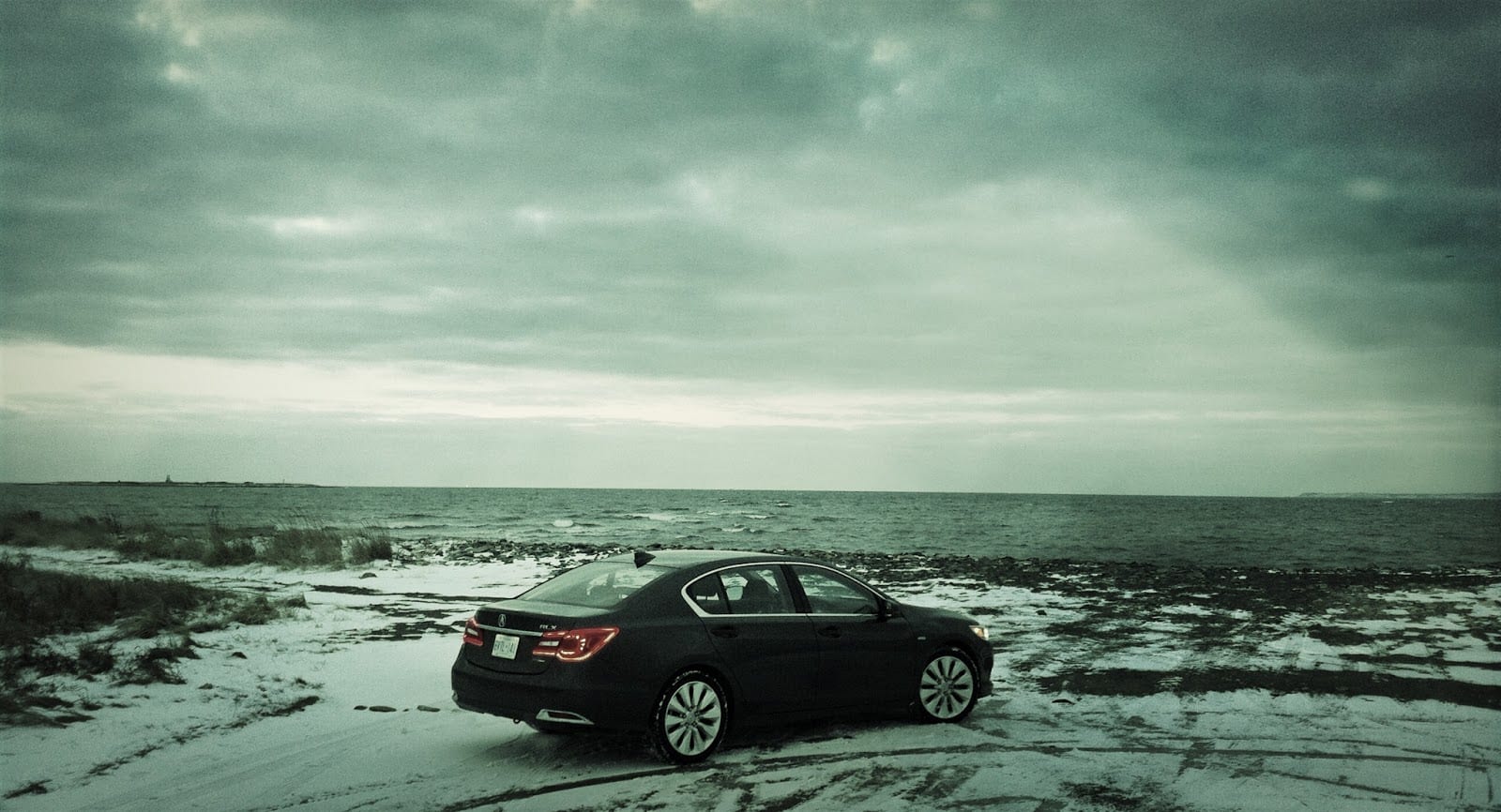 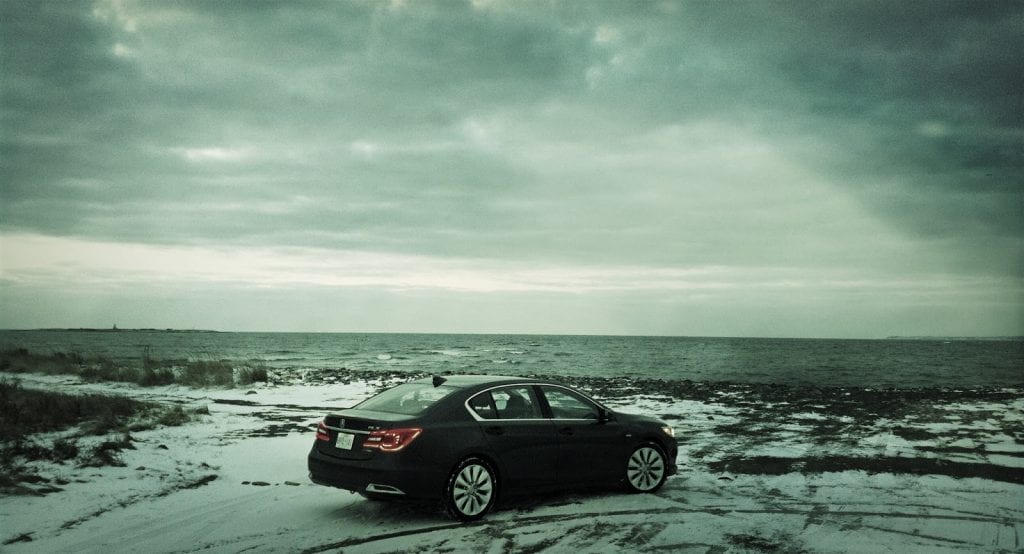 Everything you see here is painfully normal. Much of what you can’t see is charmingly whimsical.

Turning the easily forgotten and forgettable Acura RLX into an RLX Sport Hybrid involves the employment of a cooperative seven-speed dual-clutch transmission, a front-mounted electric motor, and an unorthodox all-wheel-drive system that takes advantage of two more electric motors, one at each rear wheel.

It’s unlikely that you’re entranced by the RLX’s conservative exterior or in love with its dual-screen infotainment unit or in favour of the way it slowly engages reverse or thrilled with its shrunken trunk and cramped middle seating position. But the RLX Sport Hybrid showcases Honda engineering prowess, and it does so in a way that’s not emulated by any other Honda product. The RLX Sport Hybrid doesn’t feature the new eight and nine-speed transmissions from the TLX, this is not a de-tuned 2016 NSX powertrain, and it’s not hiding the unique transmission-less hybrid kit fitted to the latest Accord Hybrid. This is a whole ‘nuther thing. This is Honda being Honda.

However, it’s clear that from a marketplace perspective, this just isn’t the way to do business. See, to make a point, we’re prone to saying things that don’t remotely correspond to reality: “There ain’t nobody buying Dodge Darts.” Well, actually, there are 730 Dart buyers in Canada every month. 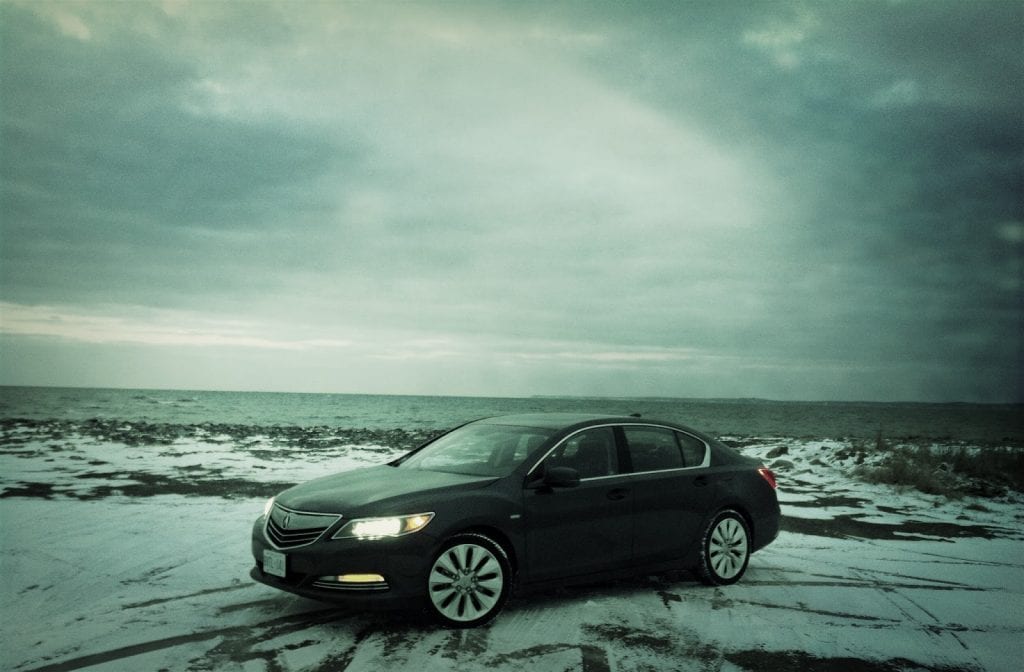 In the case of the RLX lineup, the same statement lands much closer to the truth. Chronically unpopular, the RLX’s 31% year-over-year Canadian sales increase translated to only 20 monthly sales in 2014. Those are BMW i3-like numbers from a car which competes in a category where even mid-pack cars like the Audi A6 generate more than 90 sales per month.

Of course, it could be argued that the RLX Sport Hybrid’s exclusivity adds a cool factor to the equation. It’s a rare version of a rejected car that observers won’t understand. (Or likely even notice.)

The rear electric motors add power to an already swift car and provide a form of four-wheel steering that causes the RLX to be tossed understeer-free into a corner with immediacy. All-wheel-drive cars which suffer from torque steer, like this Sport Hybrid, engender a measure of uneasiness in my RWD-loving soul – torque steer is for Saturn Ion Red Lines, not refined luxury sedans – and the sensation is worsened because the RLX isn’t a bastion of total traction in the snow. Nevertheless, with judicious use of heavy throttle, the RLX Sport Hybrid reveals itself to be a capable back-road burner, allowing a surprising degree of extra throttle application as it makes its way through a corner, feeling more and more like a much smaller car than it is.

Brake feel isn’t as predictable as you’d like, something we’ve come to expect in most hybrids. And in the RLX Sport Hybrid, the lifeless steering is the usual tell-tale sign that, regardless of its tricks, you are still driving a 4354-pound car. Yet viewed as a large car with sporting credentials, the RLX offers quite a bit of fun when called upon to do so, just not the level of aggression one would encounter in, for example, the latest Cadillac CTS Vsport.

From a refinement perspective, the RLX is disarmingly quiet but not as serene on rough roads as you assumed a heavy car with a 112-inch wheelbase would be. Perhaps the low-profile Michelin X-Ice (245/40R19) winter rubber is to blame for the marginal loss of tranquility.

Compared with the TLX we reviewed at Christmastime, there’s greater tranquility inside the car, as the heated seats are controlled by a conventional button just ahead of the different-for-the-sake-of-difference shifter. Rather than operating the frustrating screens – the lower one with fingers; the higher one with controls mounted below the lower screen – to call up basic controls, the RLX allowed me to turn on the cold car and press a button with no waiting period for a computer to come to life. Ah, winter’s pleasures. 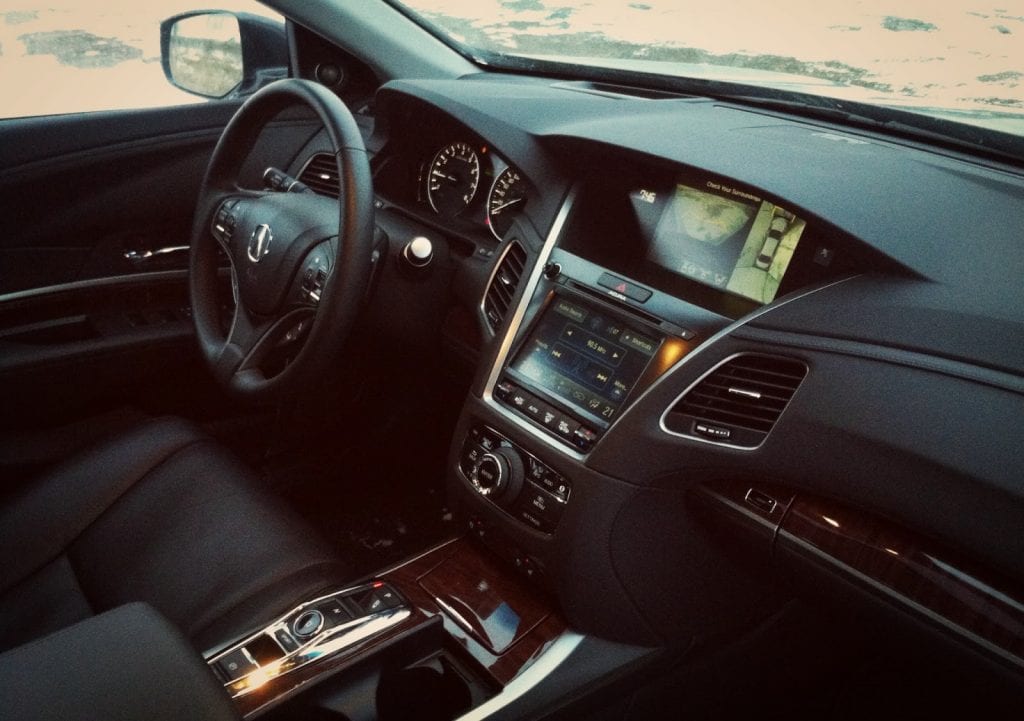 Even the driver who forgives the RLX its modern Acura dashboard layout won’t enjoy the benefits of big-car living. At 196.1 inches long, the RLX is only five inches shorter than a Chevrolet Impala; it’s six inches longer than Acura’s own TLX. But the rear seat is built for two, as the centre floor hump is nearly as high as the seat cushion itself, and the middle seat cushion is perched up too high above the outboard positions for any kind of comfort.

Window seat occupants are blessed with bountiful space, but the Sport Hybrid feels like a four-seater. The trunk, meanwhile, has been chopped down from the regular RLX’s decent 423 litres to a tiny 328 litres, 6% less than the capacity in the trunk of Acura’s small ILX sedan. Cross-country journey for five? No way. For four? Perhaps, but don’t pack too many extra pairs of underwear. 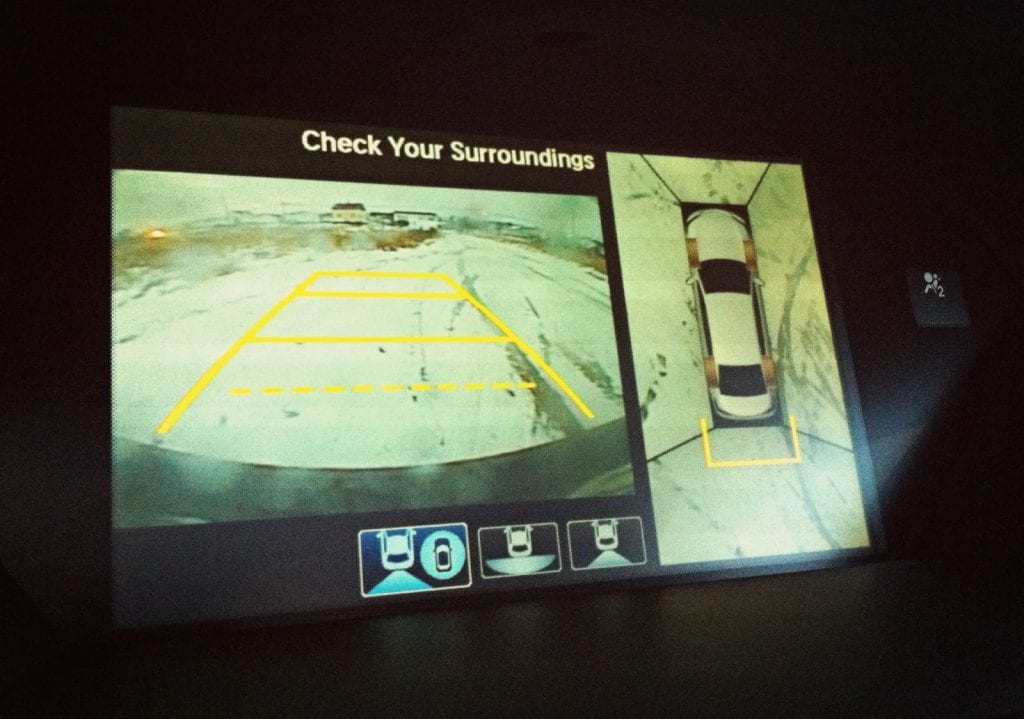 Of less importance to the well-heeled buyer of Acura’s most expensive current car (but surely of some interest to hybrid buyers?) was the disappointing mileage returned by our RLX Sport Hybrid tester over its week-long stay. The car, supplied to us by Honda Canada, is officially rated at 8.0 L/100km in the city and 7.5 L/100km on the highway. With bitterly cold weather, winter tires, and a mix of city/highway driving, we measured 10.8 mpg. Not bad for a genuinely quick car, but well below expectations.

With Acura’s disdain for actually designing its flagship sedan with some semblance of style being the worst of the RLX Sport Hybrid’s drawbacks, I progressively enjoyed driving the car more and more as the week wore on. But with supremely comfortable seats, 377 horsepower, keen turn-in inspired by the Integra Type-R, high equipment levels, and no questions from nosey neighbours who surely didn’t even notice the car parked in our driveway, why wouldn’t I? 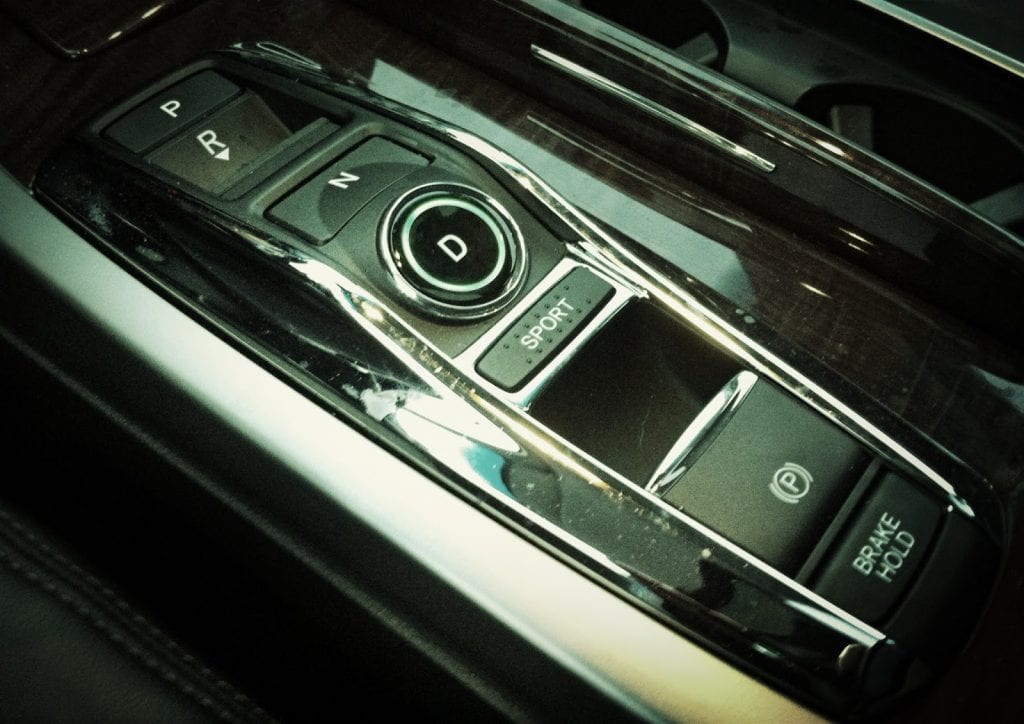 Then again, I didn’t pay the CAD $72,085 asking price, which is surely too much for a wallflower in a class full of attention grabbers. Acura needs to allow its designers to exercise their artistic talent the same way their R&D staff is permitted to concoct powertrain compositions. Marry the best of those two departments, especially if the car is truly capable of producing this much power with the stated fuel efficiency ratings, and they’d sell far more than a handful each month.

As it stands, there ain’t nobody buying this thing right now.