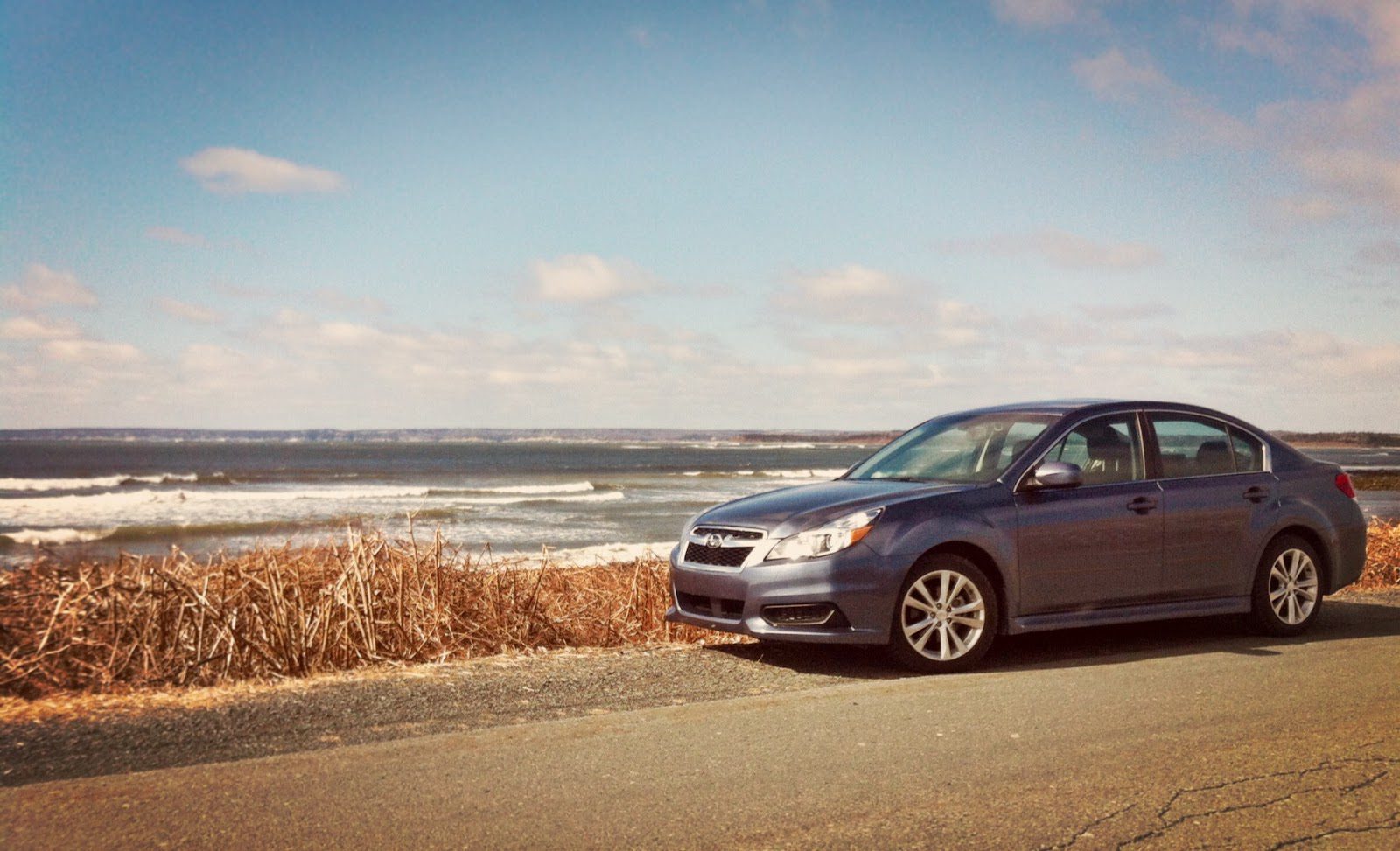 2014 Subaru Legacy 2.5i Limited Review – Not Completely Without Charm 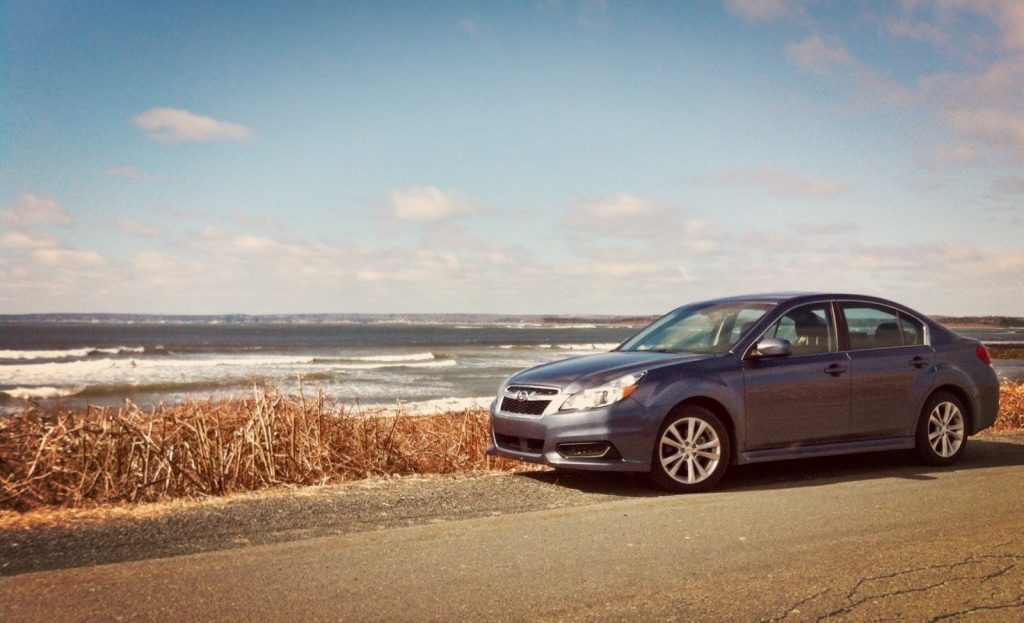 Forgettable design, an underwhelming engine, and a relatively undersized cabin have caused the outgoing version of the Subaru Legacy, tested here in MY2014 form, to be roundly ignored in North America’s midsize car market.

The fifth-generation Legacy feels like a car that dropped out of Lady Mary Crawley’s Finishing School a few months before graduation. It seems to have been under the misguided impression that midsize buyers value unique qualities like engaging dynamics and all-wheel-drive above. Silly Subaru.

Unfortunately, the Legacy’s focus on the kind of chassis setup that appeals to an auto enthusiast reviewer left little time for Subaru to concentrate on the traits desired by the practical midsize car consumer.

Subaru will attempt to cure many of these ills with the upcoming 2015 Legacy. It’ll be roomier. Subaru will again offer a powerful six-cylinder engine even as others flock to fours. It will be more fuel efficient. The trunk will be bigger. (The problem with the current Legacy’s trunk is more its shallow shape than its overall size.) They’ll have had more time to work on the Legacy’s continuously variable transmission; more time to eliminate the issues that sometimes make the Legacy seem like a car of the 90s, a major problem when so many of its direct rivals feel a lot like luxury cars of the 10s. The 2010s, not the 1910s.
But Subaru Canada didn’t deliver a 2015 Legacy to GCBC Towers last week. Besides, one thing Subaru hasn’t fixed with the 2015 model is the bland exterior. From the rear three quarter, this 2014 Legacy is probably the most anonymous midsize car available. Not enough of the car’s exterior will change for 2015. Why Subaru product planners punched themselves in the throat by labelling this sedan concept a Legacy, and thus leading us on, we’ll presumably never know. 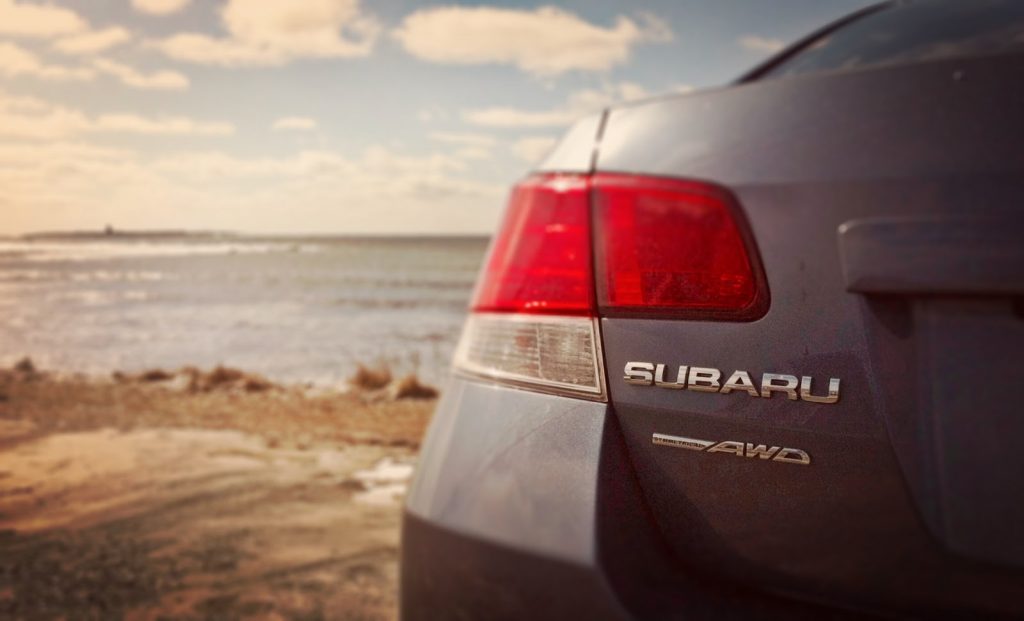 Yet, historically-speaking, bland design hasn’t hurt many top-selling midsize cars. (Beige Camry, any takers? 450,000? Great!) On the other hand, Canada’s favourite midsize car in 2013 and through the first two months of 2014 is the head-turning Ford Fusion. The Fusion is available with a range of powerplants, front or all-wheel-drive, and enough tech to make a “social media entrepreneur” uncomfortably unaware.

We know the 2014 Legacy is behind the times. (That might be why Subaru Canada has auto reviewers testing the car, so our upcoming reviews of the 2015 model will, they hope, remain in the context of of Subaru itself rather than the Legacy’ competitive set – Toyota did it with the last Corolla, too.) But to what extent does it lag?
It lags enough that Subaru realized the 2015 model will need a chassis that’s 59% stiffer and a body that’s 10% more aerodynamic. (Ed: this review previously noted the chassis was 43% stiffer.) It’ll need more sound deadening material between the carpet and its thicker floor. It’ll need an acoustic laminated windshield, liquid-filled engine mounts, and thicker panels in the toeboard, rear wheel apron, and inner fenders.

No wonder, as a lack of overall refinement is the sharpest thorn in the 2014 Legacy’s side. Wind noise around the A-pillars was more than a little disruptive. The almost siren-like whine and wail of the 2.5L/CVT tandem under acceleration was, to be frank, laughable.

At least in Limited trim, the Legacy’s interior looks really nice, but it’s important that the interior feels as nice as it looks. The Legacy’s interior does not. The infotainment unit was not designed by Apple, nor by any other company that wants its technology to do a lot of stuff while still being simple to use and nice to look at.

Subaru’s EyeSight system watches out for the rear end of cars with which you’re about to collide and also takes note of your proximity to lane lines. Because you have better things to do. EyeSight mistook the bright blue sky for the rear end of a car on one occasion as we headed up a steep slope into Lawrencetown. Its beeping was always too high-pitched and too constant. EyeSight, in its current iteration, is hypersensitive.

Brake feel is akin to stepping in an inch or two of muck before settling in mud. Subaru has made the throttle pedal very heavy, a great tactic for causing drivers to accelerate gently enough to find greater fuel efficiency. Even when you push through the weight, there simply isn’t a substantial amount of power to be found. 173 ponies? Seriously? If there are 173, they must not be well cared for. They huff and they puff but forward motivation is never plentiful, and the 2.5L’s inadequacy had me thinking that the extra weight of the all-wheel-drive system wasn’t worth it.

Then the roads improved, and the bends of Nova Scotia’s Route 207 were more closely acquainted with one another, and the pavement’s smoothness limited the impact of the Legacy’s slightly busy ride. Suddenly the Legacy didn’t feel too heavy at all. The steering is a speck lifeless on either side of centre, but turn in is still quite quick as the low-slung boxer engine brings the Legacy’s centre of gravity way down. Unforeseen changes of direction are thus welcomed by the Legacy. Had the weather caused traction issues for its front-wheel-drive rivals, the Legacy’s expert all-wheel-drive system would have been a big help.

The Legacy’s fun-to-drive nature is about so much more than just grip; how many more mph can be achieved in one car versus another around a skidpad. This Subaru seems to enjoy being hustled, with responsive steering and lots of wheel travel and little body roll. And even the CVT – which so often seems to be revving far too high in regular in-town circumstances – gets into a stride when the Legacy is forced to make time in an un-trafficked rural setting.
Alas, as a result of the excessive wind noise, my fellow occupants couldn’t hear me very well during this drive to the beaches on a Sunday afternoon. The Harman Kardon 9-speaker stereo seemed a bit lifeless but probably excels at volumes not safe for our four-month-old’s ears. The vast centre hump in the backseat wreaks havoc on overall space, space which isn’t easily accessed because of the small rear door openings. Knees, not just in back but up front too, are pointed skyward as they are in so many Subarus. 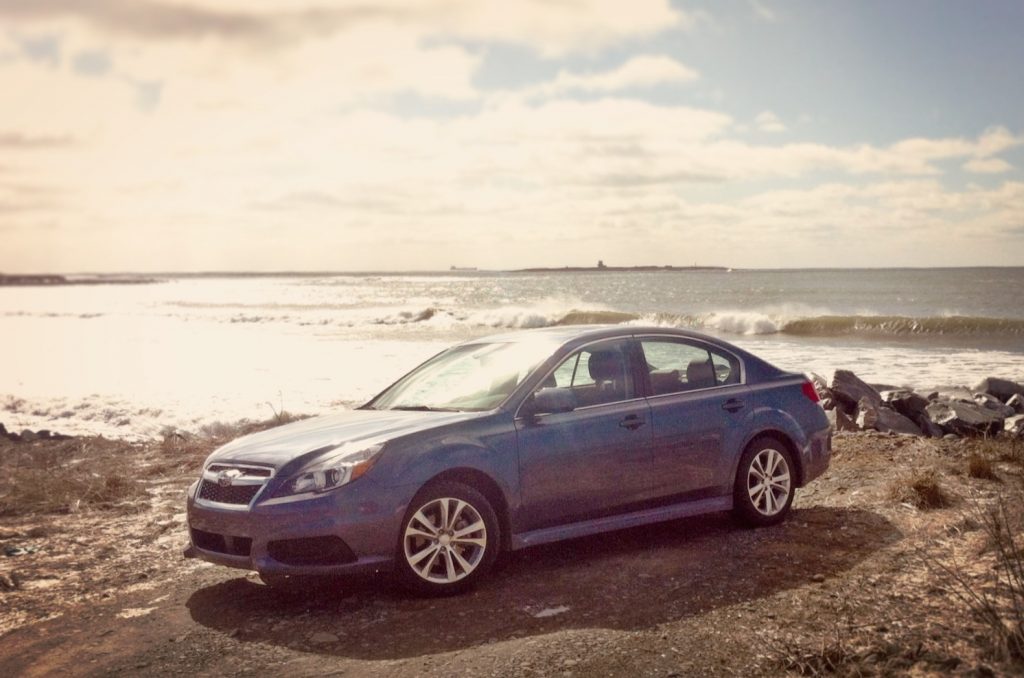 Easily charmed though I was by the Subaru’s knack for successfully attacking the rural roads I know best, it’s similarly easy for me, an obsessive tracker of automotive sales data, to remember that the midsize category’s best corner carvers are not among the segment’s top sellers. Canadian sales of the Mazda 6 have been plunging. In fact, they’re falling to ridiculous lows. And the 6 is highly regarded.

In the U.S. the Legacy is less popular than the Altima, Camry, Accord, Fusion, Malibu, 200, Optima, Sonata, Passat, Avenger, and that Mazda. The same group of cars easily outsold the Legacy in Canada last year, as well. Nissan positioned the first of its big Altimas as a sporty midsizer, but the current comfort-oriented Altima is the best-selling car in America right now.

So often, consumers get it wrong. Perhaps that’s because automakers don’t get the message across, or maybe it’s a result of a buyer’s preconceived notions getting in the way. In the case of this Legacy’s failure to take off while the Outback, Forester, and XV Crosstrek sell so well, it’s not difficult to see that backroad fun is completely counteracted by what comes across as both a boring and incomplete car.

It is fun to drive a midsize alternative that doesn’t feel as big as a barge, but inside, the Legacy doesn’t feel as vast as its contemporaries. The 2014 Legacy also feels wildly overpriced, as this 2.5i Limited with EyeSight comes within $1800 of Honda’s top-trim Accord Hybrid, a car which shames the Legacy in most aspects and can also be something of a joy to toss down a twisty road.

Subaru knows how to do better. They haven’t become one of America’s fastest growing auto brands by dishing out underdeveloped crossovers. Yet in their quest to make the 2015 Subaru Legacy more palatable to prototypical midsize purchasers, let’s hope Subaru hasn’t cast aside the qualities that make the fifth-gen car unique.