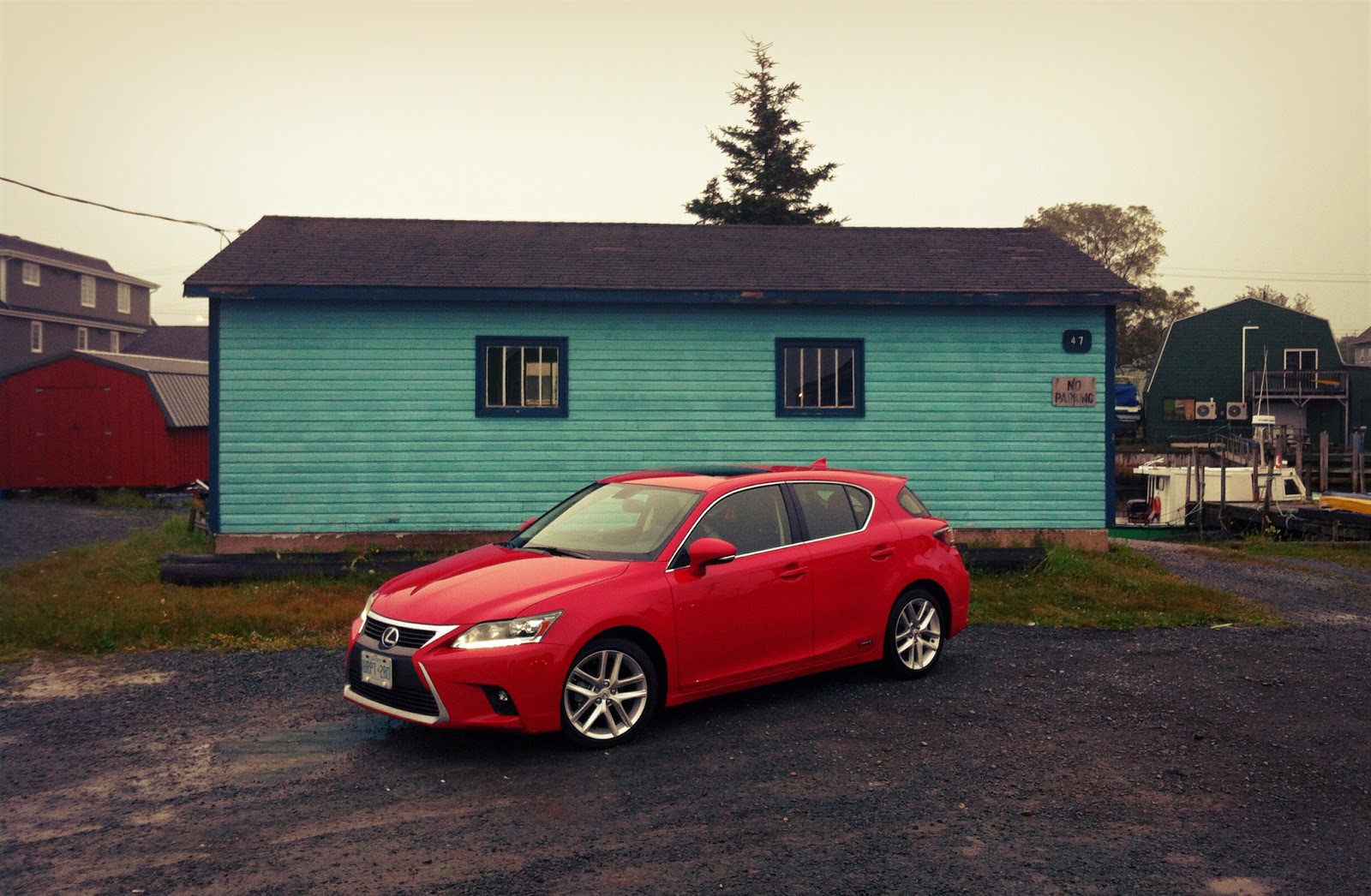 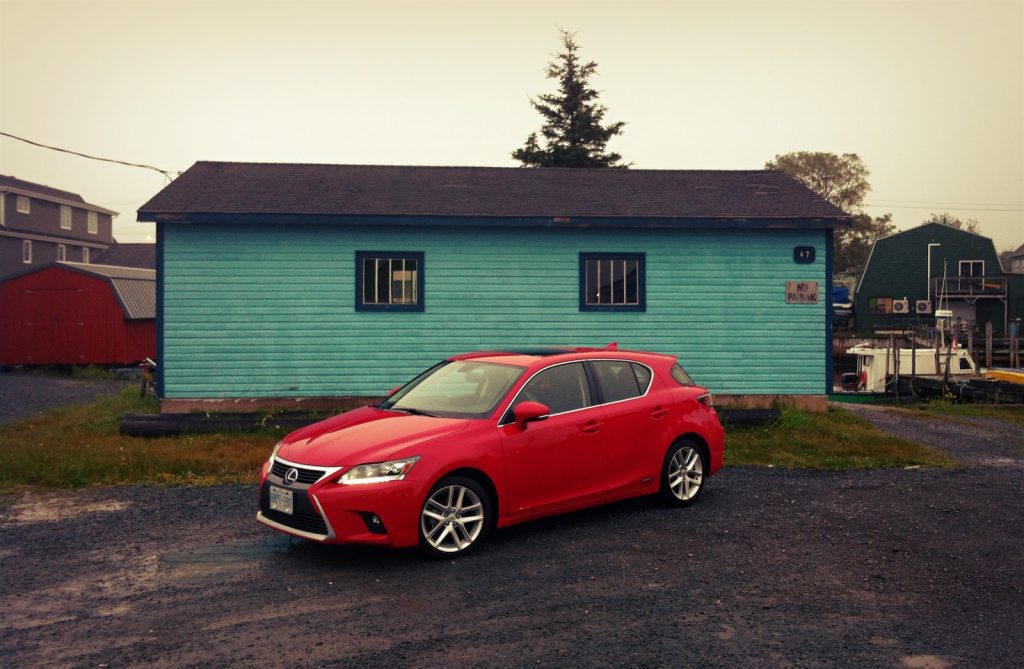 To ignore the fact that auto reviewers head into a review with preconceived notions is to forget that we’re humans, not robots. A car review isn’t a specifications chart, it’s language, however artfully (or not artfully, in this case) penned.

I don’t decide in advance to dislike a car. Indeed, as often as not, the cars I feel certain I will like instead leave me feeling somewhat underwhelmed. But if the information which I possess aforetime causes me to start the week with the assumption that I might not favour a car, I don’t robotically cast that notion aside.

I am not capable of doing so, just as I am not capable of saying, “I will be completely open-minded about this meal of battered catfish served on a bed of refried beans with a side of grits and an extra-large helping of black pudding.” 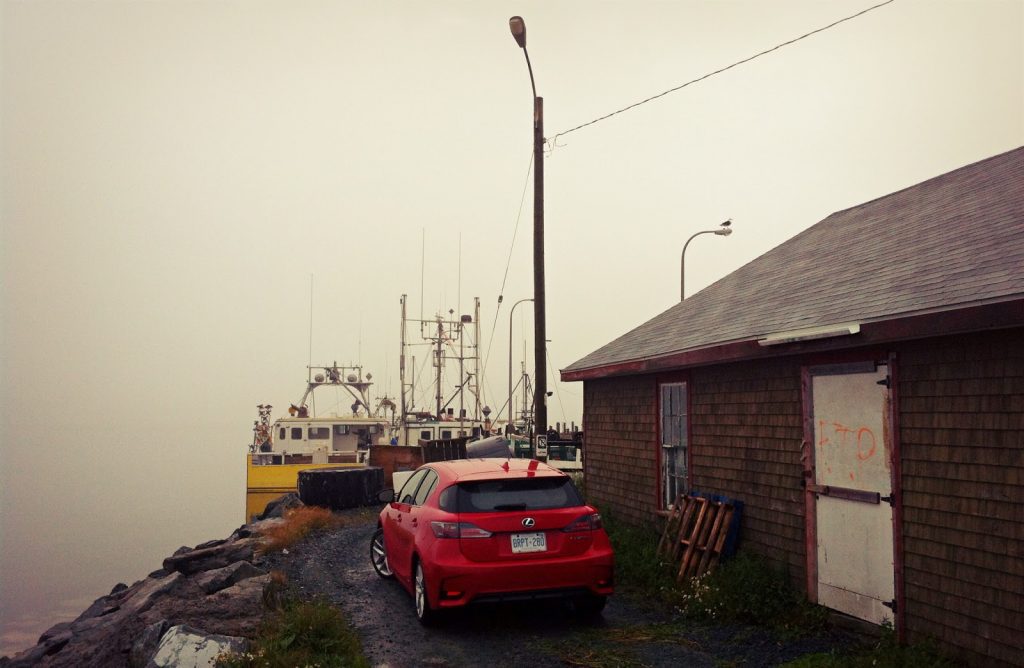 Yet in a large number of ways, the CT200h was decidedly better than expected, so much so that I could, if I squinted, see the car’s appeal, something I wouldn’t have said the day the car arrived. So maybe I’m more open-minded than I thought, even if I won’t eat catfish or black pudding.

The CT’s front seats are among the best I’ve sat in, good enough for me to see the overall appeal of the small Lexus, even without an up-down function for the power lumbar support.

The CT’s infotainment unit is easy to use, with quick access buttons for audio, home, and back surrounding a centre console-mounted circular control knob. There’s no slow-to-respond touch screen here, and long before week’s end I stopped looking away from the road to operate vital functions.

Outside, the CT provides onlookers with lots to see. It’s not conventionally pretty, nor is this specific car (a $39,745 Premium Package CT200h in Canadian parlance, similar to a $37,704 CT200h in the U.S.) as aggressive as the F Sport models. You may not think it’s a cohesive effort, as the new spindle grille is not as effectively integrated as it is on the IS. But from the tailgate’s bizarre shelf to the conspicuous hybrid badging to the wrap-around rear glass and the shapely hood, there’s something to look at. The CT is not boring, which from a company that formerly used car styling as anesthesia, is a good thing.

For the moment, the CT200h is also unique among premium brands in that it’s an entry-level hatchback. No, there’s not a lot of space behind the rear seats – we’ll get to that later – but it’s a flexible layout, and space for four or five occupants is better than decent.

Perhaps the greatest surprise to me was the CT200h’s handling. Yes, the car rides rather stiffly, so we expect a compensating degree of handling prowess. The electric assist steering, which doesn’t feel as artificial as so many modern systems, and the comfort with which the CT adopts and maintains a position when hustling down my favourite local roads, combine to make for a car that’s at ease with fast driving. (Once you eventually get up to speed.) The Lexus lacks the enthusiasm of Mercedes-Benz’s CLA whether the CT’s prominently-mounted knob is turned to Eco, left in Normal, or moved to Sport, which definitely upgrades the car’s personality and takes away some of the most drastic slow sensations.

Then again, isn’t there always (often? sometimes? every now and then?) something a little bit charming about a slow car being driven quickly? And me oh my, is it ever slow. Instrumented tests say 100 kph arrives in under ten seconds, but I’m not sure what kinds of seconds those are. The CVT just eats up so many of the 134 Prius-donated horsepower. Because you must work the CT hard when trying to keep a gently-driven Pontiac G3 in sight, half the slowness-related problem originates with the accompanying racket of a hybrid powerplant whose revs periodically head in a different direction than you expected. Perhaps with a conventional V6 the CT would be quiet like a Lexus is supposed to be. With this mode of propulsion, with some disappointing tire hum and a speck too much wind noise, it’s not. 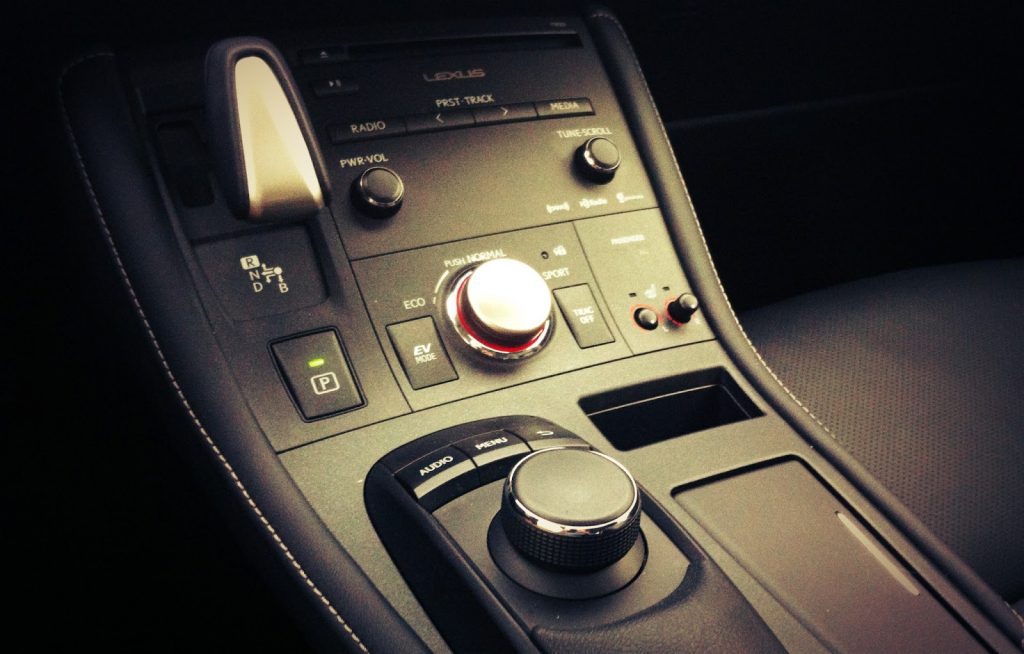 The lack of refinement, the lack of adequate motivation, and the overarching feeling that traffic is going that way and I’m not joining them, is enough to leave me feeling like the CT shouldn’t be called a Lexus.

It’s a bit like the family reunion of mostly successful siblings, most of whom run half marathons and attend PTA meetings and eat goat cheese and grow high bush blueberries along their white picket fences, where that one younger brother who’s kind of chubby showed up wearing a WWE t-shirt, actually sprayed his hamburger with Cheez Whiz, and started singing, “Smells Like Teen Spirit,” after the grandchildren sang, “The Wheels On The Bus,” at the evening campfire. Maybe it’s not exactly like that. But it’s a little like that. There’s an awful lot of obviously shared DNA: the hybrid addiction and the spindle grille and the love of cheese and the affinity for music. But there are notable differences.

Our press car had fewer than 7200 kilometres on the odometer, but the driver’s seat side bolster that gets chafed with every entry was quickly wearing away. The brakes have that prototypical hybrid regen grab, but then lack further bite. Why do I have to move a shift lever up and over and down and back but then use a separate pushbutton to put the car in Park?

I’m pretty sure I just used a foot-operated parking brake. And with 14.3 cubic feet of cargo capacity behind the rear seats, the CT is way down from the Mazda 3 hatchback’s 20.2 cubic feet and even farther away from the new Volkswagen Golf’s 22.8 cubic feet. These are huge gaps in load-lugging ability, gaps we weren’t very willing to disregard when the CT was maxed out by one large load of groceries. 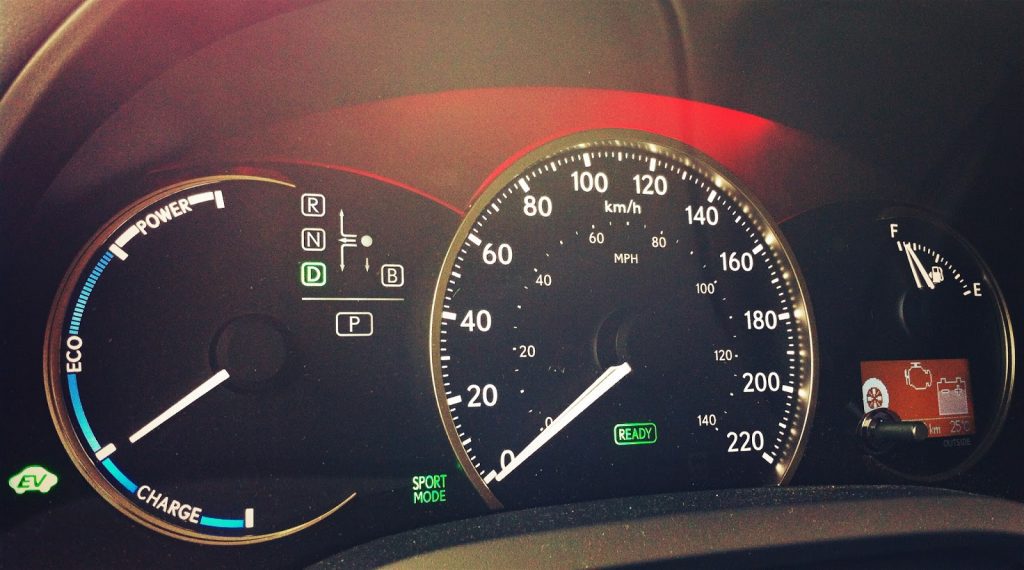 And then, like the guy who drives ten miles to save a penny per gallon on fuel, I temporarily lost all perspective when I filled up the CT200h before the car went back to Toyota Canada. It had burned less fuel (5.1 mpg) than even its OEE ratings (5.8 highway, 5.5 city) forecasted. This was pre-confirmed by the car’s own onboard computer, which I had assumed couldn’t possibly be accurate given the OEE ratings and the manner in which I drove the car.

I couldn’t overlook the CT200h’s lack of urge, its handful of non-premium missteps, or its ineffective cargo hold. I’d be happier in a fully-equipped Mazda 3 or a diesel-powered Golf, and I suspect most Lexus CT buyers would prefer to drive an A3 or CLA. 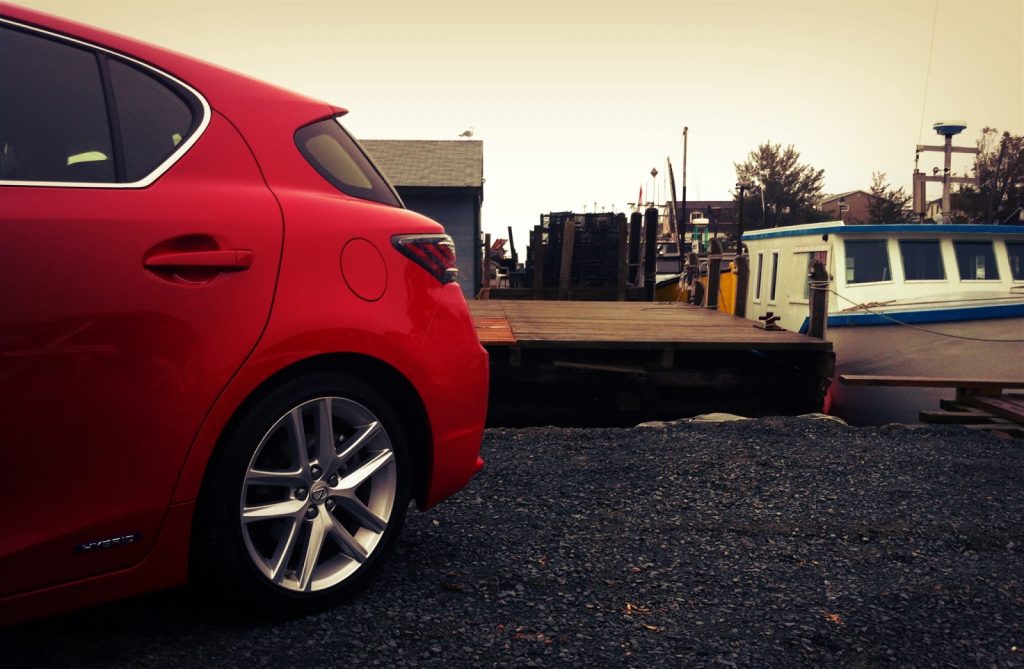 Maybe I’m missing the point; maybe I don’t grasp the importance of the CT’s uniqueness. The buyer who wants a mid-$30s upmarket car but can’t stand spending money on fuel – who presumably figures her Lexus will feel like a Lexus, and who used to own a Prius – likely doesn’t find those other cars all that appealing. Personally, I can see the CT’s appeal, I just can’t link it to my own tastes. Or the tastes of the vast majority of the auto-buying public: this car has not proven very popular.

Even though it does boast an unexpectedly tiny fuel bill, a Lexus badge, a long standard equipment list, a sense of style, and surprisingly decent handling.