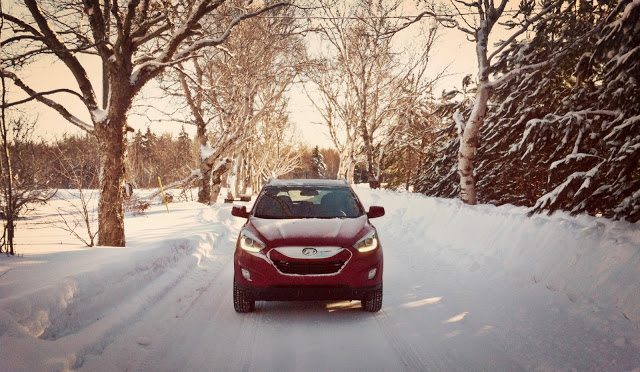 For the fourth time in 2013, GCBC was loaned a vehicle in order to take a trip from Nova Scotia to the beautiful province of Prince Edward Island.

Back in March, we journeyed to PEI in a tiny GM Canada-supplied Chevrolet Spark, an eye-catching and conversation-starting car, to be sure.

Two months later, we drove across the Confederation Bridge in a diesel hatchback from Volkswagen Canada, the Golf Wolfsburg, a darling of the enthusiast auto press.

At the end of July, summer vacation’s vehicle of choice was the top-trim Acura MDX from Honda Canada, a $67,935 family crossover that embarrassed the other road trip cars with its hedonistic equipment levels.

GCBC’s Christmas sled, however, wasn’t as eye-catching as a newfangled city car. It wasn’t a diesel hatchback with Germanic handling. It did not shock and awe with its ability to actually drive itself. No, the updated 2014 Hyundai Tucson GLS AWD, a crossover Canadians are accustomed to seeing on an everyday basis, a very common member of an increasingly common vehicle type, was tasked with engaging our little family in the most challenging circumstances. 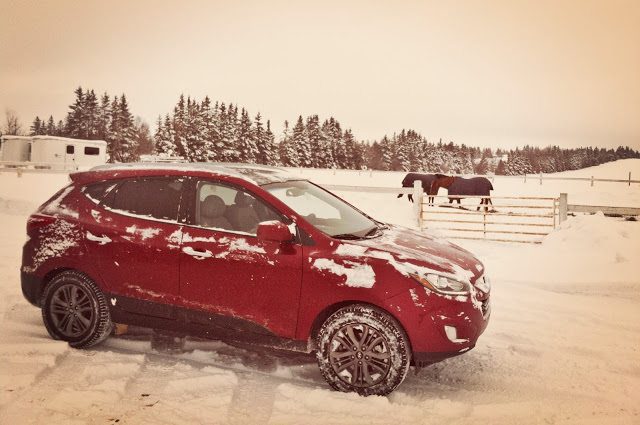 The Tucson needed to successfully transport two adults, an infant, all the infant boy’s contraptions and clothing, the adults’ stuff, and the pile of Christmas gifts destined for the in-laws’ living room to Summerside, Prince Edward Island.

Oh, but it’s not summer on this side of the Earth on Christmas Day. Therefore, the 2014 Tucson was forced to deal with proper winter conditions on the Cobequid Pass, worse conditions across the Tantramar Marshes, inescapable ice during our trek through the eastern section of New Brunswick’s Westmorland County, and a genuine winter blast in the eastern section of PEI’s Prince County.

A tall hatchback named after a desert town perched high above sea level had to face off against winter on a Lilliputian Canadian sandbar. The stars had aligned to set up a Tucson failure. Circumstances had been arranged in such a way as to, in effect, make any vehicle’s inability to succeed a forgivable offence. 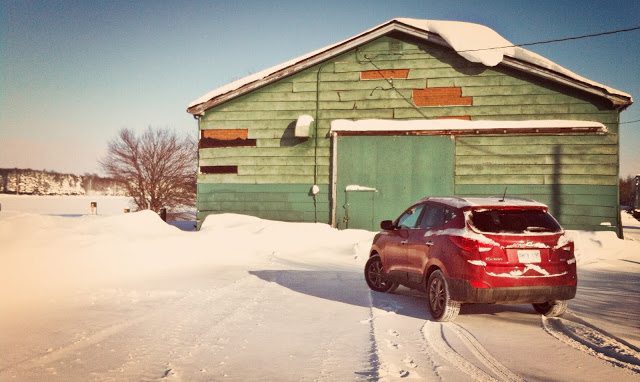 There were hits. And there were misses. Yet in a very economical fashion, the Hyundai Tucson – wearing essential Michelin X-Ice tires – safely delivered us to our destination four hours after our voyage began. It certainly received a passing grade, but were top marks achieved?

In part, this explains the Tucson’s manoeuvrability, as it was much easier to make progress in Truro’s tightly-packed parking lots than it would have been in Hyundai’s 185-inch-long Santa Fe Sport. But it doesn’t pay dividends in the cargo compartment, where the CR-V boasts 27% more available cargo capacity.

Did all our stuff fit? Well, yes. And no. That which was necessary came along with our suitcases, camera bag, and the rocker, but my guitar had no hope of being squeezed in, nor did our boy’s new sled, which would have come in handy in Summerside’s hip-high snow. (Not kidding.)

A basic all-wheel-drive 2.4L-powered Santa Fe Sport also weighs around 300 pounds more than this Tucson, and that weight advantage works in the Tucson’s favour to make for a much more agile Hyundai crossover.

The Tucson changes direction more quickly than bigger two-row utility vehicles, and while it doesn’t have the sporty feel of a Nissan Juke or Mazda CX-5 – the Tucson’s steering is too slow and its poor brake feel doesn’t inspire confidence – it’s moderately fun to perform Scandinavian flicks on rural, snow-covered roads in PEI.

I never let it get too woolly; snowbanks in -17ºC weather aren’t soft. But opportunities for immaturity were plentiful, and though it couldn’t compare to a 1992 Acura Integra which  travelled sideways for 150 metres behind Dartmouth’s Akerley community college, the Tucson likened itself to the small, driftable cars of my youth in a way I hadn’t anticipated. In a way that won’t be matched even by heavier sporty SUVs with supercharged V8s and trick adjustable suspensions. They’re all too big, and the Tucson is contentedly compact.

That contradiction of small but grown-up appears mainly because its quiet, beige, well-equipped interior causes the Tucson to feel like a more mature device than the frolicking Juke or sometimes-noisy CX-5, or that ’92 Integra. For twice the price of a basic Hyundai, you expect a more upmarket experience than the similarly lengthy subcompact Accent, and you get one.

There are surprises in here, both good and bad. The cloth/leather mix is actually nice, the nearly all-glass roof provides a hi-lux sensation. Whoa, that’s a bite-size backup camera tucked into the corner of the rearview mirror, only visible when reversing. Rear leg room doesn’t suffer much, if at all, in comparison with the larger Kia Sorento GCBC tested in late October. There’s no lumbar support for the driver, but space and visibility is sufficient, and the means by which so many features are standard fit is so typically Hyundai as to be almost forgettable: heated front and rear seats, dual zone climate control, easily configurable Bluetooth, and a windshield wiper de-icer. Hyundai’s high feature load has become so normal for the brand that we often set it aside as a secondary subject matter. 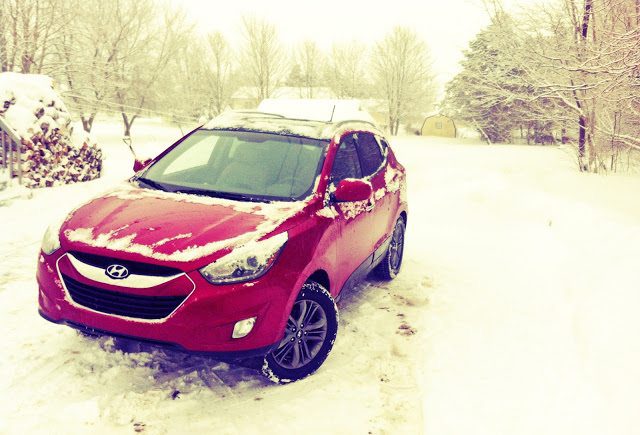 The 2014 Tucson’s direct-injected 2.4L four-cylinder now makes 182 horsepower, an adequate sum for a vehicle of this size. Fuel efficiency continues to be the focal point of Hyundai Canada’s Tucson advertising campaign that dominates Hockey Night In Canada on Saturday nights. With all-wheel-drive and this optional powerplant, the stated 20/25 mpg (U.S. EPA) aren’t mind-blowing figures. Yet despite the economy-killing weather in which frequent deceleration provoked near-constant acceleration, we averaged a low 8.5 litres per 100 kilometres in the 2.4L Tucson, equal to 28 mpg on the U.S. scale. Figures for the slightly more powerful Santa Fe Sport are expected to be only slightly below the Tucson’s, but could it match the Tucson in the real world? 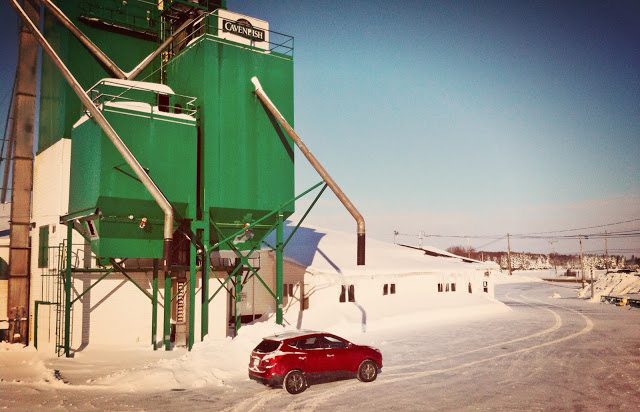 I’ve always interpreted cute-ute as a derogatory term, yet I can’t help but think it’s a fitting turn of phrase for this Tucson. If only the Hyundai looked like its Kia sibling, the Sportage, I’d also be happier with the Tucson’s capabilities. (Of course, the Sportage driver can’t see out the back of his vehicle, so there’s that.) 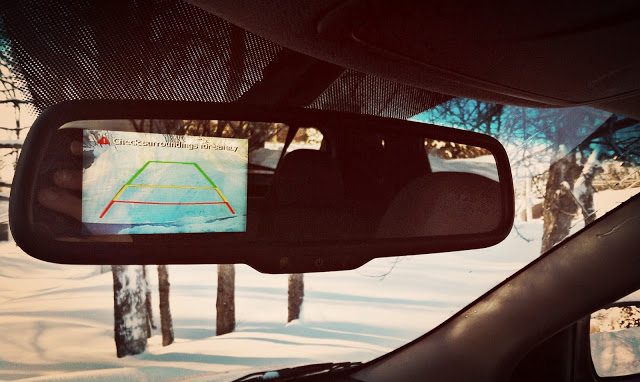 At the end of the week, however, I wasn’t comparing the Tucson with the (optionally turbocharged) Sportage, but with the oft-mentioned Santa Fe Sport. The middle rung on the Hyundai crossover ladder happens to be where the largest chunk of sales originate, and that’s not surprising. While this Tucson is the more enjoyable Hyundai utility vehicle to take down those rural, snow-covered PEI roads, its limiting size is a detriment to outright success. The Santa Fe Sport feels like a lot more vehicle for very little more money. And if driving dynamics are the priority, Hyundai’s own Elantra GT offers the purer car-like experience, and it’ll also offer equivalent luxury at a much lower price. 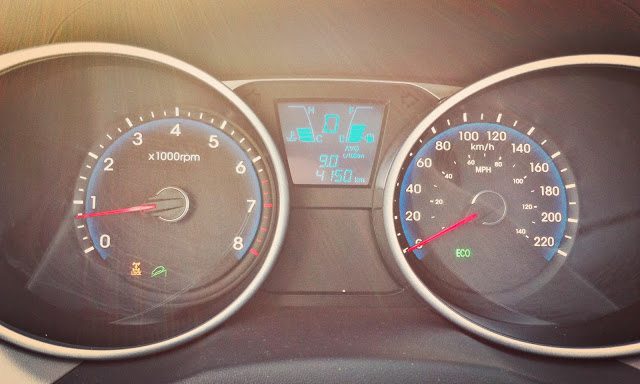 Passing grades? Yes, the Tucson did as we asked this holiday season, and we were more than a little thankful for the safety and stability it provided on our baby boy’s first interprovincial expedition. But Hyundai’s plentiful array of superior stocking stuffers shine blinking red and green lights on the Tucson’s shortcomings. The 2014 Tucson’s size, that which makes it surprisingly tossable and easy to pilot in close quarters, also calls its value quotient into question.