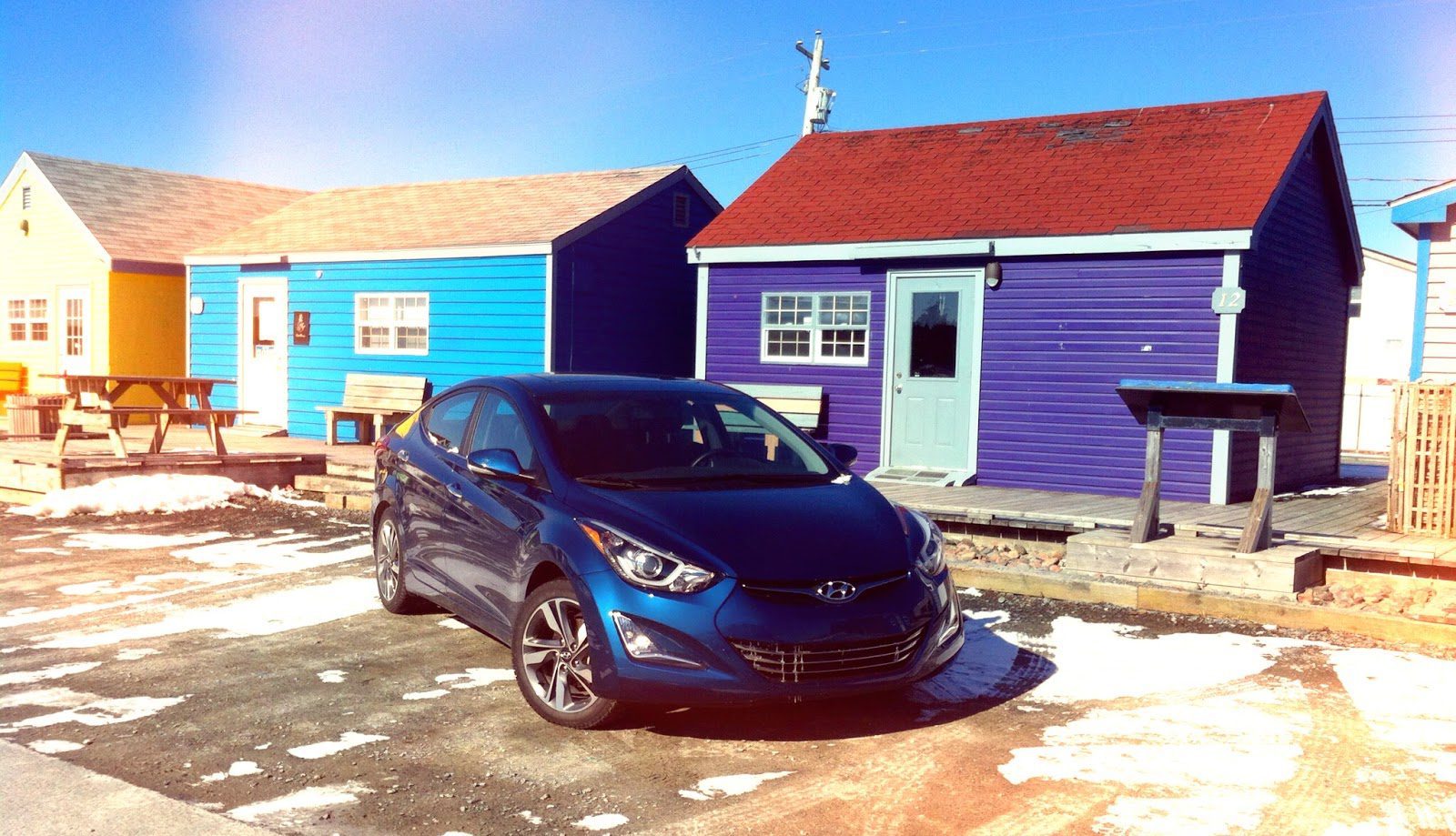 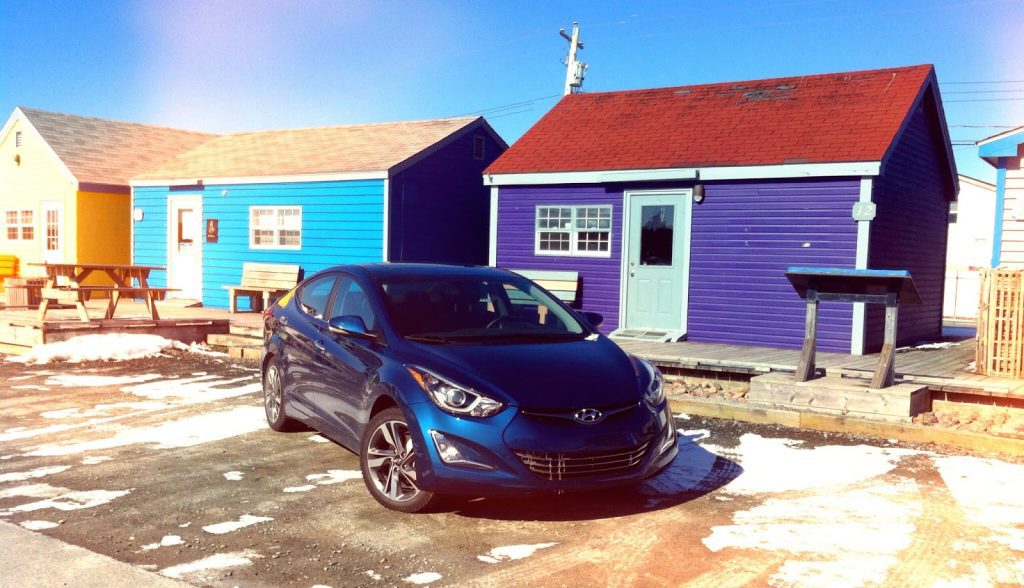 Over the course of March 2014’s first week, GoodCarBadCar enjoyed access to Canada’s best-selling car from the month of February 2014. Hyundai Canada had parked a top-trim 2014 Elantra in front of GCBC Towers, a car that ended 2011, 2012, and 2013 as Canada’s second-best-selling car.

The Elantra is undeniably popular; not much less common than Honda’s all-conquering Civic, the best-selling car in Canada in each of the last 16 years. Nevertheless, Hyundai has realized that if the current Elantra is to take on the Civic on a continual basis, and if it will be tasked with fending off newer challengers, the company couldn’t allow the Elantra to grow stale by waiting until a completely all-new Elantra arrives.

The front and rear styling has been tinkered with, new alloy wheel designs have been added, LEDs make frequent appearances, and Hyundai says they went to work on reducing noise, vibration, and harshness.

But this 2014 model looks to be virtually identical to the handsome 2013 Elantra. The exterior and interior changes aren’t significant. Equipment alterations aren’t life-altering

The availability of a 173-horsepower 2.0L four-cylinder engine, on the other hand, is noteworthy.

Our tester, which at $27,199 (including destination) is the most expensive Elantra sedan, came equipped with the Elantra Limited’s sunroof and rearview camera, but the Tech package increased the size of the touch screen from 4.3 inches to 7 while also adding navigation and proximity entry, removing the need to use an old-fashioned key. 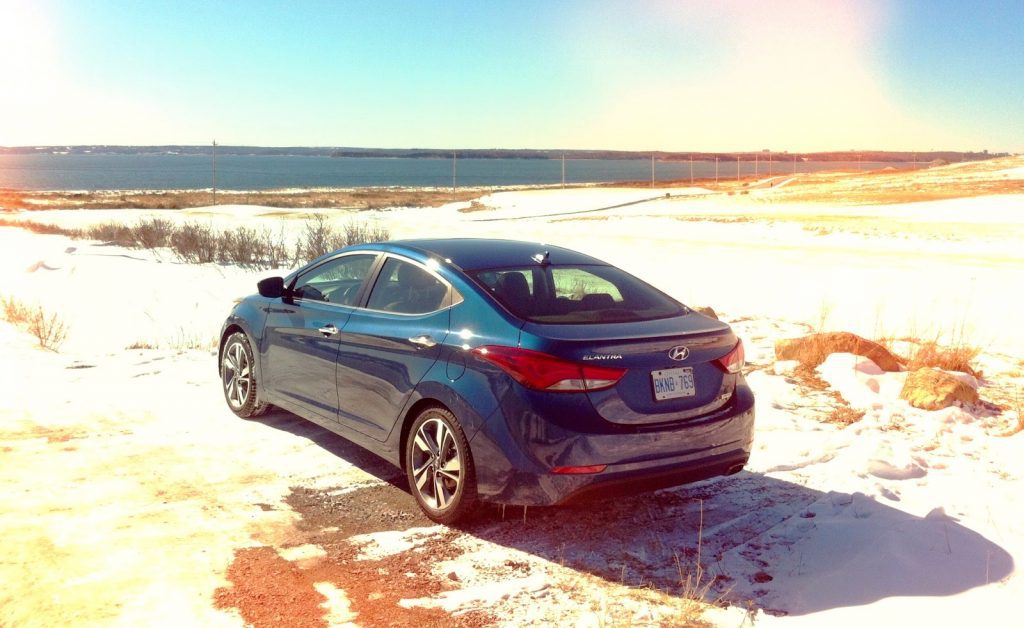 $27K is a lot to pay for a compact car, even one that looks as good as this Elantra. But there’s no dearth of space for occupants or cargo and the equipment load is heavy, a combination which generates something of a midsize impression. In addition to all that, the Elantra Limited has heated front and rear seats, a power driver’s seat, an auto-dimming rearview mirror, and leather seating.

Yet toys and horsepower does not a great car make. (It doesn’t?) No, it doesn’t. Consumers expect a lot from compact cars from these days. If the 2014 Hyundai Elantra Limited wants to price itself like a decently-equipped midsize car, it must do more than equip itself with extra heating elements and more motor.

Inside is clearly where the Elantra excels, not just because of the standard kit – even the much less expensive GLS has a cabin full of heated seats, the sunroof, and the backup cam – but because of the attractive centre stack and its intuitive button layout.

The big, centralized knobs for fan speed and volume are welcome in this era of touch-capacitive “buttons.” Material quality doesn’t stand out, neither for its high or low quality, but the seats are comfortable, the tilting/telescoping wheel helps the driver find the perfect position, and visibility is better than I remembered in the Elantra I drove a few years ago.

Best of all, space is abundant. The Civic apparently offers 29 fewer litres of passenger volume, but the gap feels more meaningful.

In terms of space for the passengers’ stuff, the next-best-selling Toyota Corolla provides 51 fewer litres of cargo capacity, a noticeable drop off, particularly as the shape of the Elantra’s trunk makes cramming in big stuff a simple task.

The Elantra rides and handles well enough, but it does fall short in one way or another of matching its top-selling rivals on the road.

The Civic, even in its latest softer iteration, is the slightly more engaging car with the happier-to-rev engine. (The Elantra’s driver selectable steering modes – comfort, normal, or sport – are more gimmicky than engaging.)

The Corolla isolates vibration in the forward one-third of the car, whereas our Elantra test car allowed a surprising amount of the 2.0L’s buzz to make its way through the throttle pedal and the overall cabin.

The Mazda 3 is undoubtedly the stiffer-riding car, and that won’t please everyone, but its steering and overall liveliness simply set it apart from the pack.

Volkswagen’s Jetta still offers a rather Germanic feel, though not to the extent it did before the advent of this sixth-gen Jetta.

The Chevrolet Cruze absorbs the road’s imperfections in an admirable way, tricking the driver into thinking they’re in a much bigger car than they actually are.

The Elantra is not a dynamic disappointment, but it’s no dynamic masterpiece. It doesn’t love to be hustled, and yet, it doesn’t emphasize ride comfort as a trade-off.

Moreover, any improvement in NVH seemed lost in our car, and it’s hard to blame the engine alone, as we tested the same powerplant in Kia’s Forte, a car we lauded for its luxurious ambience. This specific Elantra’s four-cylinder was very fresh from the factory, and the fact that its 173 ponies felt a bit lazy lends some credence to the theory that, once in its groove with more than 5000 kilometres on the odometer, it’ll settle in with more smoothness.

In this segment, competition is fierce and margins are slim. No Elantra alternative is perfect. Few are as nice to look at. But the Elantra makes hay off of approaching the class leaders in every aspect, never failing in any one area. If it’s not the roomiest, it’s close to it. It doesn’t have the most available horsepower, but it offers plenty more than many automakers do. Interior quality isn’t the highest, but it’s not far from it. Kia offers an even better-equipped Forte, but the Elantra is, in used car salesman language, loaded.

And while greater fuel efficiency can be found in rival cars – and even in the Elantra family – this 2014 Elantra 2.0L consumed just 7.8 litres per 100 kilometres, equal to 30.2 miles per gallon on the U.S. scale. Our routes were almost completely citified and were completed in consistently sub-zero weather, yet we still managed to easily top the EPA’s 24-mpg city rating.

Forget compacts. The Elantra now does a fair Sonata-beating impression. To be fair, it’s more than an impression. For every Sonata sold in Canada last month, Hyundai sold more than four Elantras. With mileage, space, and equipment like this, that’s not a surprise.