2014 Chevrolet Impala LTZ Review – Exactly What You’ll Want If This Is What You Want, Which You Probably Don’t 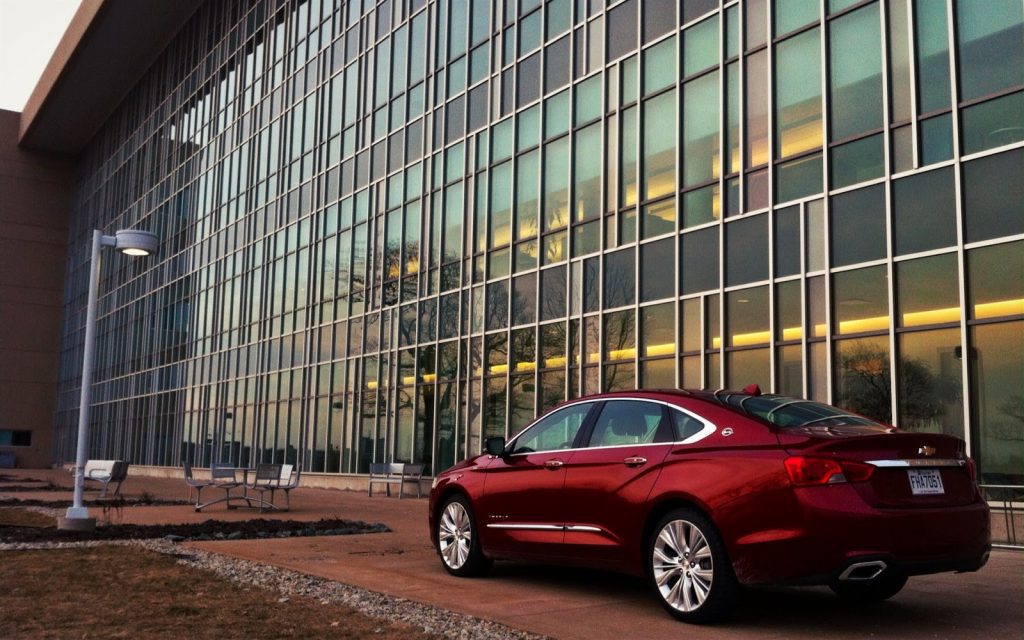 As months pass by, a greater and greater swathe of the population cancels their land-line phone contract in favour of communicating exclusively through their mobile phones. Perhaps the latest cordless in-home phone receives HD videos, reads out text messages, and makes every caller sound as clear as James Earl Jones telling Simba to, “Remember who you are,” in The Lion King. I’m still not going to buy it.

I introduced the latest 2014 Chevrolet Impala to friends and family all over town during the week in which GM Canada loaned GoodCarBadCar their new big sedan. Every single person who spent time in the car – or even just looking at the car – came away hugely impressed, all the more so because of the features fitted to this $46,945 example.

Yet not a single person would even contemplate, nor will they contemplate in the future, trading in their small car, midsize crossover, or minivan for this full-size sedan.

I had questions for these individuals: my parents, a soon-to-be father of two, my MBA-enrolled brother-in-law, to name a few.

Is the 2014 Impala executed to perfection? Very nearly, they were certain.

It is desirable? Hugely… for a week-long trip across the country, they said.

If not this, then what? 3-Series, A4, or Highlander, not necessarily in that order. 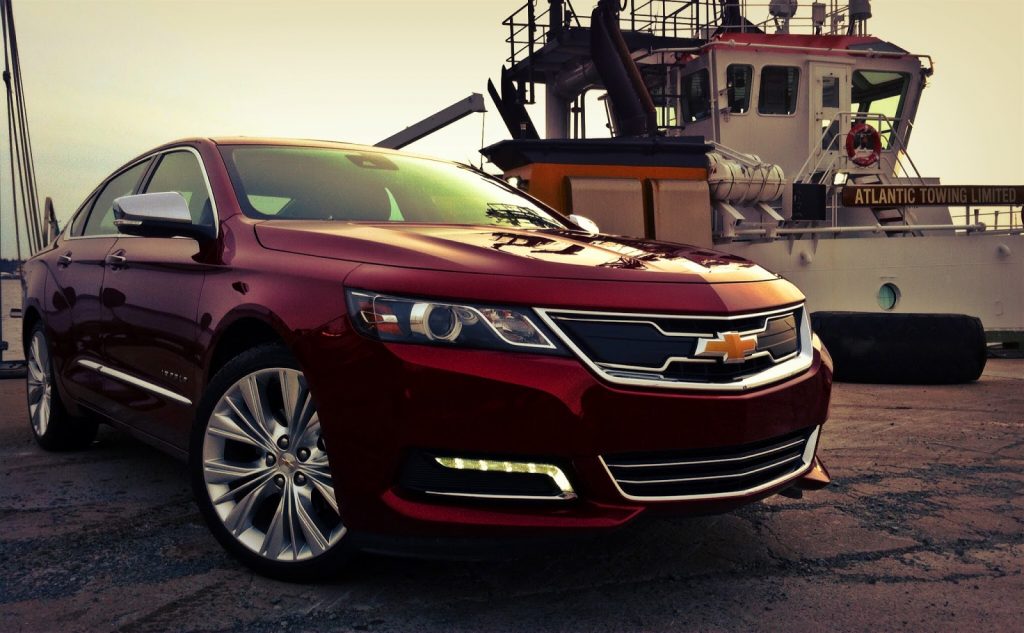 Many Canadian consumers must think they want big sedans. After all, a fair number of automakers continue to market their 5-metre-long cars here. But life gets in the way, and car buyers want more flexibility, better fuel efficiency, a less stodgy image, and a lower price tag. Just as they want the internet in a pocket-sized device that, while doubling as a game console, also takes video calls, sends mail, and plays music.

There is proof in the numbers. For every Impala sold by GM Canada this year, they’ve also sold more than seven Cruzes and five Equinoxes and nearly five crew cab Silverados.

The Impala and its direct rivals are down 10% in early 2014, and while Impala sales are up slightly year-over-year, they’re down 56% compared with Q1 of 2012. Moreover, with the Dodge Charger and Chrysler 300, Chrysler Canada is controlling the big sedan category, a segment which now accounts for little more than 1% of the overall new vehicle market.

In the meantime, car buyers are missing out in this handsome behemoth.

Sure, it’s a little heavy on the hips in tenth-generation form, as though it inhaled too much ice cream at Franklin’s Dairy Bar during the development phase. But I can’t find anything else I’d change about the way the new Impala looks, especially when it’s riding on these optional ($420) 20-inch wheels.

From its chiseled chin to its glaring eyes and tastefully applied chrome on the mirrors and doorhandles and lower body sides, the 2014 Impala certainly carries the styling sway of a near $50,000 car, and it does so even when priced well below $40,000, as well.

Inside, although build quality is high and Chevrolet appears to have spent time selecting the proper materials, there’s little sense of high-end style besides the mood lighting at night.

The control layout is ultra-simple, a good thing indeed, but this lends to sub-premium aura in the Impala. It’s not Scandinavian sleek; not Teutonic trendy. The steering wheel is one of the ugliest I’ve seen, although it’s a delight to touch. There’s also plentiful teal stitching (inside a red car that also has white stitching?) that was leftover from a concept car build in 1996.

Yet you won’t have any difficulty selecting the optimal temperature or navigating through the satellite radio menu, and you will be ensconced in a hushed cabin with enough space for your rear passengers to legally reside in another municipality.

I can’t imagine these front seats were made for people who fit into Club Monaco clothing, but the thicker among us will fall in love.

The rear floor’s big (and strange) centre hump is a detriment to what is otherwise a very comfortable space to spend time.

Space is equally abundant in the cargo hold, where a ridiculous 532 litres (18% bigger than the Kia Cadenza’s) tricks the eye: peer in and you’ll think it’s big, but bend over a bit and you’ll see that the trunk extends even farther than originally thought.

With family and friends and the proverbial golf bags on board, the 2014 Impala impresses with its optional 3.6L, 305-horsepower V6. There’s some friendly growling as the engine realizes it must haul all 3867 pounds of Impala plus the human content, but as revs rise toward 4000 rpm and then 5000 rpm, it’s obvious that you’re in a fast-moving machine, and the Impala is only just getting into its groove. 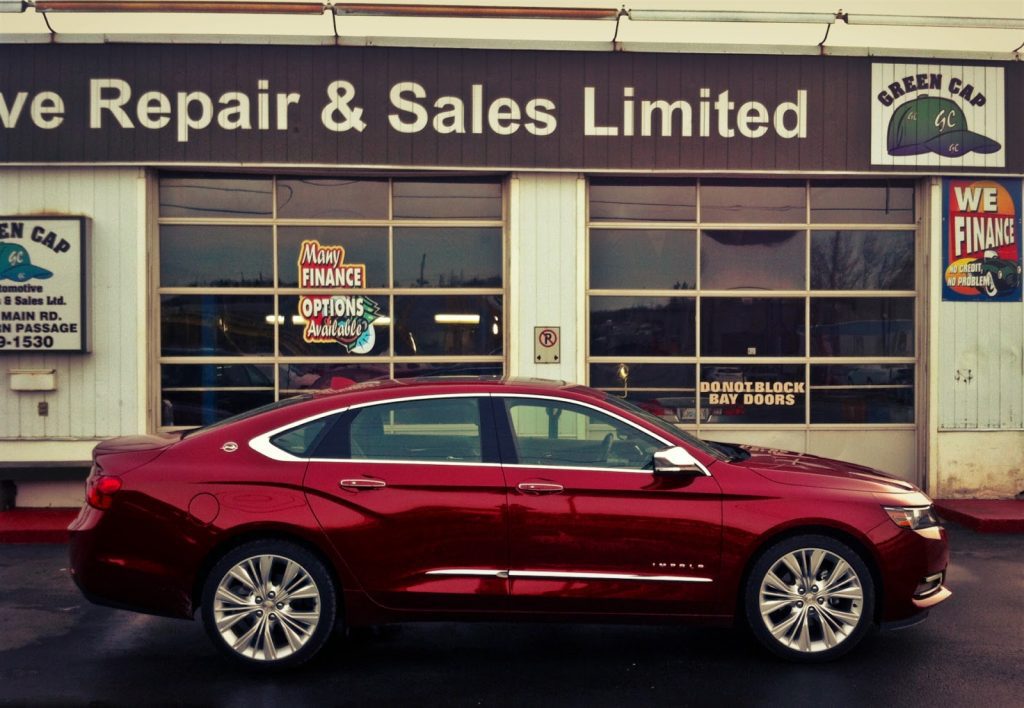 Now that speeds have risen too high, you’re noticing that body motions through dips and over crests are very well-controlled. There’s no hint of roughness; no smacking at pavement imperfections, not even on these 20-inch wheels. Nor is their any struggle to maintain composure.

This is not a floaty barge, but keeping that in mind, we must also realize that the only guy who could possibly think the Impala’s ride is too firm once added pillows to his Buick Roadmaster’s suspension.

Twisty roads do create an issue for the Impala, poised though it may be. Such a large part of the Impala’s on-road resume would be decidedly unusual for the big Detroit cars you once knew, but the steering remains quite true to the past. It’s bizarrely light with a massive on-centre dead spot and it’s simply not in keeping with the renewed spirit of the car, and not functional enough for a ten-tenths drive down my favourite rural roads.

Does the Impala need to be a sports sedan to attract 13,000 monthly U.S. buyers? It probably shouldn’t be, actually. Yet when a car with these kind of dimensions  shocks with its body control, one wonders what kind of car Chevrolet could have built had they not needed to welcome back loyal big car buyers. 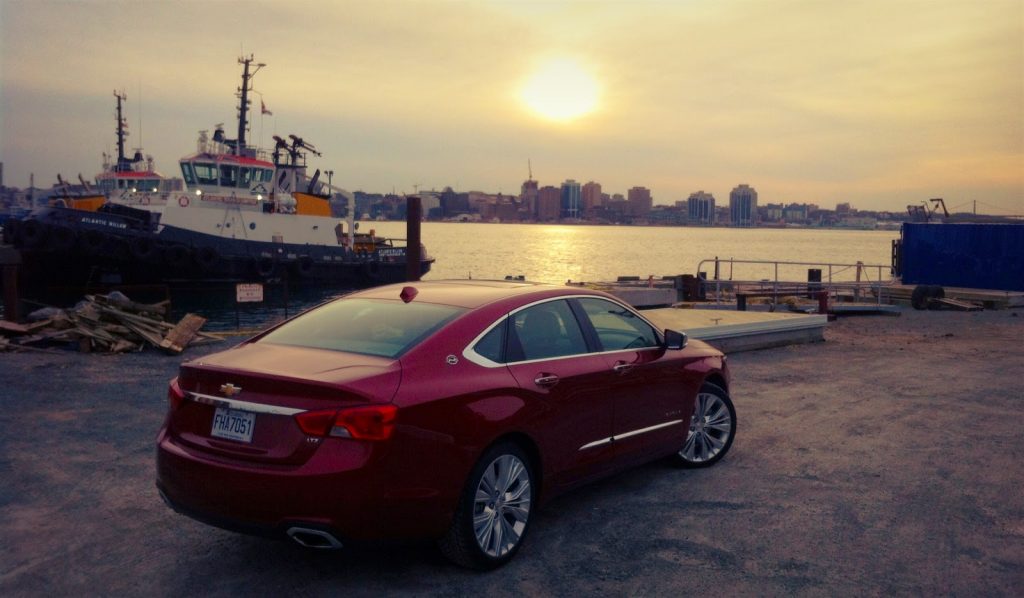 Not to be too blunt, but those loyal big car buyers are literally a dying breed. If only a car like this new 2014 Chevrolet Impala could also attract consumers who have yet to retire, those who are still willing to consider Honda Accords and Ford Fusions, then the big sedan market’s Canadian future would become more secure.

With four-cylinder Impalas coming across as rather undesirable and V6-engined Impalas starting near $35,000, we can all acknowledge that a younger Canadian buyer is going to instead be attracted by lease offers on a much smaller BMW or Mercedes-Benz, or even a Buick Verano Turbo.

They’re missing out on one of the automobile universe’s best-ever highway cars, however, a car that can whittle away the hours with premium audio and adaptive cruise control and legs-crossed rear passengers. Is the Impala worth it? Undoubtedly. But you’re not about to go back to rotary dial, are you?