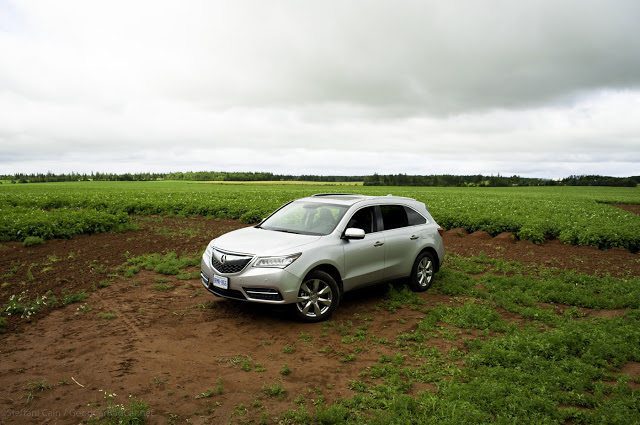 Remember when car reviewers started reporting on the first BMW X5 14 years ago? They were enamoured with its ability to take corners at speed, and they thought it was more of a 5-Series than a Range Rover. They also said that driving the X5 over any road with an ounce of roughness was a tooth-loosening exercise.

I spent a week driving Acura’s third-generation MDX around Prince Edward Island, where the empty backroads are often as rough as the paths that lead through the middle of the island’s potato fields.

The MDX wasn’t frazzled by rough roads, neither do corners ruffle its feathers. Not yet gone are the days when we had to clarify that corner-capable crossovers exceeded our expectations… for an SUV. Yet the 2014 Acura MDX represents a strong move among premium family crossovers to fulfill both practical and dynamic needs. 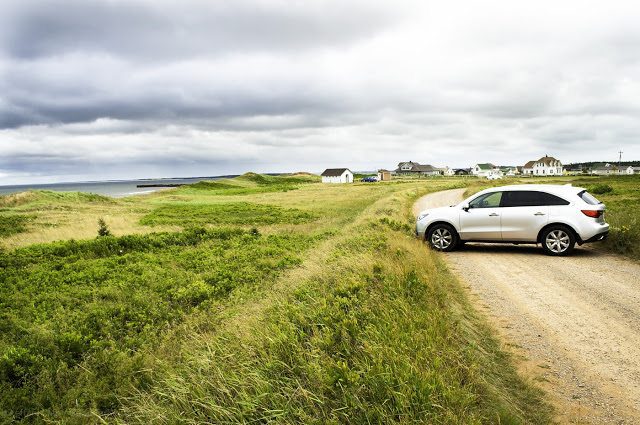 Until recently, premium SUVs either handled well or rode well. A week in Prince Edward Island was more than enough to discover that the 2014 Acura MDX isn’t either; it’s both. Two weeks in the MDX’s driver’s seat was also more than enough time to discover that enjoying the MDX’s dynamic qualities involve living with the Acura. But for one reason, that’s not always so easy.

Before the MDX, there was very little about a car that can steer itself that appealed to me. Indeed, the MDX’s self-steering needs driver input and, left to its lonesome, isn’t very good at steering. Oh, it’ll keep the Acura in its lane on the Trans-Canada Highway, and even many rural roads where the lane lines are partially missing. But it veers from one side of the lane to the other, searching for parameters.

With your guidance, used the same way your non-dominant hand helps you shoot a free throw, the MDX’s self-steering reduces your effort level, and thus your level of fatigue on a three-hour trip across three provinces.

Sound ludicrous? It does, especially when it’s paired with cruise control that can bring an MDX to a stop and more than enough cameras to show Anne of Green Gables, Stompin’ Tom, Brad Richards, and Mike Duffy on your centre screen. (The cameras, all 972 of them, are awesome.)

Most of our drives in PEI, even the longer ones across the north shore and from Summerside to Tea Hill were done with rear passengers, but not in the third row.

Lucky them. If second-row passengers are willing to sacrifice what Acura gave them, the MDX’s third row isn’t brutal. But this is not an SUV for seven adults. Fortunately, this sacrifice with which third-row passengers must abide creates usable space behind the third row. It’s shaped nicely for actually carrying stuff, so you can take seven people and some groceries home for dinner. That’s not the case in all of the MDX’s rivals, which often have an acceptable number of cubic feet but are so awkwardly shaped that they’re rendered useless.

Up front, the MDX’s mostly excellent seats are let down only by seat cushion bolstering that curves inward right where I curve outward. Overall width is wonderful – the centre console is almost pickup truck-like. Alas, the sunroof is small, as it makes way for a widescreen entertainment system out back. So much for sleeping on the MDX’s cargo floor under a panoramic view of the skies above Twin Shores, where city lights are as far from interfering with pitch black darkness as Netflix is from VHS cassettes.

The 2014 Acura MDX makes less power than the 2013’s bigger-engined model, but that difference isn’t felt. We’re quite clearly living in a jaded era: 290 horsepower in a family wagon feels sufficient but not special. Honda’s V6 engines are smoother than the soft-serve at the Frosty Treat in Kensington, but they’re not stump pullers. I’ve said before that the Infiniti JX’s CVT isn’t offensive, but the MDX’s 6-speed automatic makes me feel sorry for the JX buyer who doesn’t get to feel shifts like this. Balancing a quick shift with the need to blur every shift is a trick no CVT will (obviously) ever pull off. 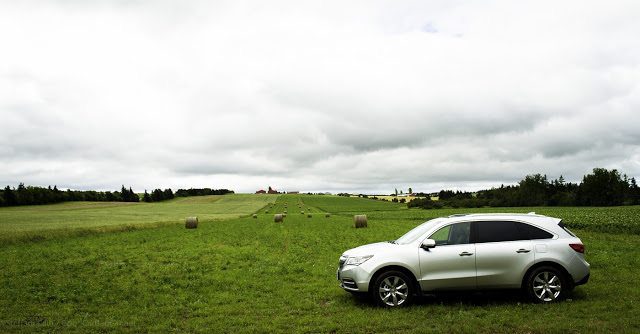 Nevertheless, a decrease of ten horsepower isn’t the kind of progress consumers want to hear about. Honda, principled Honda, realized that it doesn’t matter, and hopes you realize that, too. At the top end, the 2014 MDX shed 324 pounds, and consequently, each of the new MDX’s horses must propel 14.7 horsepower, an improvement from 15.3 pounds per pony in the 2013 model.

The MDX’s diet pays greater dividends elsewhere: in agility, which we talked about earlier, and in fuel efficiency. We drove around Halifax and then left from Eastern Passage, Nova Scotia, stopped in Wentworth Valley and then under the Confederation Bridge for the obligatory photo, and made haste for Summerside. More drives took us across the Gulf Shore Parkway through Brackley to Stanhope, where we walked down one of PEI’s oldest roads, plus more drives to Argyle Shore for an evening of cottage life, to downtown Charlottetown for a performance by the Confederation Centre Young Company, and a bunch of journeys to overcast beaches.

Fuel efficiency is definitely not the MDX’s problem.

The MDX arrived with a handful of manuals, some quite thick. I was about to spend two weeks in a car I hadn’t driven, and my time in Honda products hasn’t been plentiful of late. I studied the booklets, and I got to know the MDX’s On-Demand Multi-Use Display system. It didn’t matter that I knew the MDX’s voice commands, however, since the MDX couldn’t understand the most simple commands. Work the buttons? There are only a few. Most major controls are completed through a touch screen. Below that screen there are buttons and a knob which operate a non-touch screen which sits above the touch screen. Huh?

The system isn’t slow like Ford’s; nor is it prone to crashing. You can learn it. But that doesn’t make it instinctive, and it’s certainly not intuitive. The back button rarely goes back to the previous screen, for example.

Overall, Acura’s ODMUD might be a reason for you to want a different vehicle to drive down east from North Cape to East Point, or drive up west from Hunter River to Tyne Valley. That’s what Islanders do, go up west and down east.

But if it’s a reason to avoid driving the 2014 Acura MDX, it must be the only one.

They’ve figured everything else out. Imagine how the MDX would flourish if the already successful crossover possessed a centre stack as thoroughly engineered as the rest of the car.