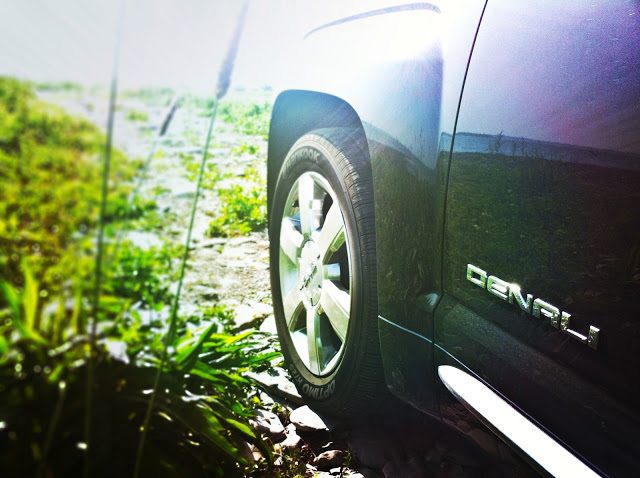 Turning a $28,695 crossover into something that costs $45,765 is a process that starts with a couple of obvious upgrades. A V6 which generates 65% more horsepower than the basic 2.4L four-cylinder is of foremost importance. All-wheel-drive adds 160 pounds and $1950. A bundle of features make up much of the superficial redevelopment.

And finally, there are 10.5 inches of badging on each of the front doors, four inches on the two front seats, 5.5 inches on the sill plates, and 2.5 inches on the steering wheel. These Denali badges indicate the presence of stitched leather, illuminated sill plates, wood accents, and in case you hadn’t already noticed, acres of chrome on the grille, wheels, exhaust, and bodysides.

The $45,765 Terrain must not simply be a $45,765 Terrain – it must tell you that it’s a $45,765 Terrain. Don’t snicker: premium brands shout about their luxury intentions as well, only they use four rings or blue and white propellers or three-pointed stars as surnames rather than suffixes.

As is becoming the norm in GoodCarBadCar reviews, our attempts to quantify the merits of the 2013 GMC Terrain Denali involve placing it in the shadows of other vehicles. It’s hard to discover whether the Terrain is worth $45,765; it’s easier to understand the reasons it succeeds or fails at that price when it’s forced to encounter the idea of battling multifarious rivals. 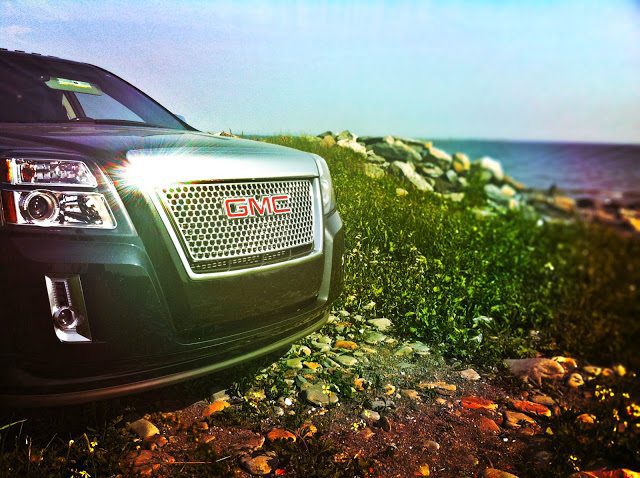 The Terrain Denali isn’t a Ford Escape Titanium. A heavily optioned Ford Escape, North America’s current top-selling utility vehicle, feels more closely related to a base Ford Escape than the Denali feels like a base Terrain. It’s more than badging – the Escape has Titanium badges, too. The Terrain’s exterior design is masculine, whether you like or loathe the end result. Excessive chrome can be perceived as classless, but it does carry an aura of expense. This isn’t the first time GMC has successfully made the Denali line feel like a cut above. As with the Yukon and Acadia before, the Terrain Denali no longer feels like a direct rival for the premium versions of its rivals, the CR-Vs and RAV4s and Edges and Escapes of the world.

The Terrain Denali isn’t a GMC Acadia. More than a foot shorter than the Acadia, six inches narrower, and a few inches shorter, the Terrain takes up a lot less room in your garage. But apart from the missing third row, the Terrain feels cavernous for passengers. The rear row slides way, way back without severely restricting cargo space. Sliding the bench up to meet the front seats makes life easier for parents with little ones, too. Up front, the ‘rents have stretch-out, lounge-like space, too.

The Terrain Denali isn’t a Lexus RX350. The Denali is certainly not what every luxury crossover buyer chooses. It doesn’t have just 270 horsepower. (It has 301.) You won’t notice all the Terrain’s power right at takeoff, but as speeds rise and revs climb closer to the 3.6L’s 6500-rpm power peak, the gruff but very potent American V6 is reminiscent of a small GM V8. You won’t say that after driving the Lexus. 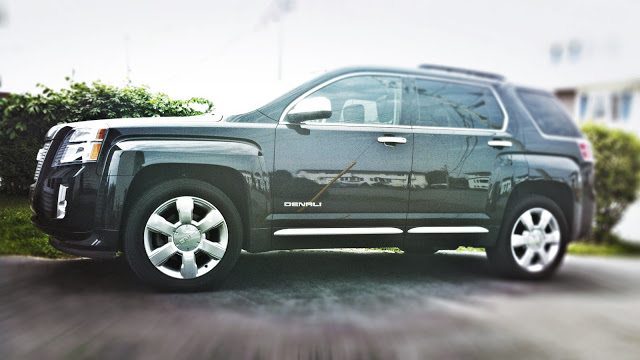 The Terrain Denali isn’t a Ford Escape Titanium. The Terrain feels really heavy, and with nearly 500 more pounds than an all-wheel-drive Escape Titanium, it ought to. GMC has also placed a greater emphasis on ride comfort than they have on handling and agility. Together, the weight and comfort-oriented intentions and slow steering make for a Terrain that feels like an Acadia. It doesn’t want to be hustled, and you won’t want to hustle it. That’s not something people do, or want to do, in big SUVs. Or smaller crossovers that feel big. 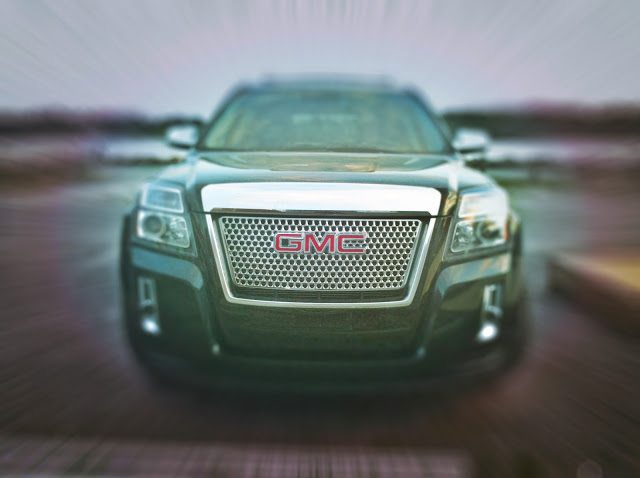 The Terrain Denali isn’t a GMC Acadia. The purchase or lease of an SUV or crossover is usually motivated by a desire for greater and more flexible space. This may not mean you’re prepared to sacrifice a wood and leather steering wheel, the Denali badges, automatic climate control, a powered passenger seat, leather, or a powered liftgate. But you might consider space to be the ultimate luxury, and the Acadia can be purchased at a similar price point with a moderate feature load and much, much more space. The Acadia has 82% more overall cargo space and 122% more cargo space behind the second row. While, at 16/23 miles per gallon, the EPA fuel efficiency ratings for an all-wheel-drive Acadia aren’t particularly appetizing, those numbers are disgusting when applied to the all-wheel-drive Terrain, which weighs around 800 pounds less than the Acadia. 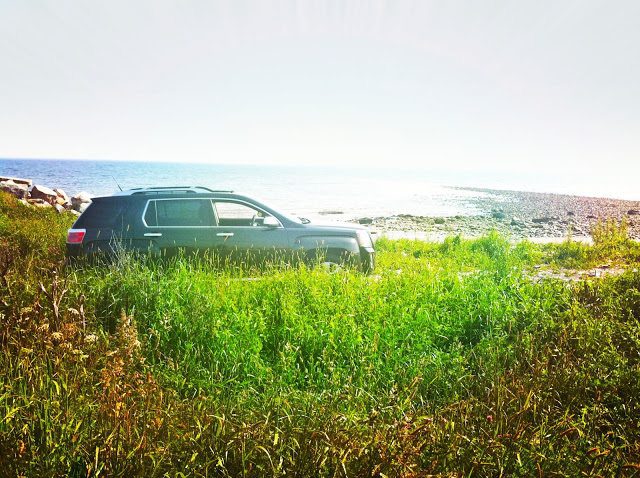 The Terrain Denali isn’t a Lexus RX350. Or a Cadillac SRX. Or an Audi Q5, BMW X3, Mercedes-Benz GLK, Infiniti JX35, or Jeep Grand Cherokee. You can get premium brand status and quality for less money than this tester. The Denali’s automatic climate control only operates in one zone. The tailgate groans during left turns. Shifting manually requires sliding the gear lever back another notch and then tapping buttons near the top of the lever, which is dorky. The touchscreen associated with GM’s Intellilink is easy to get to know, but GM’s robot of a responder doesn’t understand the majority of my voice commands. The Denali’s seats are comfy but aren’t bolstered well enough for corners. The hood over the touchscreen was an afterthought. Backup cameras aren’t all that useful if they’re this grainy or this easily-washed out, either. Overall, the feeling inside is that of high-lux GMC, not Cadillac. Not Audi, or Infiniti, or Lexus, for that matter.

Fortunately, because it’s a GMC, most people won’t know you just forked out $46K on a depreciating asset, and even with Denali badging, they won’t feel you wasted spare change on a premium nameplate. (They may feel you wasted money on fuel. In a mix of city and highway driving, our all-wheel-drive Terrain Denali V6 averaged 19 mpg during its stay. That’s on par with its EPA rating, but its EPA rating is dreadful.)

In the General Motors family, the Terrain Denali is the way to get into a luxurious yet moderately sized crossover. There is more luxury to be had elsewhere, however. More space, more refinement, and better fuel efficiency, too. But as a combination of power, uniqueness, and space, the 2013 GMC Terrain Denali is capable of seducing the GM faithful, all the more so if they don’t consider what else they could buy at the same price point.