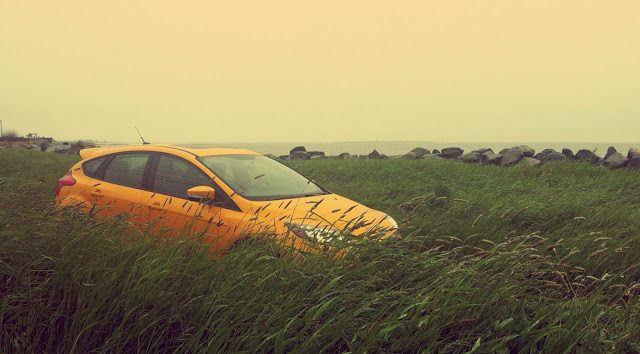 Hours before Ford Canada had a 2013 Focus ST delivered to my driveway, I complained to GCBC’s sometimes-photographer about the likelihood of our test car’s paint colour being Tangerine Scream. I develop a high level of police-inspired paranoia when I’m driving a fast car, an even higher level when the car looks fast, and an extremely lofty level of paranoia when the car is fast, looks fast, and then goes a step further by drawing attention to itself with a look-at-me colour. 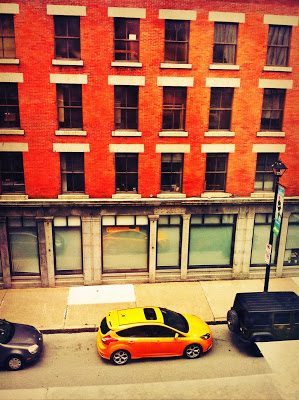 As you can see from my iPhone pictures here – GCBC’s photographer has been periodically taking temporary pregnancy leaves – the Ford Focus ST arrived at GCBC Towers in Tangerine Scream’s full blaze of glory, as predicted. I figured I was in for a week of driving 59 kmh in 60 zones and manual upshifts at 3000 revs.

But I couldn’t resist the turbocharged four-cylinder’s appeal, I couldn’t ignore its call, I couldn’t deny myself the privilege of pushing it hard. Every now and then. Within the legal limits, asterisks and all.

Focus ST170 aside, Ford has been known to keep its hot hatches out of North American hands. The 225-horsepower Focus ST of eight years ago stayed away, so did two different RS-badged Focus hatchbacks. (Ford has also denied us the hardtop Focus convertible and refuses to bring the Focus wagon back.) But now, for the first time in a decade, we’ve been offered a hot Focus. It’s not the second coming of the Lancia Delta Integrale. It’s not another reincarnation of Renault Sport’s crazy Clio. It’s not a copy of the Ford Racing Puma.

It is, however, a terrific all-rounder. Fun for the whole family, you might say. In a return to the format GoodCarBadCar used in the recent Mazda 6 review, a format we plan on using routinely (in shorter form), one week with the 2013 Focus ST revealed five reasons Ford’s hottest hatchback deserves top honours, and five reasons you might decide to look elsewhere. Readers who remember that Mazda 6 review won’t be surprised to learn that the reasons, on both sides of the coin, are exactly the same.

The Focus ST isn’t a Volkswagen Golf GTI. I remember driving a 180-horsepower Mk4 Golf GTI and thinking it felt pretty punchy, even torquey from low down. Now, the 200-horsepower GTI feels inadequate after throttling up the 252-horsepower Ford, a car which generates 270 lb-ft of torque from a low 2500 rpm. It’s not about the 0-60 mph sprint. We don’t do many of those in real life. It’s about where the Focus ST’s power is located. Where? Everywhere. Here, there, over there, under that, on top of the other thing. Found yourself one gear too high at too low a speed? (It was your fault, as the ST is equipped only with a 6-speed manual transmission.) Fret not: there is power here, too. Power, don’t you see, is the overwhelming character trait in the Focus, not so much in the GTI.

The Focus ST isn’t a Mazdaspeed 3. You’re not twelve. You don’t need hood scoops for amusement. You don’t need understeer, either. But you do need traction. Apart from a bit of wriggle in the wheel when throwing down in a high-rpm upshift into second, the Focus’s behaviour is mostly polite. Follow up that shift by pressing the throttle pedal to the floor and you will be met with some rude gyrations from the front axle. But the Focus ST is mostly so very mannerly. Ride quality isn’t just superior to other intentionally sporting small cars, it’s superior to that of most small cars which don’t make handling their prerogative. If it weren’t for the OTT Recaro seats, you could take your wife’s grandmother for a drive and she’d never know you were in something a bit crazy.

The Focus ST isn’t a Honda Civic Si. Despite its lower power ratings, the Civic Si won’t use less fuel than the Focus ST, and it’ll be drinking the same premium stuff as the Ford. By the numbers, on paper, it’s barely fair. 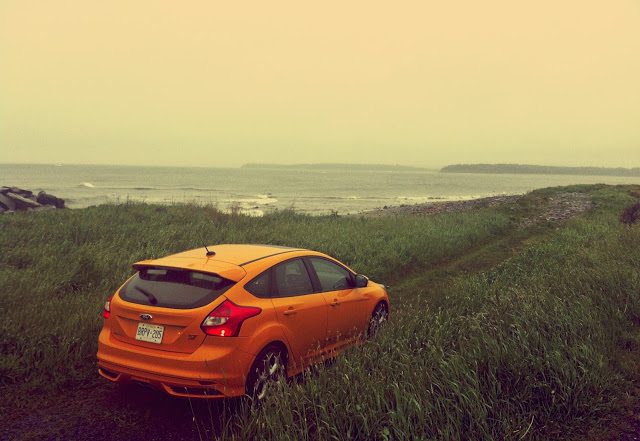 The Focus ST isn’t a Fiesta ST. Ford’s upcoming hot hatch is significantly smaller inside. That’s not the end of the world, but it will almost certainly be noisier than the Focus, most likely less refined. Harder materials, less equipment, less power, less torque. Sure, there are savings to be had, but it’ll be difficult to lob the Fiesta into the Focus’s class. And will the Fiesta ST have the Focus’s quirky electric power steering? Poor by the conventional standards of feel, the Focus ST’s rack weights up in a bizarrely cool way. In an ideal world, this isn’t the steering you’d ask for. But in a world of electric assist, it’s quirky, not boring. And even if Ford can pull off interesting Fiesta ST dynamics – and Ford probably can – we’re still dealing with a $25,000 Fiesta. 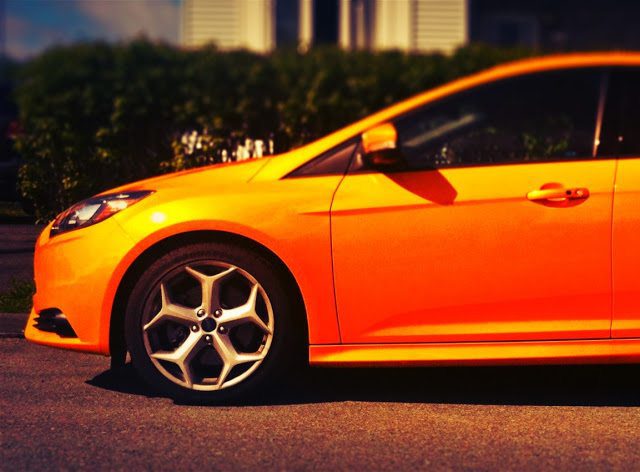 So what’s the problem? Well…

The Focus ST isn’t a Volkswagen Golf GTI. Fast versions of ordinary Fords have a long and highly regarded history in Europe, less so in North America. Here, the Golf GTI is the ultimate icon of hot hatchery. Plaid seats, two or four doors, two transmissions to choose from, and the kind of refinement and comfort you’d expect from a big German car combine to make the GTI a car for adults. It’s a sportier and decontented hatchback German rival for the Buick Verano Turbo.

You’ll sound like an old man, preferring the the GTI (or Verano) to the Focus ST. But the Golf’s rear seats are more appropriate for big people, visibility is far superior, and seats-folded cargo capacity is larger and laid out better. In a performance-oriented car, does this stuff matter? I have to believe it does, or else you’d be more interested in a purer driving experience, a Subaru BRZ perhaps, than a car with room for five people and their stuff.

Also, the GTI is devoid of class-defining characteristics. In other words, it belongs in the driveways of the rich and famous as much as it belongs in mine. The Focus ST looks like it’s trying too hard. Indeed, a Focus Titanium hatch on five-spoke wheels, one of the planet’s best-looking current hatchbacks, looks a lot better than this Focus ST.

The Focus ST isn’t a Mazdaspeed 3. Torque steer is bad, right? Except, when an over-powered front-wheel-drive car doesn’t need too much wrangling, as is the case in this Ford, its driver can be left feeling underwhelmed. Of all the feelings you’ll describe after a hard drive down a twisty mountain road in a hi-po Mazda 3, underwhelmed isn’t one of them. Rough and raucous, the Mazda is never anything but an experience. Getting the power down can be an adventure. There are 96 more horses in the 3 than in the rear-wheel-drive MX-5 Miata, but in the Speed 3, as in the Focus ST, the front wheels must put the power down and steer. The Focus ST rarely struggles to marry power to pavement. Because of this and a few other positives that can be misconstrued as negatives – superior ride quality, light clutch, light steering – the Focus ST, while never dull, doesn’t always feel exciting. There’s no edginess, no danger. And it feels like a car for the everyman, not a highly skilled driver… like you or me. Yeah, right. 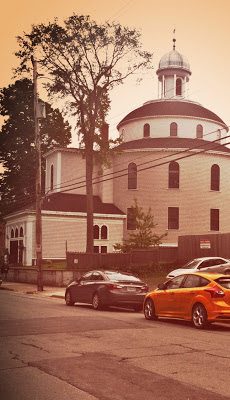 The Focus ST isn’t a V6-engined Ford Mustang. Ford has always offered an inexpensive Mustang, but the V6 used to be an engine to avoid. No longer. The 3.5L generates 305 horsepower and starts under $24,000. (There’s currently a $2500 factory discount in Canada, too, dropping the price to $21,499.) Surprise: the Mustang is a performance bargain. Of course this isn’t news, and you probably won’t want the basest of Mustangs. But with the current $5500 discount on Mustang GTs, even a V8-engined Ford pony car costs only pennies more than the Focus ST I drove. Awake, my soul, to the sound of a burbling V8. Granted, for a turbo four, the Focus ST sounds really good, too.

The Focus ST isn’t a Honda Civic Si. Civics, even the new ones, feel light on their feet, and the more they’re hustled, the lighter they feel. Civics aren’t hugely interactive machines, but neither is the Ford. The Civic Si is available as a coupe or sedan, and for the hatchback-averse who don’t want Focus ST, Mazdaspeed 3, or VW GTI, that’s music to their ears; trunklids to the tips of their fingers.

Moreover, Detroit speed remains anathema to thousands of sport compact buyers. Even in its increasingly serious old age, the Si is still a Honda, and it’s still a Civic. The Ford won’t ever be. The Civic’s shifter was developed by Honda, the Ford’s wasn’t. Throws are too long in the Focus, a fact which is mostly made up for by the personable clutch. The Honda is the more comfortable car for its driver, too. As much as I grew accustomed to the ST’s outrageously bolstered Recaros, drivers with bodies thicker than my lanky frame won’t. And even if you do fit, they make exiting the car a pain. I’d get them, but I suspect your waist is rounder than mine, so you shouldn’t. I’ve always thought the latest Focus’s cabin felt small for the driver, and those crazy (good) seats make that all the more painfully true.

The Focus ST isn’t a Fiesta ST. Forget the $5000 in savings. Ford’s upcoming Fiesta ST will weigh less than the Focus. It’s obviously smaller. And the hope will be that it’s therefore the more chuckable car. Throw the Focus into a corner and it grips and grips and stays surprisingly neutral, but it doesn’t feel small, and it doesn’t feel light. (It certainly didn’t feel small when I was trying to complete a U-turn. The turning circle is truck-like.) The Fiesta ST won’t be as quick or as spacious, and it could certainly be argued that it won’t be as stylish. But since when did hot hatches need 252 horsepower? Hot hatches should be able to change direction in a hurry. Shedding 500 of the Focus ST’s pounds should help with that.

As much as the Focus ST is a testament to Ford’s ability to turn a regular car into a driver’s car, it’s also another clear sign that hot hatchbacks could very well be the type of car we’d all drive if we all had to drive the same type of car. Performance, practicality, relatively decent fuel efficiency, moderate affordability – these are all good things. The Focus ST is also equipped with a healthy dose of slow-moving but always-working TouchMyFord technology.

Where else does it differ from its peers? The Focus ST is faster than the Volkswagen Golf GTI, easier to use than the Mazdaspeed 3, far more livable than Ford’s own Mustang, far more attractive than the Civic, and quite a bit more car than the Fiesta ST. Again, these are all good things. As are all the no-charge colours. Tangerine Scream For A Speeding Ticket paint costs $400.