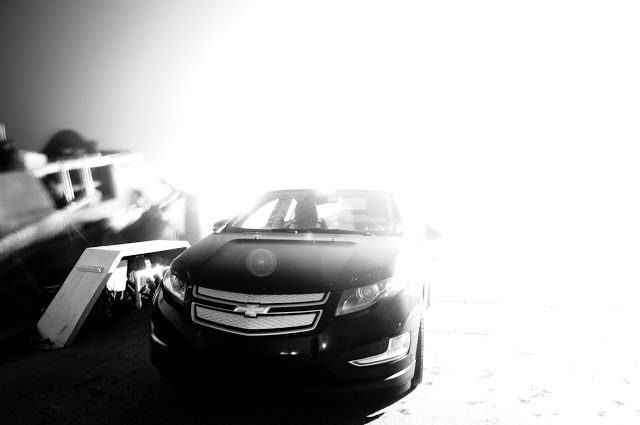 More than in most new automobiles, consecutive days in a Chevrolet Volt reveal hidden characteristics and manifest undisclosed factors that you can’t possibly encounter on a brief test drive at your local dealer.

Fortunately, I’ve been given both opportunities. A year ago, I was given a brief battery power-only drive. Last week, GM Canada offered me a few days to properly get to know what life is like in the high-tech Chevy. That first drive was long enough to find clarity in regards to some of the Volt’s dynamic traits. A substantial amount of torque presents Volt drivers with an ability to quickly take off from rest. (Electric) silence is golden. Ride quality is big car good. The Volt’s steering is disappointing but not surprising – it feels very electric. And there’s an overarching sense of normality, but one that is married to a perpetual feeling of blissful irregularity.

Apart from a price that requires potential buyers to spend thousands more than they would on a similarly-equipped car, the Chevrolet Volt’s unique form of empowerment never causes the car to feel whimsical. Its wild, white touch-sensitive instrument panel is unique. Its four-seat hatchback layout isn’t common. But freaky, bizarre, or outlandish? Not in the least.

That’s a good thing. There’s no special driving technique. You don’t need to pass an ownership qualification test. Technically, you don’t even need to plug it in. Indeed, you may never need to gas it up. Or plug it up. Or gas it in.

While in GoodCarBadCar’s safe keeping in early March, when temperatures were not much warmer than freezing, electric range varied from approximately 50 to 65 kilometres. Once the battery ran out of usable range, the gas engine conspired to consume 7.6 litres per 100 km. Over the course of its stay with us, the 2013 Volt’s MPGe worked out to 55, but averaged 93 when the internal combustion engine wasn’t running.

There’s no denying that the Volt’s 1.4L four-cylinder is felt. There’s a normal amount of vibration when it’s running, vibration which simply isn’t encountered when the car is running solely on the power it received from being plugged into the side of GCBC Towers. 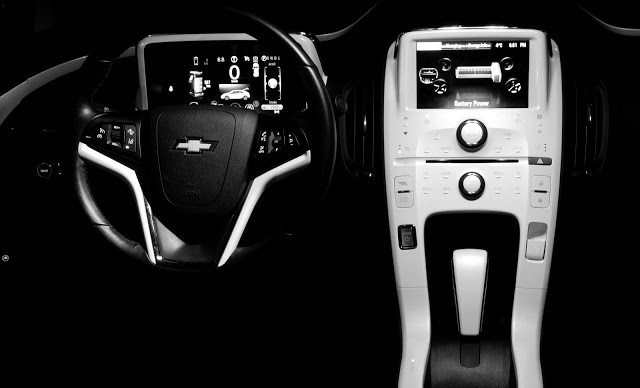 The original feeling of excessive weight I felt on my short Volt drive last May is better known when maneuvering the car into and out of snug parking lots – more Impala than Cruze here – but it isn’t so much of a bother when pushing the car hard in the twisties. The Volt is no sports car, of course. But that instant surge of torque you’ll experience will have you wanting to drive the Volt quickly.

It is in these cases that Volt owners will be thankful they’re driving something composed, something that’s willing to turn, if not steer (or charm) like the Ford C-Max Hybrid I reviewed last week.

Ever cognisant of the Chevrolet’s electric wonders, it’s still difficult to reconcile the car’s $46,530 as-tested price with the lack of power seats and missing sunroof. What’s worse, the Volt’s manually-operated seat adjustments feel brittle. The cheap stuff doesn’t stop there. The seatbelt buckle feels like it came from a ’97 Buick Century. Bizarrely, the flimsiest of all Volt parts is the door that encloses the Volt’s electric outlet, a piece that should be highlighted with a uniquely good material choice. The chintzy column stalks are very unwilling. And the poor quality of some dash-top material choices are really only made known because they’re parked beside shamlessly classy stuff like the vast white-as-snow control panel.

Ah yes, the centre stack. I didn’t know there was anything wrong with conventional buttons, but it’s hard to argue with the contemporary appearance of the Volt’s touch-sensitive column. The seat heater pads were the least likely to accept the first touch. Though never ideal for me personally, the remainder of controls operated as they should. Voice recognition was poor, as well, so it was nice to be able to operate the 7-inch touch screen while wearing winter gloves. Keep in mind, that screen is the display for a dreadful backup camera. It’s easily washed out, often shadowed, poorly angled, and always grainy. You won’t want to pay for it, but it’s part of a $705 package that includes parking sensors and an auto-dimming rearview mirror, which you may want. You also can’t get Front Parking Assist, Lane Departure Warning, or GM’s Forward Collision Alert unless you first select that $705 package.

In back, passenger space could stand to be a bit better, but once situated, rearward passengers issued no complaints about comfort. The practical uses for the massive cargo area further solidify the Volt’s status as a normal, everyday car, free from sacrifice and restraints and limitations. 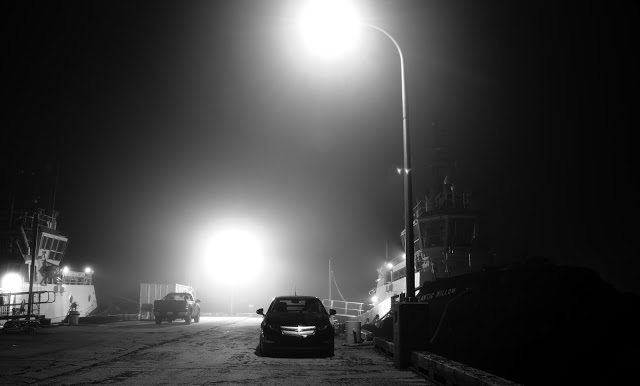 For all I know, you may be GM’s target buyer: a commuter who’s in the market for an unusual $40K+ car. (Presumably, the buyer of a $30K car does the math and realizes he can’t afford a Volt, regardless of fuel savings.) For the relatively well-off, the joys of routinely driving a purely electric car may make up for the loss of the Volvo’s space, the BMW’s dynamics, and the Lexus’s serenity.

On the other hand, how does one put a price on the early adoption of technology? Viewed in the right light, the Chevrolet Volt could be considered unusual enough to justify an even higher price. It looks normal enough that you won’t be asked questions constantly, but strange enough that it won’t go missing in a parking garage. It drives nicely enough at speeds legal or not so much. And it is well equipped, just not for a $46,000 car.

Most importantly, every drive in a Chevrolet Volt is an event. Yet it’s always uneventful. You don’t have to worry about how far you can travel. The transition from battery to battery-gas to gas-powered battery power is seamless; nigh on perfectly executed. Unplugging your car so you can leave for work in the morning is a wonderful feeling, though. Starting up your car and driving dozens of kilometres with nothing more than wind noise and tire noise and some whirring sounds is so easy yet so enthralling. Boring it is not.

For auto enthusiasts, nothing is more alluring than a car that continues to excite. Perhaps in a decade, the current Volt’s technology quotient will be deemed low, and the feelings it currently inspires may be considered typical. In 2013, however, the remarkably uneventful event that is driving a Chevrolet Volt is a must-have automotive experience.