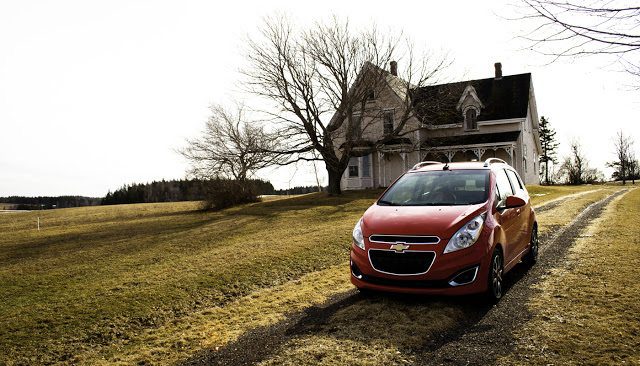 Time after time, test cars are delivered to GCBC Towers and life continues to drift on by. The standard tasks of daily life are in control, and the test cars transport me to the grocery store, Home Depot, and my parents’ place.

Real life is, obviously, a great real world way of testing a car. Haul groceries. Traverse city streets. Scout photo locations. But I’m a car guy, and sometimes the dream of the open road is playing on repeat in my mind, blocking my view of sales stats spreadsheets. The thought of breaking free from mundane suburban life takes centre stage.

It is at that moment that GM Canada delivers an 83-horsepower Chevrolet Spark for more than a week of testing.

Says you: isn’t hauling baby seats in an Infiniti JX a better real world test than completing more than 900 highway kilometres in a Chevrolet Spark, the first city car to come out of Detroit in… ever?

Says I: you can haul baby seats in just about any car by walking into your local car dealer and going for a brief test drive. However, you can’t walk into the GM store and drive away to Prince Edward Island for a long weekend. In the winter. With a dog in her PetCargo crate. Extra pairs of winter boots. A tripod. And much, much more.

And so we began. Within a couple hours of the Spark’s arrival, the rear seats were folded (nearly) flat, which required moving the front seats forward a bit. The dog’s kennel was disassembled outside the car and then reassembled inside the car. The dog was wriggled inside. In went the tripod, my absolutely necessary Glerups, a pair of dress shoes, a medium-sized camera bag, 15 pounds of dog food, two big pillows, my winter coat, my wife’s library book, a reusable grocery bag full of the dog’s accoutrement, one small suitcase, one medium carry-on-sized suitcase, a backpack, a laptop bag, and a baby gate so the dog would stay away from my in-law’s cat.

I used the side mirrors, natch.

Before we’d even left our little corner of the Halifax Regional Municipality, I was noticing the rugged qualities of the Spark’s interior. It might not be built to impress – this is a loaded version of a really basic car, after all – but it certainly feels built to last. It’s all very rubbery. I remember how removing and replacing knobs in a ’92 Mercury Topaz was a two-finger exercise. You can’t do that here.

The buttonless infotainment controls drove me around the bend as the power indentation and the volume controls responded to the fingers of any passenger but almost never to mine. I’d also prefer a traditional needle-based tachometer, not a bar graph. But these complaints, like the way I felt about the too-hard pleather-covered seats, were personal. And my overarching feelings about the interior were positive, mostly because of the absurd amount of space; partly because of a steering wheel that deserves to be held by drivers in GM’s other more costly cars, too.

The Spark is three feet longer than a Smart Fortwo, yet two adults sat comfortably in the back seat later on in our trip. Up front, there’s just enough space so your elbows won’t carve into your passenger’s kidneys.

Leaving the city and merging onto the highway near Dartmouth Crossing wasn’t a terribly slow ordeal, just a noisy one. This wasn’t the last time I’d find the Spark’s 1.2L abrasive, not by any stretch. It also wasn’t the last time I cried aloud for a manual transmission. A manual wouldn’t silence the unrefined 1.2L, but it would allow me to change gears at the appropriate moment, which the 4-speed automatic doesn’t.

While I realize the Spark is an entry-level car, it’s hard to accept an antiquated 4-speed when the car is fully kitted out, and thus not priced like an entry-level car. In conjunction with lively steering and the Spark’s nicely controlled suspension setup, the optional 5-speed manual might be enough to make the smallest Chevy downright fun to drive.

In the meantime, we had 300 kilometres to complete before we could eat my mother-in-law’s birthday cake in Summerside. For us, this meant avoiding the hilly Cobequid Pass in northern Nova Scotia and opting instead for the scenic Wentworth Valley, trying to avoid sleepiness through 53 kilometres of New Brunswick’s boring Highway 16, again trying to avoid sleepiness on the always dull Confederation Bridge, and then hitting some terrific twisty roads on a shortcut through Bedeque, PEI.

Those twisties didn’t turn the Spark into a sports car, of course. Yet apart from jumpiness when it encounters suddenly rising pavement, the Spark handles weather-beaten back roads well. Despite its low limits – P185/55R15 tires hint at that fact – the Spark doesn’t respond unpleasantly when it’s being pushed. Therefore, proper driving roads are more suitable for the Spark than city streets. This was borne out when the Spark revealed its most disappointing qualities in the thriving metropolis of Charlottetown, Prince Edward Island, birthplace of Confederation in 1867, when Islanders themselves decided not to join Canada. Nova Scotians, remember, were founding members of this great country.

I’m certain it wouldn’t have mattered whether we were in Charlottetown or Washington; Ottawa or Oslo. The Spark’s steeply raked A-pillar limits visibility at four-way stops, interrupting objects both horizontal (like people) and vertical (like Miatas).

I felt bad for the pedestrians who had to listen to the underhood clatter. Unless its pointed downhill, which it never was in Charlottetown, the Spark can be heard asking its driver not to accelerate.

Fortunately, highway driving requires little acceleration. Oddly, the Spark’s low power ratings didn’t hinder the cruise control’s ability to hold a steady 68 mph regardless of incline. Nothing suggests to drivers or passengers that they’re being carried along in a car with a 93.5-inch wheelbase. Wind noise isn’t terrible. Passing power exists, in some moderately measurable quantity. Unlike far too many small cars, the Spark’s steering is never twitchy just off centre. Indeed, though the behaviour is definitely not recommended, knee steerers will love the Spark. Don’t ask me how I know.

It’s ridiculously stable, not just by the standards of city cars or small cars or Chevrolets. The Chevrolet Spark is apparently the city car that prefers the highway. It’s a highway car in a city car’s body, a better long-distance commuter than it is an urban runabout.

Handsome as its slightly bigger brother is, the Chevrolet Spark is a bit funny looking. Cars with these sorts of dimensions usually are. As you’d guess, numerous females did say the Spark was cute. Headlights the length of the hood seem like a bit of a stretch to me.

Speaking of stretching, Chevrolet added 54% to the Spark’s basic $11,845 price in our tester. That $6400 price bump to the 2LT trim level includes impressive 15-inch alloys, heated front seats, that really nice leather-wrapped steering wheel with Bluetooth and audio and cruise controls, and Chevrolet’s straightforward MyLink. You can get MyLink in cheaper Sparks, though. In fact, aside from the heated leatherette, much of what you’ll receive in exchange for upgrading from the $15,195-$16,445 Spark 1LT is cosmetic.These prices are concerning, but not as much as Spark pricing is in the United States. The $12,185 USD base price contributed to the Spark’s Bad 8 entry at GoodCarBadCar.

It can be difficult to reconcile an 83-horsepower, $18,245 car that lacks outstanding fuel economy with the idea of an automatic-equipped $18,995 Kia Rio EX or a Fiat 500 Sport which, when equipped with a 6-speed automatic, currently sells for $17,895. The Rio isn’t as blazingly unique; the Fiat isn’t as capacious. Both have significantly more power than the Spark.

So the Spark is underpowered and overpriced. But aside from the increasingly rare breed known as tire kickers, prospective Spark customers knew this already. No longer do car shoppers walk into a dealer completely unaware of a car’s specification or possible payment plans. You know the Spark is underpowered and overpriced, but you’re interested anyway. And now, because of GCBC’s lengthy encounter, prospective Spark customers are aware of the littlest Chevy’s propensity for carrying Suburban-like loads on long highway drives to small Canadian islands.

Still, GM small car buyers have been alerted to the presence of another product: the roomier, more powerful, better looking, similarly efficient Chevrolet Sonic. In the Spark’s best Canadian sales month so far, Sonic sales were 22% stronger. Since the Spark went on sale south of the border – where it’s turned out to be unusually successful – the Sonic has outsold its little brother 3-to-1.

Why? The Chevrolet Spark may be surprisingly free from the compromises one expects to find in twelve-foot-long city cars, but the Chevrolet Sonic doesn’t cost much more. Besides, like the Spark, the Sonic is allowed to take long highway drives to Prince Edward Island, too.