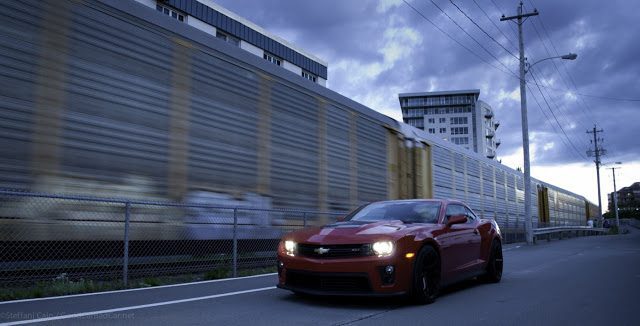 I’m sorry, but my life doesn’t switch over to an evenings-at-the-dragstrip, weekends-at-Laguna-Seca existence simply because a Chevrolet Camaro ZL1 lands in my driveway.

GoodCarBadCar’s unlimited budget for premium-grade fuel and an infinite supply of Goodyear Eagle F1 tires is… well, there’s no such budget.

Life continues as per the norm when a 580-horsepower Camaro ZL1 arrives at GCBC Towers. 556 lb-ft of torque won’t change the fact that my niece needed to throw her luggage in the Camaro’s trunk.

A vast front splitter can’t put a halt to my requirement for a load of groceries. Even with 65 pounds of downforce at 241 km/h, I still need to pootle across the Angus L. Macdonald bridge at 50 km/h for 1300 metres.

A carbon fibre hood insert doesn’t stop the seagulls from defecating, although the noise emanating from underneath the carbon fibre does prompt the sparrows to stop their singing.

I demand from a test vehicle the ability to join with me in living a normal life. A car’s knack for accelerating to 60 mph in four seconds flat doesn’t change that. Allegedly lapping the Nürburgring in 7:41.27 won’t magically remove the potholes and pseudo-speedbumps in downtown Dartmouth. Topping out just six clicks below the 300 km/h barrier is mostly irrelevant, given the limits foisted upon me when travelling down the TCH. I need usable real world performance in a usable format. 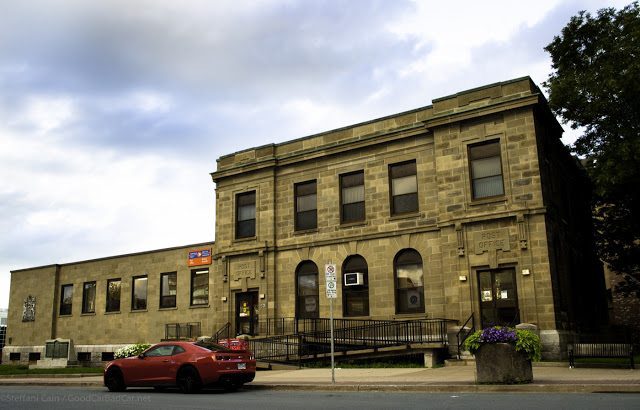 Would I have enjoyed the Volkswagen Golf R half as much if it wasn’t a roomy 5-seat hatchback? If the Ford Focus ST’s ride quality wasn’t, “superior to that of most small cars which don’t make handling their prerogative,” would I have been impressed at all?

Maybe I’m not telling the whole truth. Maybe there are certain exemptions from my real world automotive performance rules. Maybe, if a car makes a noise like this, I don’t care what else it does, can do, or can’t do.

You can argue that emphasizing the ZL1’s noise doesn’t accurately portray a car’s real life potential. But you’re wrong, I tell you. Daily life continued during my time with this Camaro, and I was utterly consumed by what sounded like the offspring of a mama grizzly and the king of the jungle. This child of an angry bear and a hungry lion roared and barked and growled and snarled and howled at the slightest provocation of the throttle pedal: reversing slowly out of my driveway, meandering through the grocery store parking lot, leisurely strolling past three HRPD Crown Vics on my very first drive.

It’s true, throughout my week with the ZL1, a large part of me ignored everything else that was good and bad about the Camaro because its full-throated bellowing was intoxicating, savage, and downright transcendental.

Every time I stopped to think about how the ZL1 fits in the automotive marketplace – which was hard to do since I couldn’t hear myself think – I realized that there was very little stopping me from labelling the Chevrolet Camaro ZL1 as a daily driver.

Undoubtedly, the few issues that do exist are rather serious. Visibility in many a modern car is dreadful, but in the Camaro, even seeing out the front is a challenge.

The windshield header is low, the pillars are wide and angled in such a way as to stop you from seeing what’s coming from the left and right, and it feels as though the rearview mirror interferes with much of what you could see. For many buyers, poor visibility will be more than enough reason not to buy the car.

If any car was permitted to drink excess amounts of fuel, this ZL1 would be it, wouldn’t it? Nevertheless, 17 litres of premium for every 100 kilometres of city driving, while not legally restraining you from making the Camaro a daily driver, will probably limit how much you drive it on a daily basis. Around here, the Camaro’s consumption means 100 kilometres currently costs me $23.56, nearly a quarter per kilometre.

Of greater consequence to forum trolls and barroom brawlers who drive ’03 Cavaliers and ’99 Escort ZX2s is the presence of Ford’s 662-horsepower Shelby GT500. The Mustang and Camaro have been, currently are, and forever will be rivals. But they’re two wildly different cars, not only because of their very different rear suspension formats but because of how they look; because of the customers who favour them. The ZL1 comes second in the numbers game, but Chevrolet doesn’t build hi-po Camaros because GM thinks it’ll roll a Mustang owner’s socks up and down. 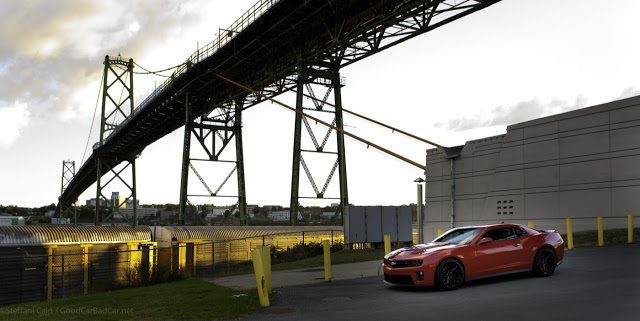 Complaints about the Camaro’s cheap interior are much less valid in the suede-covered ZL1. At the very least, the Camaro’s interior has a moderate sense of style. Equipment levels aren’t high for a $60K car, as the money you’re spending is most certainly spent on other performance-oriented parts. Chevrolet’s touchscreen verges on the invisible in low light, cargo space is decent but the trunk opening is narrow, seatbelts are really hard to reach, and the rear seat is only child-friendly.

But the ZL1 produces a noise that makes grown men cry out for mommy. Honestly, the noise is more obvious than the ZL1’s outrageous power. Naturally-aspirated V8-engined Camaros are wickedly fast, as well. Modern turbocharged 2.0L hot hatches are bizarrely quick. Sure, the ZL1 conquers the quarter-mile in less than twelve seconds, and it can do so in foot-to-the-floor launch control mode. For a car that weighs more than 4100 pounds, the Camaro is rather surprisingly fast through twists and bends and curves, too. But this experience remains noise-centric. 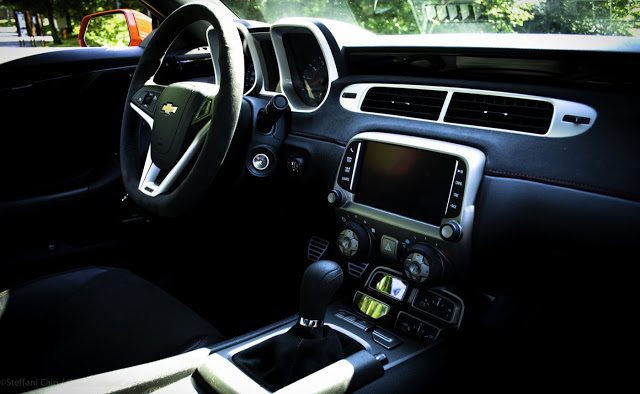 Pushing hard through corners is a little nerve-wracking at first. For that matter, it’s still disconcerting the second and third time around. Only with time can the ZL1’s driver start to learn where the Camaro ZL1’s corners are and how the car will respond when, upon exiting a downhill hairpin, you realize you prematurely applied the throttle.

The end results are manifested in a ZL1 that’s docile. It’s a mama grizzly that growls but doesn’t bite; a lion that roars but doesn’t hunt for unsuspecting prey. Nothing makes the ZL1 feel more genteel than its gentle ride. This Camaro lopes along like it has all the suspension travel in the world. Thank-you, magnetorheological dampers.

So much about the Camaro ZL1 feels so mechanical. There is not much in the way of traditional dynamic feel, that which communicates to you the constant interaction with the road à la Subaru’s BRZ, but there are a lot of things to feel. A thrust of the shifter from first to second gear sets off a cacophony of wonderfully industrial sounds in front of, underneath, and behind the driver. Come in touch with a hint of gravel and you’ll be wincing as it sprays the wheelwells for minutes. As a unit, the whole Camaro does a V8-inspired wibble-wobble, even at idle.

When not driving, I spent much of my week with the 2013 Chevrolet Camaro ZL1 thinking that this car’s extreme nature, high price, and outlandish exterior design made for something silly, a dream car for the muscle car enthusiast who already owns a ’67 Camaro and Jim Rockford’s Firebird.

By day three, however, I realized that if Camaros are going to look crazy, they might as well look this crazy. On day four, the gearbox and clutch and I became friends. Day five? These seats have just the right amount of cush and bolster. By day six, the noise and power overwhelmed the lack of visibility. And on day seven, I filled up the ZL1 with premium fuel, which threw cold water on the fire.

To review the ZL1 as though it’s a normal car is to miss the point entirely. This isn’t a count-the-cupholders kind of car. Yet to imply that nothing matters beside the power is to deny the fact that performance cars, even the ultimate 4100-pond OEM muscle cars, must do more than accelerate.

In an era that sees Kia building a 293-horsepower front-wheel-drive sedan and $166,000 Porsche SUVs generating 550 horsepower, the Camaro nameplate must possess something special to set it apart from conventional cars. In the ZL1’s case, that special something could be its talent for putting prodigious power to pavement. Or, in an unlikely twist, the special something could just as easily be the Camaro’s ability to cosset and carry on with everyday life.