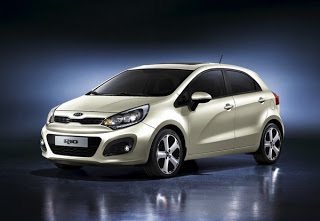 Sharing a 101.2-inch wheelbase and an engine lineup, the design paths of the 2012 Hyundai Accent and 2012 Kia Rio diverged in a wood, and Kia chose the more stylish route. That’s not to say the 2012 Hyundai Accent isn’t a handsome hatchback, GoodCarBadCar.net sees huge sales in its future, even more so after driving a 2012 GL Sedan. But from the rear, the 2012 Kia Rio is undoubtedly (beauty-in-beholder’s-eye factor notwithstanding) a more cohesive package. Moreover, Hyundai’s images of the new Accent make the hatchback’s wheels appear terribly tiny when viewed from the rear three-quarter. The Rio, on the other hand, has strong five-spokers which could fool you into thinking this is the sporty high-output Rio derivative.

This is by no means the first time The Good Car Guy has thrown two Hyundai/Kia platform-mates into an image comparison. Some of the more popular posts on GoodCarBadCar.net include the Kia Sportage vs. Hyundai Tucson photo comparo as well as the Kia Optima vs. Hyundai Sonata contrast from this past November. Of course, the new Kia Rio and the new Accent must face off against other rivals, too. The 2011 Ford Fiesta is a capable, high-tech, fuel-efficient hatch with the now desirable Blue Oval badge. The Honda Fit is a tremendously roomy hatchback, one that’s surprisingly fun to drive. And Ford’s disconnected sibling, the Mazda 2, is attractive and more fun overall than the Fiesta.

Nevertheless, these eight images are meant to showcase the differences between two Korean hatchbacks, vehicles which will invariably feature low MSRPs and heady levels of equipment. We already know the Accent will be fitted with 6-speed transmissions and a full slate of safety gear – one would assume the Rio won’t go without such niceties. Kia’s press release for the 2012 Rio says some markets will also receive a 3-door hatchback and 4-door sedan. So there will be differences (the Accent is a 4-door sedan or 5-door hatch only) in the cabin and perhaps even the driving experience, but the most unique aspects of these two cars is surely the exterior design. Until more pictures become available, satisfy yourself with the two 2012 Kia Rio Galleries and The Good Car Guy’s brief analysis after the jump.

Not too many years ago, we would’ve paused a moment and contemplated the largesse of the Rio’s headlamps. Now, the over-the-top front end seems simply to be a uniquely Kia take on the typical OTT front fascia. The gaping air intakes remind me of the 2011 Volvo S60 (its photo gallery can be seen here) while the narrowly connected grille is the main connector to the 2011 Kia Optima. Merely noticeable from the front, the scalloped sides of the 2012 Rio are downright eye-catching when you stare straight at the Rio’s taillamps from the corner of the car. Arching straight through the door handles, the two character lines which cause the concave surface help the small hatchback escape without appearing hefty while at the same time provoking visual interest. Details like the Kia badge sitting atop the trunk release are the sort of thing you wouldn’t have expected to see so nicely turned out on a Kia of yore.

The 2012 Kia Rio’s rear has something of an old Seat Leon look to it, but it’s also a little Ford Of Europeish. These aren’t bad things, and no copycat criticism should be laid on a company for its latest hatchback. It’s a two-box car – there are only so many places you can take a product with an engine room, a cabin, and four wheels.

On to the Accent, the overall look is a little bit safer; a little bit more mature; a little bit more of what you’d expect. Let’s not get ahead of ourselves: both cars are pleasantly-styled; neither car is ahead of the game or one bit avant-garde. Even so, where the Rio is more stylish in the moment, the Accent is clean and purposeful and features less you could dislike. Parked side by side the Accent might seem a little boring, but we should give credit for a few strong features. 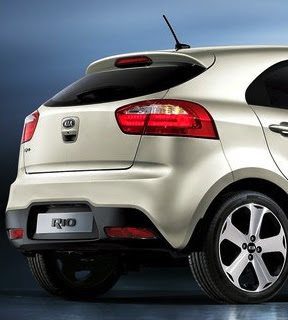 First, the hood’s shutline is enormously apparent but the eye remains drawn to a dose of character as things go concave where normally you’d see power bulges. In the same spot on the rear of the car is a lip just below the rear window that contributes to a very BMW 1-Seriesesque presentation. It’s also obvious from the rear that this car, like the Rio, seems to offer a narrow slit for a backlight. That’s a sacrifice for style. In these initial pictures the Accent looks to be the longer, lower car, truly a trick of designers and/or photographers. Besides that strange concave shape on the hood, there are a few other regions of the car that make the Accent look like the serious big brother of the two. 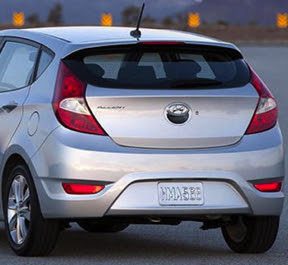 There’s droopiness over the license plate surround at the back. There’s extra glass behind the rear door windows that the sportier Kia doesn’t have. And that lip below the hatch’s window must be there for a reason, and the reason can’t be straight up style.

All in all, judging only on appearances, the Accent will look more current in ten years; the Rio is cooler now. And why do the exterior designs of two subcompacts matter so much to The Good Car Guy? Aren’t these econoboxes acquired based on the best deal available? Consider this: in a thousand ways, the 2012 Kia Rio and 2012 Hyundai Accent are the same car. Driving them won’t feel all that different. Paying for one won’t be dramatically more expensive than paying for the other. Fuel economy will be the same. What’s that leave? Style, my friends, style. Look as good as you can.