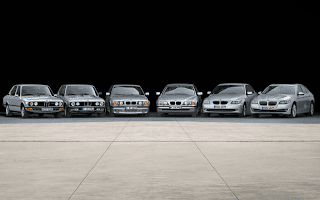 2011 BMW 5-SERIES GALLERY – IS IT REALLY BEAUTIFUL, OR JUST IMPROVED?

Well, whaddya think? Has BMW regained design supremacy in the crowded luxury sedan class with this, the 2011 BMW 5-Series? In Munich’s nomenclature, this generation of 5s will be known as the F10. Currently ending its tenure is the controversially-designed but highly successful E60. Before that we enjoyed the classy lines of the E39, the elegant E34, the reputation-building E28, and the foundational E12.

So is this new F10 5-Series actually a genuinely handsome automobile or are we simply thankful that BMW laid aside the eyebrows of the E60? And really, does it matter? Do 5-Series buyers flock to the mid-size BMW because the Audi A6 is too out there while the Mercedes-Benz E-Class is too staid? Do 5-Series buyers become 5-Series buyers because of the 5’s reputation as the sportscar of the mid-size luxury class; not because of aesthetic tastes (or lack thereof)?
Check out pictures of the 2011 BMW 5-Series Touring
Enough questions. Let’s get down to the nitty gritty. The ’11 5-Series is a very big car. Positioned with what can only assume is typically sublime BMW balance atop a 116.9-inch wheelbase, the F10 5-Series actually shares a platform with the full-size 7-Series, and thus the upcoming “small” Rolls-Royce. You know this is a big car now.
For North American owners, turbocharging will be standard fare with the new 5-Series. A single turbo fitted to a 3.0L inline-six will produce 300-bhp and 300 lb-ft, just like the current twin-turbo six. Twin-turbocharging a 4.4L V8 brings about 400 horsepower and a groundswell of torque: 450 lb-ft at just 1,800 rpm. Remember the E39 M5’s 4.4L V8? That car, one of GoodCarBadCar.net’s 100 Favourite Cars, generated a blissful 400 horsepower without the aid of turbos but was by no means a torque monster.
Struts are no longer the order of the day on a 5-Series’ front suspension. Multilinks take their place. Honda would approve. Automatic gear ratios abound with eight speeds in all. The six-cylinder is available with a 6-speed manual, as well. Stripping the turbo off the inline-six later on in 2010 or in early 2011 will result in a 240-bhp option, the 530i, perhaps? Slotted in beneath the fast 535i and the wicked fast 550i, a 530i (or 528i?) would be an awfully nice vehicle for somebody who wants a 3-Series but simply needs more space.
There’s no way the 5-Series is competition for the Mercedes-Benz CLS-Class style-wise. In fact, the 5-Series might not look as good as the Audi A6 either. Nevertheless, the 5-Series looks better than it used to and, for a time, will be the newer/brighter/shinier/fashionable German sedan. And that, oh Good Car Nation, will just be one extra reason the F10 2011 5-Series will be hugely successful. Check out all 83 pictures of the new BMW 5-Series in the Gallery below.