How do I break it to them gently? The people at Ford Motor Company, I mean. Don’t shout it out; just whisper. Apparently they have no clue that their “redesign” and coupe introduction had little-to-no effect on young buyers.

I recently heard a Focus-class buyer (the kind of person this site is really meant for, first-time buyer of a good but inexpensive car) suggest that the Ford Verve concept would actually cause them to consider a Ford. (Read about the Verve here.) However, the North American Focus, a car once full of flair and uniqueness, no longer holds any reputation of that kind. Boring, aged, and dull; a letdown.

Therefore, Ford intends to show you (via the SEMA show) nine modified versions of its 2008 Focus. F2 Motorsports, Street Scene Equipment, RKSport, Hot Wheels, Steeda, 3D Carbon, Fox Marketing, and Ford itself tuned and repainted and reinstalled and big-wheeled and luxed-up sedans and 2-doors to show you the potential in each and every Focus.

There’s no denying it: the Focus has always been a good drive. I recall hearing people in recent months or years complain about receiving a Focus as their rental car. Hey, at least it goes ’round corners well and communicates with the driver.

But boys, give me something fresh. Nine modified Foci? I want the Focus they buy Across The Pond. Offer me the Volvo 5-cylinder in ST form like you do the Europeans, Ford. Give me a somewhat boring, but classy, redesign like you gave the rest of the world when the Focus was reengineered. Forsake not your own backyard, Ford. And don’t push nine Foci upon the SEMA crowd with hopes that the media will then use that to get the public excited. It’s not enough. 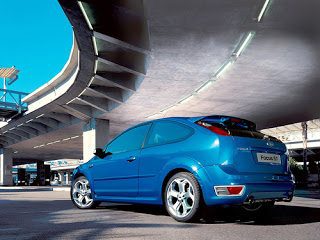