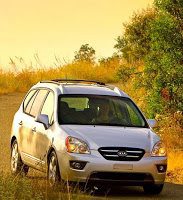 Without an official count (a count you can do at GoodCarBadCar.net’s Recall section), it seems as though, more often than not, NHTSA recalls affect fuel. In reality, cars aren’t very dangerous without fuel. Thrust gasoline into the mix and the assorted devices that hold it, pump it, and suck it, and the safety administration gets frightened.

And they find problems. This time, the problem rests under the Kia Rondo. Rondos from model years 2008 and 2009 – 6,680 of them – that are equipped with the 2.4L four-cylinder may have a weak fuel pump. If not enough fuel gets to the engine, igniting could be difficult; stuttering could be bothersome; and more severe impairment could be dangerous.
Kia will be replacing the fuel pump sub-assembly with an “improved part”. I should hope the part wouldn’t be worse than the first.