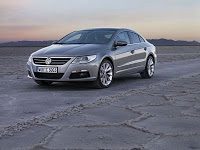 A handful of ’09 Volkswagen Passats, Passat wagons, and Passat CCs will be recalled because they “may have an electromechanical steering gear control unit that can malfunction due to a damaged capacitor”. That basically means that where you point the car and where the car goes may not be associated. Problem arisen.

Before you shout to your friends that Volkswagen has built 130 cars that steer the opposite direction of where you turn, let me remind you that this hasn’t been happening over 5mph and it’s only been happening immediately after the vehicle’s started. Nevertheless, “the driver’s steering input is not properly processed”? That is scary stuff. Early in December Volkswagen will begin this Recall by simply replacing the steering gear.

As an aside, let it be known that The Good Car Guy’s previous disgust with the Passat CC rests now only on its purposelessness, not on its appearance. However, seeing the Passat trio together revealed that the regular Passat wagon is still a better looker than the Passat CC and their less expensive brother, the Passat sedan.