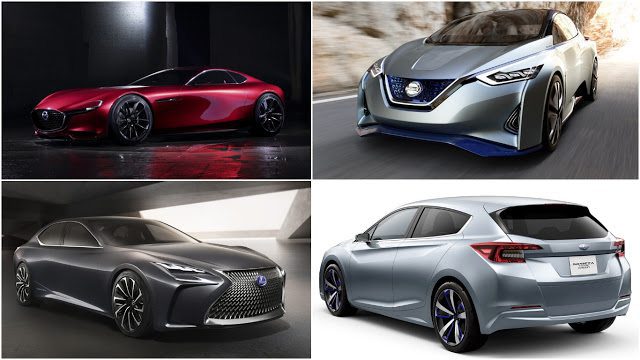 TOKYO
The 2015 Tokyo Motor Show has hosted a handful of interesting debuts, other bizarre showcases, and some meaningful introductions. The Lexus LF-FC previews the next-generation LS, Lexus’s flagship sedan. Think of Mercedes-Benz’s Vision Tokyo Concept as an R-Class of the future with a hydrogen fuel-cell and autonomous everything. You can imagine the Honda Clarity Fuel Cell taking on the Toyota Mirai at a hydrogen fuel station near you.

How recent did the last excited enthusiast conversation regarding the hope of a production Nissan IDx take place? Forget frugal driver-centric fun: it’s time for an autonomous Nissan IDS Concept. Mazda insists they generally want to bring rotary power back from the grave – the RX-Vision Concept is a start. (But how dare they steal Mercedes-Benz’s oft-used Vision tag.) In terms of actual production cars, Porsche has GTS-ified the Macan. The Macan GTS’s twin-turbo 3.0L V6 now generates 360 horsepower and 369 lb-ft of torque, features upgraded brakes, adds standard air suspension, and sits very low to the ground on 20-inch wheels. The Subaru Impreza 5-Door Concept is clearly a concept, but when can hope Subaru injects the production car with some of the concept’s smooth surfacing and much of its aggressive stance. Imagine what might happen to the rapidly growing Subaru brand if all their cars got pretty?

FUTURE
Automotive News reports that the next-generation of GM’s Lambda platform crossovers will feature two wheelbase lengths. The GMC Acadia will ride on a shorter version along with a new Chevrolet crossover; the Enclave and Traverse will continue to be vast.

RECALL
BMW is recalling 86,018 copies of the Mini Cooper (model years 2002-2005) because they, “may experience temporary or permanent loss of the electro-hydraulic steering assistance.”

Rival German automaker Mercedes-Benz, meanwhile, is recalling 2618 copies of the B-Class Electric Drive (model years 2014 and 2015) because, “the electric powertrain unit may shut down, temporarily immobilizing the vehicle and resulting in a loss of propulsion power.”

WATCH
Mitsubishi named their concept for the company’s home market auto show after the trim level of an high-grade Honda Accord. Could the Mitsubishi EX preview an upcoming Outlander Sport/RVR?