The U.S. market, long in need of an affordable, compact, rear-wheel-drive sports car, allowed the hype to initially take hold. The Scion FR-S’s best ever month was its first full month of availability – June 2012 – when 2684 copies were sold.

Regardless, only 18 months into the car’s tenure, monthly declines became notable because of their severity and consistency.

The demand for the newest, flashiest, fastest thing has historically limited the long-term appeal of coupes. But coupes and more genuine sports cars are not forced to sell less and less often as time goes on. The big Dodge Challenger muscle car posted its sixth consecutive year of growth in the U.S. in 2014. U.S. sales of the Chevrolet Camaro climbed to 86,297 units in 2014, the latest Camaro’s second-best year since returning in 2009. True, those cars compete in a different market, they represent true Americana, and their product ranges are broader and thus more appealing to a wider cross-section of the car-buying public. But shouldn’t that be to their credit, rather than used as an excuse for the FR-S and a wide variety of other sports cars which simply can’t appeal to a large number of consumers for more than a few months? 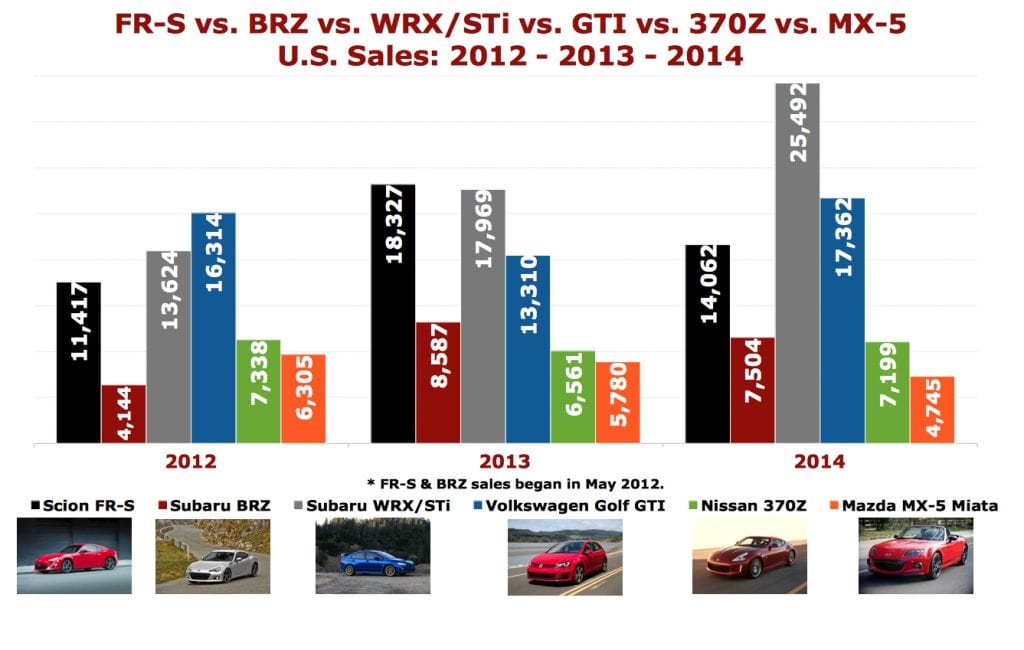 Even if you’re not a Toyobaru fan – and we all know certain individuals aren’t – we enthusiasts need cars like this to succeed for a longer period of time if we’re to see potential competitors in the future. Would General Motors seriously consider building the Code 130R after seeing the rate at which FR-S volume dries up? Will Nissan bosses follow through on building the IDx in the long-term after taking a look at the FR-S’s consistent decline? Can Kia commit to an affordable GT4 Stinger with FR-S volume falling to new lows?

The answer to all those questions could be, “Yes!”, if product planners determine that the FR-S’s steady decline relates to factors beyond the car’s core format. Might the FR-S’s downturn relate as much to its Scion branding as it does to the mostly useless rear seat? Could the FR-S be turning into a truly niche player because Toyota isn’t building a convertible? Are potential FR-S buyers turned off by the low-torque four-cylinder engine?

After all, new vehicle buyers in 2014 displayed their willingness to acquire new sporting cars without Scion badges, with useable rear seats, with torque, and with different bodystyles: Subaru’s own Impreza-based WRX/STi outsold the FR-S and BRZ combined.

This post also appears in full today on The Truth About Cars.