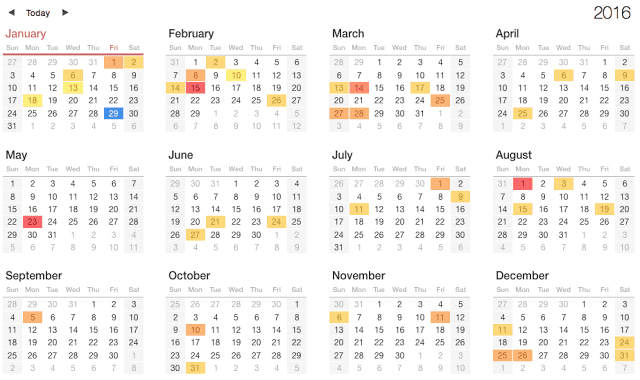 2016 Monthly Auto Sales Calendars And Selling Days For Every Month

In 2010, two issues prompted AutoNation CEO Mike Jackson to begin reporting monthly sales figures for the company’s 300+ dealers. One: the auto sales calendar was, and is, a mess. Two: there was no separation between fleet and retail sales data.

We can’t do anything about either complaint. In fact, on the second count, there would still be limitations to the transparency of the data even if we could publish firm, actual fleet sales figures for every model.

There is, after all, such a thing as a good fleet sale and such a thing as a bad retail sale. For example: would you rather sell five $24,000 Camrys to a rental car agency or two $19,000 Chrysler 200s with 0% interest over 84 months? We look forward to a day when fleet and retail sales could be published in detail, but we fear that instantaneously drawing hard and fast conclusions from fleet numbers would lead to a number of inaccurate conclusions.

As for Mr. Jackson’s AutoNation, Automotive News reports that the company’s monthly sales reporting has come to an end. AutoNation’s tactics have not moved the industry toward greater transparency or a proper calendar. Nevertheless, to Mr. Jackson, we tip our hat.