U.S. Monthly Sales In 2010 – Toyota Camry vs Honda Accord vs Toyota Corolla/Matrix

Much has been said of late regarding the Toyota Camry’s downfall. Yet, in November 2010, the Camry was America’s best-selling car. Just like it was in October… and September… and August, July, and June, too. Not since May has the Toyota Camry’s main rival, the Honda Accord, inhabited the top spot. To be fair to those who’ve cast doubt upon the Camry’s ability to stay at #1 in 2011 – since I was one of “those” those – Toyota has suffered huge Camry sales declines in 2010. November Camry sales were down 24.3%. Year-to-date sales through the end of November are off about 8%.

Meanwhile, Honda Accord sales are up 6.6% from 2009 levels. (Toyota car sales in general are down, so you won’t be surprised to learn the Corolla/Matrix tandem is down 8.1%.) What really catches the attention of auto observers, however, aren’t the slightly rising Accord sales or the year-over-year Camry downturn but the more recent trend toward Camry rejection. That’s a trend that must again be raised in conversation with a major caveat: all this “rejection” by Altima, Sonata, Fusion, Malibu, and Accord buyers hasn’t been enough to unseat the Camry as America’s best-selling car, but yes, people are shying away from the dull Toyota. Camry sales in October were down 17%.

Seasonal differences dramatically alter the buying habits of the American populace, but the dropoffs at Toyota appear painful nonetheless. July totals were over 35,000, August and September were over 30,000, which fed into October’s 25,014 and then November’s 20,737.

Can rival automakers pull a fast one on a company as mighty as Toyota? Will Toyota make the mistake of designing another dull Camry? Or could Toyota be ready to surprise us all with a stylish, efficient, fashionable, reliable Camry that’ll take a firmer grasp of the #1 position? Or is this recent batch of bad news for Toyota not so bad after all and just an anomaly anyway?

The Graph below looks more closely at the sales trends of America’s three best-selling cars in 2010. 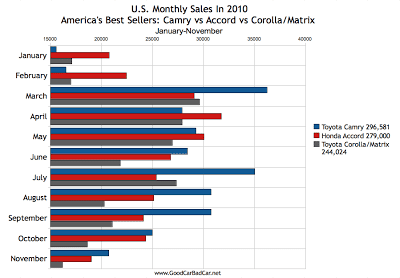