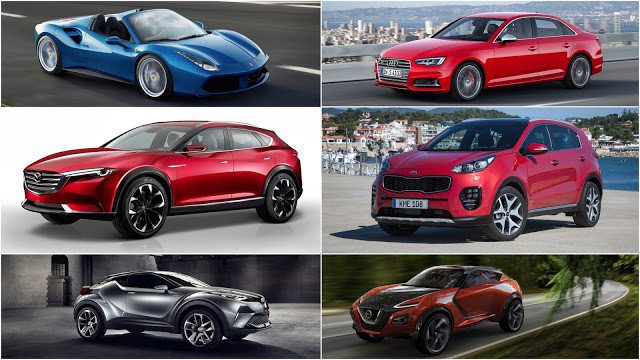 NISSAN
Will Nissan replace the 370Z sports car, which is selling very rarely these days, with a sports car/crossover? The Gripz – note the letter z at the end of the name – could be that vehicle, or it could simply be a styling exercise that previews the second-generation Nissan Juke.

FERRARI
The Ferrari 488 Spider is the droptop version of the 488 GTB you would buy if you could, and if the 488 Spider didn’t exist. And what a colour the showcar debuted.

AUDI
The next-gen 2017 Audi S4 loses the former car’s available manual transmission. Unfortunately, just as the new A4 looks just like the last A4, the new S4 looks like the last S4. Perhaps with less aggression. More A4 2.0T Prestige than performance-oriented S4.

TOYOTA
This is not a production version of a subcompact crossover that will appear in North America as a Toyota, or even a Scion. But the Toyota C-HR Concept from the Frankfurt auto show confirms that Toyota is getting ready to battle the Honda HR-V, Jeep Renegade, and Subaru XV Crosstrek, among many others.

MAZDA
The CX-5 is a hit. The CX-3 will likely be a hit. Now Mazda needs to replace their CX-9, a very low-volume player in a popular three-row crossover category. The Koeru Concept from the Frankfurt auto show is handsome, but will need more headroom in the third row if it’s to end up as a CX-9 replacement. Perhaps the Koeru previews a middle-rung rival for the Ford Edge and Nissan Murano instead.

WATCH
AutoGuide’s Craig Cole takes a closer look at the surprisingly affordable Jaguar F-Pace. You’ll want to take a closer look, too, when the new SUV arrives at a Jaguar dealer near you.