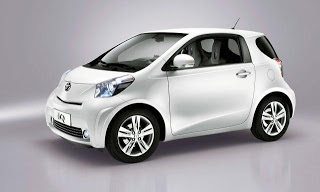 The iQ, Toyota’s new microcar, first seen here in August of last year, has been revealed in production form.  And Toyota isn’t joking around.

With production beginning this year, the turnaround time from concept-to-showroom won’t take long. Not only will the timespan be short; so will the car.  Although the iQ will be about 29cm longer than a smart fortwo – its most obvious competitor – it will offer folding rear seats, something no fortwo lays claim to.
What else be told?  Apart from interior details and the completely unnecessary explanation of Toyota’s “J-Factor” design; not much.  It will clearly depend on the region in which you live, but Toyota will be equipping the iQ with two gasoline-powered engines and one diesel.  Toyota is making use of extra-small HVAC units, a flat fuel tank, and a newly developed differential that contribute to less space under the hood and more space in the interior.  Toyota suits believe small doesn’t equal basic, and it’s believed that small may not even equal small inside the iQ.
Oh, and Toyota will begin with an annual production rate of 100,000. Along with the smart fortwo, Volkswagen will likely be making lots of noise about the up! before long.